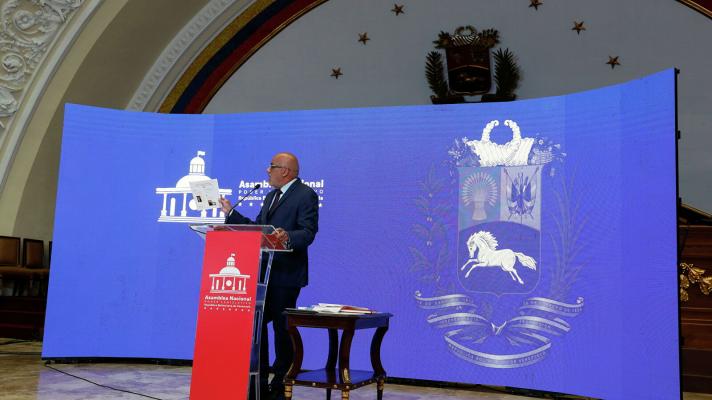 At a press conference at the headquarters of the Federal Legislative Palace in Caracas, the president of Venezuela’s National Assembly (AN), deputy Jorge Rodríguez, exhibited items of evidence that connected the planning and financing of paramilitary armed groups in Caracas with members of the Popular Will (Voluntad Popular or VP) political party and the Colombian government, linked to the recently foiled assassination attempt of President Nicolás Maduro.

The government of Iván Duque is at the center of the plot, responsible for the Colombian control of drug trafficking routes, the paramilitary groups that sustain themselves through illegal trade, and the export of militarized mercenaries.

Operation Gideon, an armed invasion in May 2020, was derived from this international criminal network, and planned by members of the failed “Guaidó project” with the collaboration—tacitly at the very least—of the Colombian government. Recent events in the Caribbean have confirmed Colombia as a hotbed for mercenaries and hitmen sought after for assassination contracts and terrorist destabilization.

Following the attempted drone assassination of President Maduro and individuals in Venezuela’s military and political high command in August 2018, the location of camps where the operators of the explosive drones were trained had been revealed. The evidence was shown again during Rodríguez’s press conference to demonstrate the commonalities among systematic attacks from the neighboring country.

Miami is also involved in the criminal network alongside Bogotá, as revealed by the links between the presidency of Colombia, the Miami-based mercenary company CTU Security, and the 2018 assassination attempt on the Venezuelan Head of State.

Colombian media outlets reported on the relationship between President Duque and Antonio “Tony” Intriago—the owner of CTU Security, responsible for recruiting the assassins of Jovenel Moïse in Haiti—dating back to at least 2018.

In addition, Rodríguez asked if the visit of CIA Director William Burns to Bogotá [in June] had anything to do with recent events in the region, taking into account the statements of the Colombian ambassador to the United States, Francisco Santos, who said in an interview that US intelligence was involved in “a delicate and important operation” days before the Cota 905 terrorist events in Venezuela and the assassination of Jovenel Moïse. President Maduro had also noted this “coincidence” during his report on security forces deployed to extirpate the El Coqui gang from Caracas.

In this way, it can be shown that the current Colombian president has become a real threat to peace in the region.

New assassination attempt
The AN president announced that four drones were deactivated on June 22, the date of the inauguration for a new monument in Carabobo Field, and said that additional details will be provided shortly regarding that operation. He also showed evidence that snipers planned to directly attack the Venezuelan president in Caracas, from El Valle, during the military parade for Venezuela’s independence on July 5.

National milestones seem to be the preferred dates chosen by Venezuela’s extremist right for their violent coups: on February 12, 2014 [Dia de la Juventud], the failed color revolution La Salida was initiated, on July 5, 2018 they were going to try to assassinate the Venezuelan President, followed by the attack with exploding drones on August 4, 2018 [Bolivarian National Guard day]. The landing of Operation Gideon was scheduled for May 1, 2020, and now these latest plans thwarted by the security forces.

The reason why national milestones are chosen to perpetrate conspiracies can be related to the attempts of Popular Will and its criminal partners to create both material and symbolic shocking events to greatly impact the Venezuelan population and generate an increased disturbance of public order.

According to government investigations, the weapons of war used by the armed groups of Cota 905 and other areas of Caracas were provided by the Colombian regime. Using the logistics and infrastructure of the El Coqui gang, they first planned to carry out the assassination of President Maduro on July 5, and then create street violence, as a constructive chaos for anti-Chavista interests, on July 6 and 7—which they did—in order to “set the prairie on fire.”

Through sentry boxes and trenches in the areas surrounding Cota 905, the Coqui paramilitary gang proposed to carry out direct operations against the revolutionary leadership of Venezuela. The mountainside in El Valle specifically afforded a complete view of the Military Academy and the presidential platform of the Paseo Monumental [Paseo De Los Próceres], thus presenting an ideal placement for a sniper.

Rodríguez showed a video from the cell phone of one of those arrested during Operation Gran Cacique Guaicaipuro that revealed these objectives. Police and intelligence investigations concluded that July 5 was the planned date for the sniper execution of the president.

Popular Will’s role in the new chapter of terrorist violence
Next, the president of the AN presented screenshots that showed that VP prepared, armed, and financed the paramilitary gangs of Cota 905 and La Vega for coup purposes, to carry out terrorist operations against the civilian population.

The screenshots presented by Jorge Rodríguez were obtained from Freddy Guevara’s phone, after he was detained by order of the Public Ministry for his “links with extremist and paramilitary groups associated with the Colombian government.” All the mentions about the “screenshots” make it clear that they should be deleted. The head of Parliament explained that the evidence was restored with a simple data recovery software.

It is not a surprise that VP is at the forefront of the unconventional war on Venezuela, as its record speaks for itself and demonstrates that it should not be considered as a political party but rather as a terrorist organization.

Let’s quickly list the content of the chats which confirm that the so-called “Fiesta of Caracas” (the paramilitary and terrorist events of July 7 onwards) was promoted by Leopoldo López from Madrid through instructions to Gilber Caro, Freddy Guevara, Hasler Iglesias, Luis Somaza, Alfredo Jimeno, Yon Goicoechea, and Emilio Graterón, all members of VP. 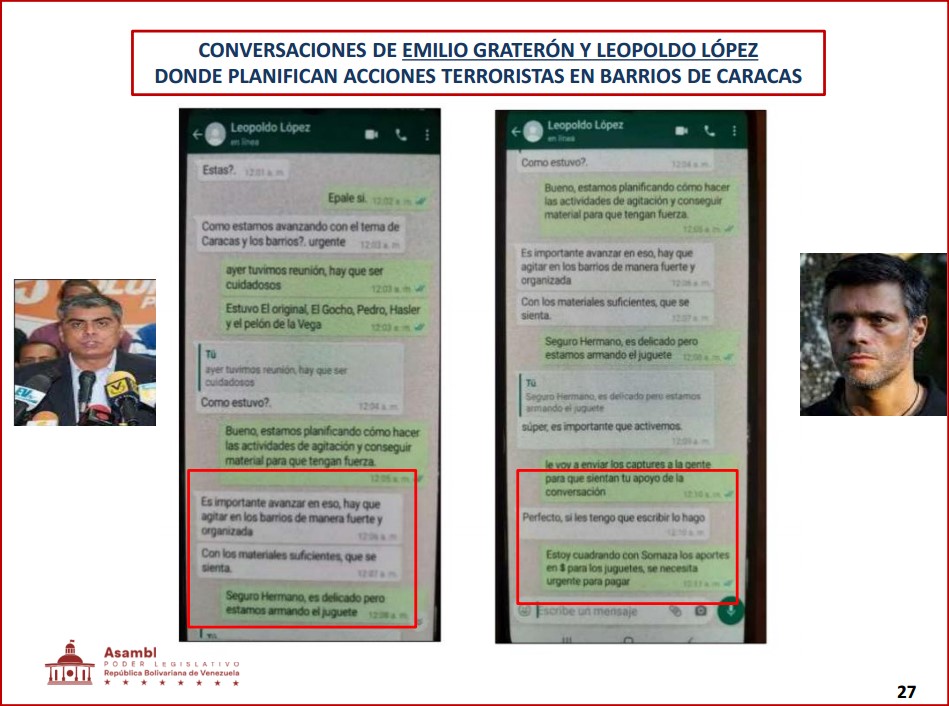 Guevara tells Caro that the Fiesta de Caracas “is on track” and that he will speak with Iglesias “to square up activists” (protestors to create civil unrest). 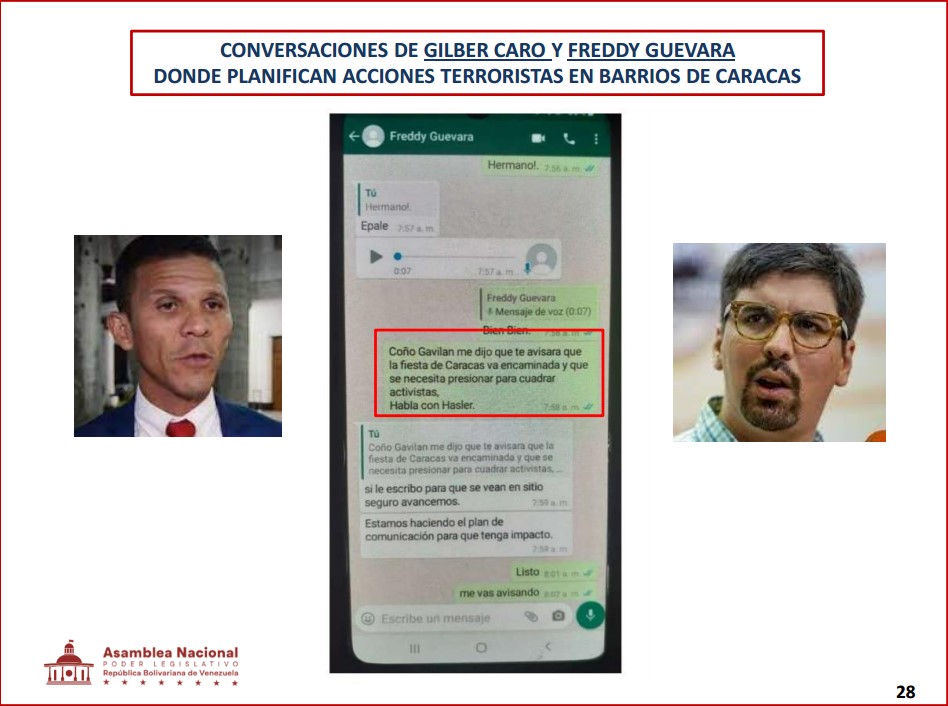 López instructs Iglesias to activate the youth of the party and “have them protesting during the Fiesta de Caracas.” 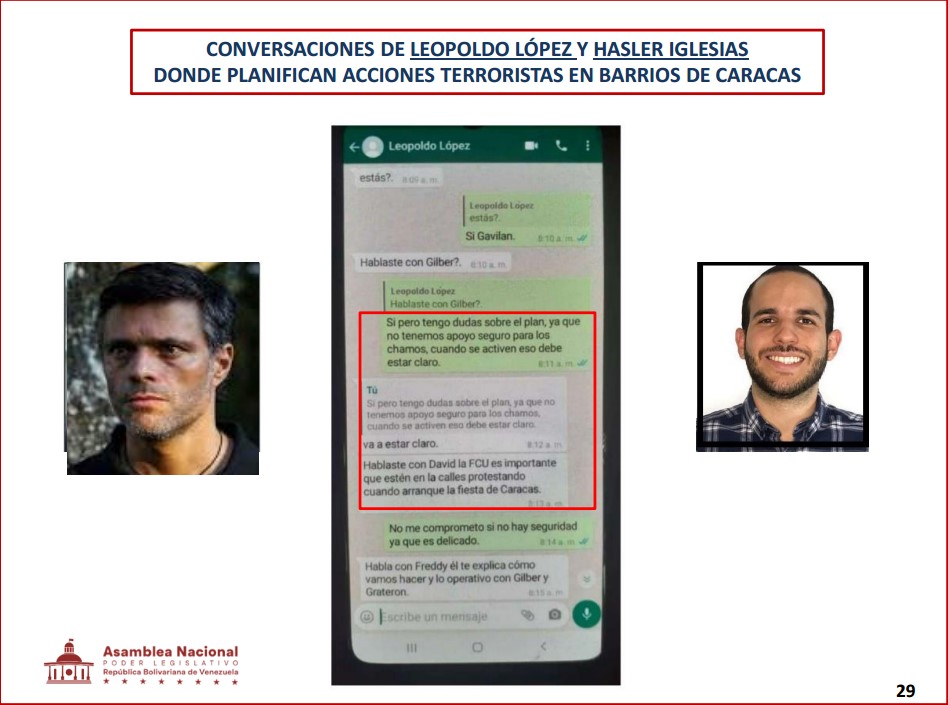 Likewise, López ordered “Gocho Javier” (wanted by the police forces) to coordinate “the activists” with Caro, to protest in La Vega, Santa Rosalía, and El Valle. 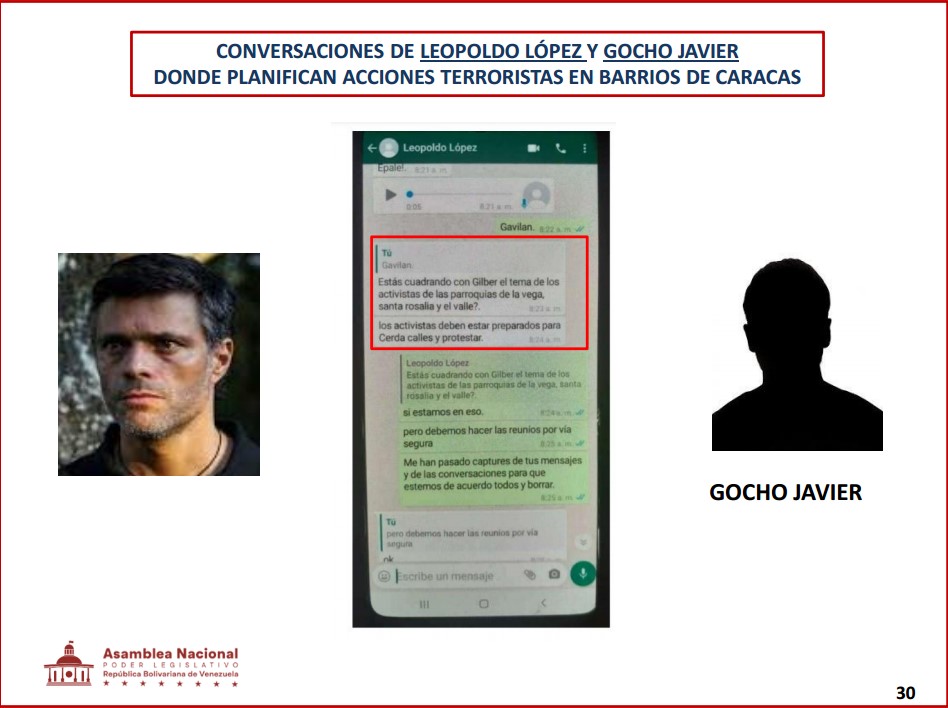 Graterón asks Somaza (Juan Guaidó’s fake chief of staff) for “the sweets” (dollars in cash) for the operation, and he replies: “I’m asking the president about the issue and I’ll let you know,” denoting that Guaidó was aware of the terrorist plot. 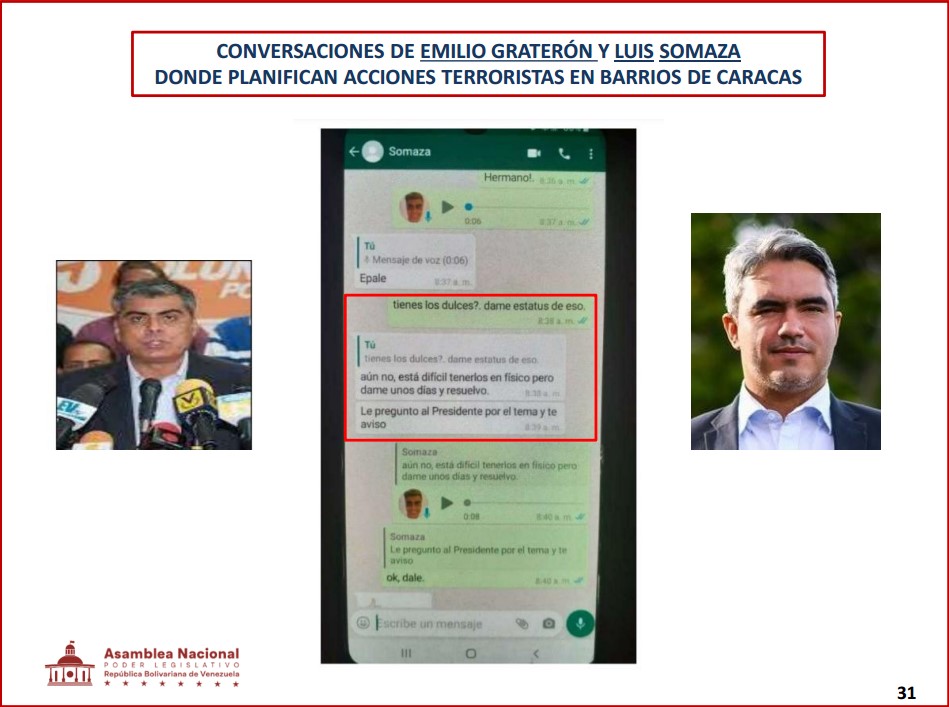 Graterón asks Caro if he had already “squared” the “communication part to accompany the Fiesta de Caracas” with Guevara. In this way, he reveals that VP has intimate connections with openly anti-Chavista media and that it is capable of carrying out a public relations campaign for its actions. Rodríguez noted that they have support from Efecto Cocuyo and Alberto News. 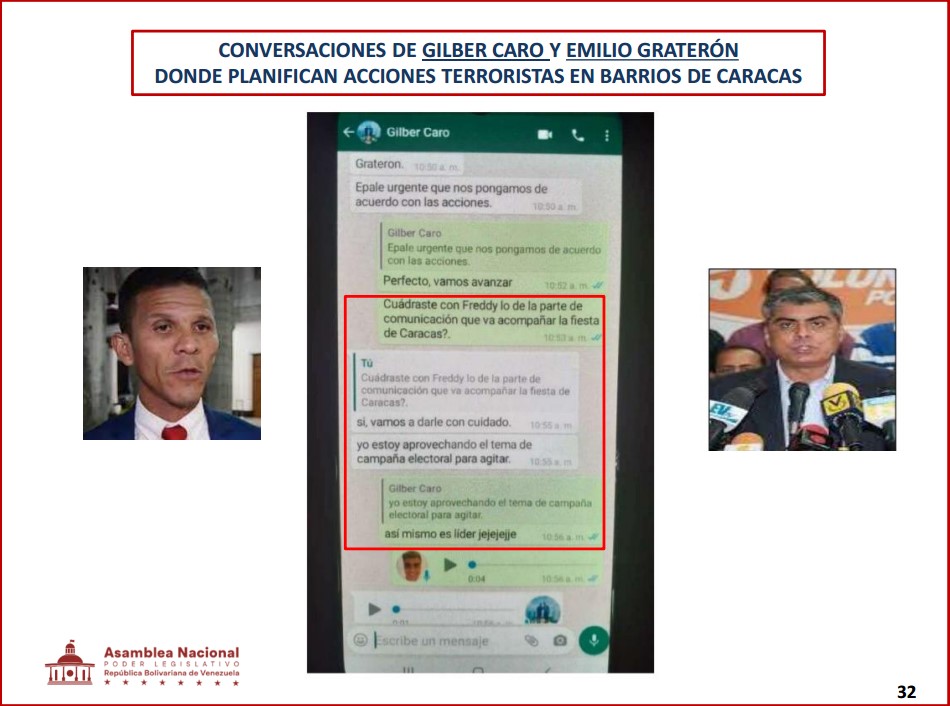 Iglesias tells Graterón that he is maintaining contact with the operators using the aliases “Gocho” and “Catire,” demonstrating links between the members of VP and paramilitary gangs in Caracas. 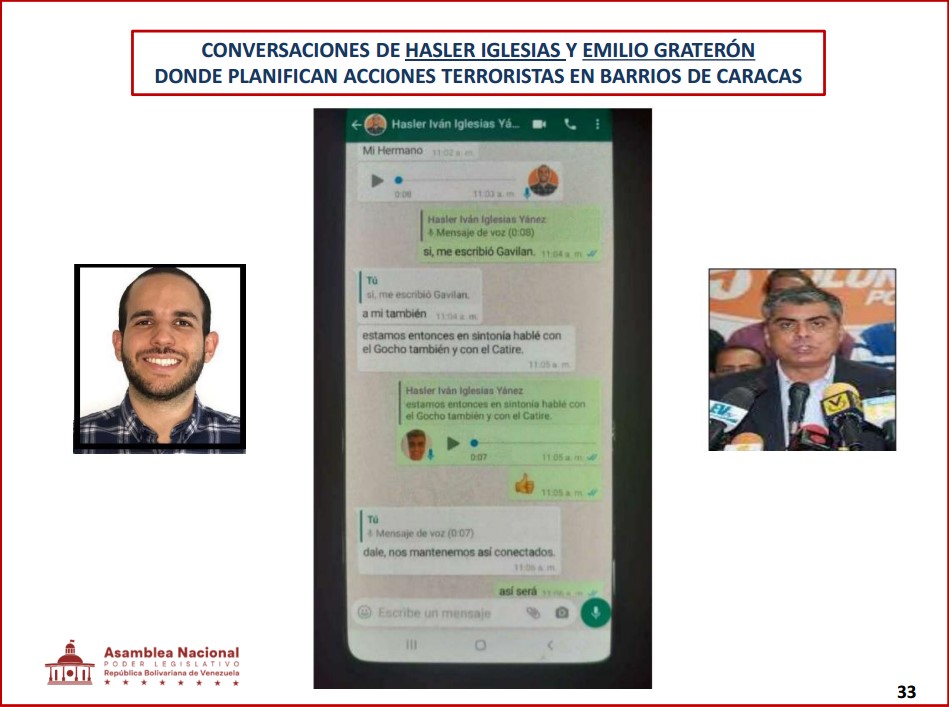 López orders Guevara to be in situ for the protests planned for the Fiesta of Caracas, to “achieve social unrest.” 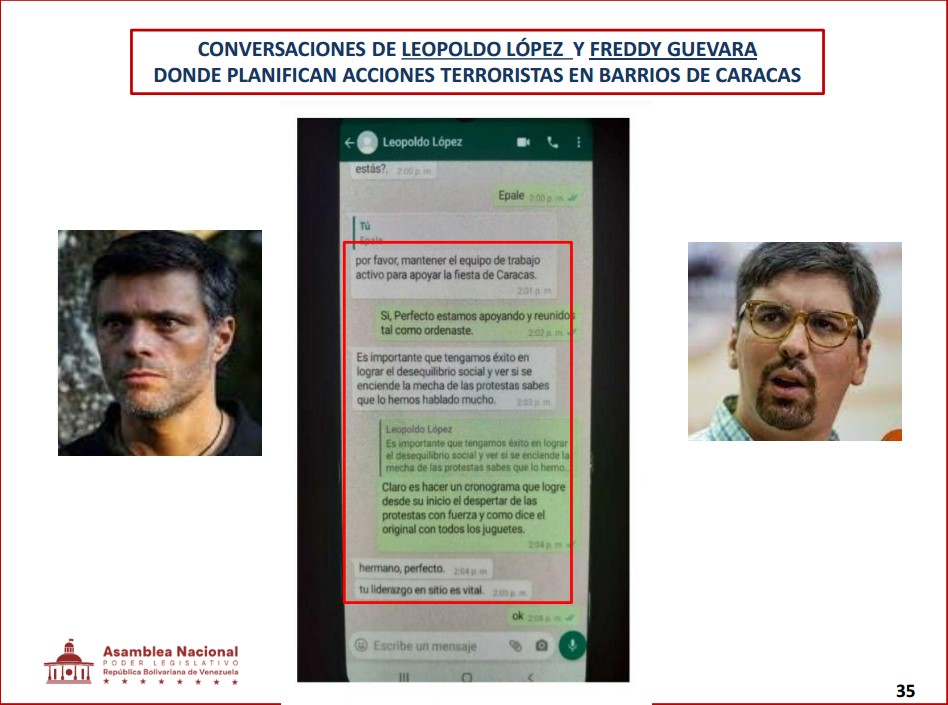 Graterón explains to Caro that they would wait for “[Yon] Goicoechea to pass the ‘sweets’ [money].” 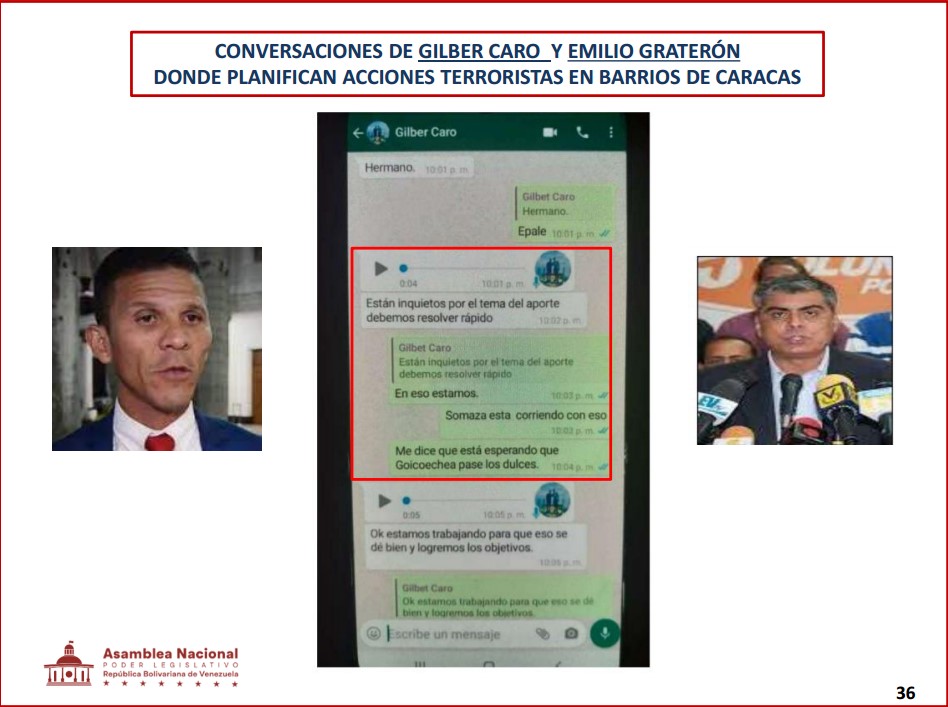 Finally, in conversation between Jimeno and Caro it is announced that “the thugs want tokens of faith,” meaning dollars. “Without that we will not advance,” writes Jimeno. 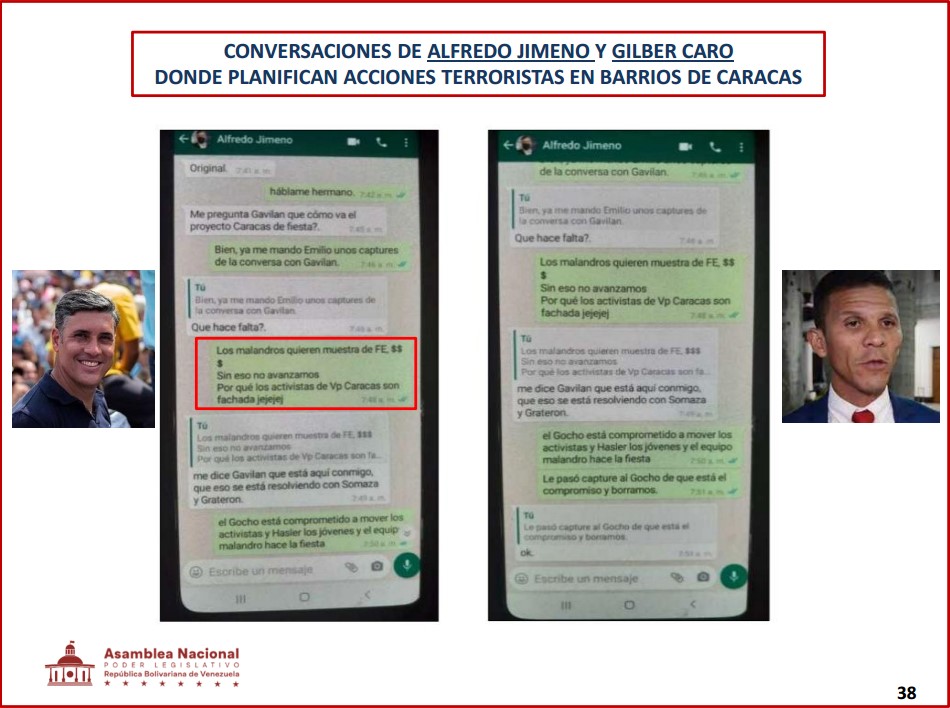 With this evidence, it can be concluded that VP distributes money “to groups of drug traffickers and paramilitaries so that they sow anxiety,” Rodríguez said.

As for the financiers, the Chavista deputy indicated that the money comes through NGOs and other fronts, through cryptocurrencies and dollars, and that more details will be announced soon in this regard.

The mass murders by the paramilitary gangs in working-class areas of Caracas in the days prior to Operation Gran Cacique Guaicaipuro, the urban warfare and logistics tactics to carry out shocking events including assassination, and the support of illegal economies (drug trafficking and other criminal enterprises) all reveal “a Colombian modus operandi.”

The “combination of all forms of struggle” in the narco-paramilitary tactics of anti-Chavista operators exposes their primary stratagem: using terrorism as the VP’s main bulwark to achieve regime change, as longed for and supported in Miami, Bogotá and Madrid, the international hubs in the hybrid war against Venezuela.

Featured image: The president of the Venezuelan Parliament, Jorge Rodríguez, presents evidence of the connection between Popular Will and armed groups from Cota 905, El Valle and La Vega (Photo: Leonardo Fernández Viloria/Reuters).