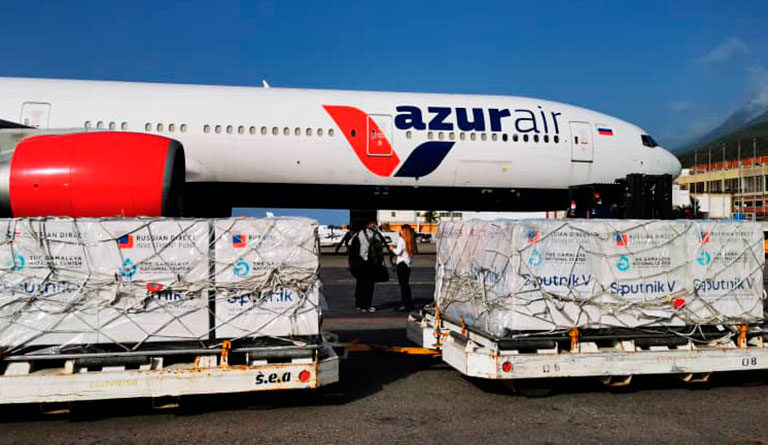 A batch of 500,000 doses of the Russian Sputnik V vaccine arrived this Saturday, June 12, at the Simón Bolívar International Airport in Maiquetía, Caracas, the capital of Venezuela.

This is the eighth shipment of the Russian COVID-19 vaccine to arrive in Venezuela from Russia. The batch was flown in by a flight of the Russian airline Azur Air, and was received at the airport by the Venezuelan Minister for Health, Carlos Alvarado, and the Russian Ambassador to Venezuela, Sergey Melik Bagdasarov.

Alvarado informed that with these new doses ”we already have enough vaccines in Venezuela today to vaccinate 13% of our goal, which is 22 million people.”

He said that through the mass vaccination program being carried out throughout the national territory ”we will reach 22 million people, which will mean vaccinating 70% of the population and thus creating herd immunity.”

He added that thanks to that friendship between Russia and Venezuela ”we are managing to circumvent the effects of unilateral coercive measures.”

He recognized the support that Russia has provided Venezuela, with vaccines, medical supplies, medicines and insulin. ”Our relationship is getting stronger,” he stressed.

Venezuela, he highlighted, has found it very difficult to access the financial resources blocked in international financial institutions by the United States and Europe, but through alliances with Russia, China and Cuba, and also through the COVAX mechanism of the World Health Organization (WHO) that agreed to provide doses for 20% of the Venezuelan population, the Bolivarian government has been able to continue the mass vaccination program. However, ”92% of those vaccines that are already paid for have not been delivered, and the last payment has been blocked,” stated Alvarado, in reference to the Swiss UBS bank putting freezing some payments for vaccines made by Venezuela.

”This is a clear example that unilateral coercive measures affect the entire Venezuelan people,” he emphasized.

Alvarado also informed that the possibility of using Sputnik Light in the country is being studied. ”Maybe very soon we will have more Russian vaccines in Venezuela again,” added the minister.

For his part, the Russian ambassador stated that the arrival of the new shipment of vaccines reinforces the solidarity of his country with Venezuela.

Featured image: A new batch of Sputnik V vaccine arrived in Venezuela from Russia this Saturday. Photo courtesy of the Venezuelan Ministry of Health.