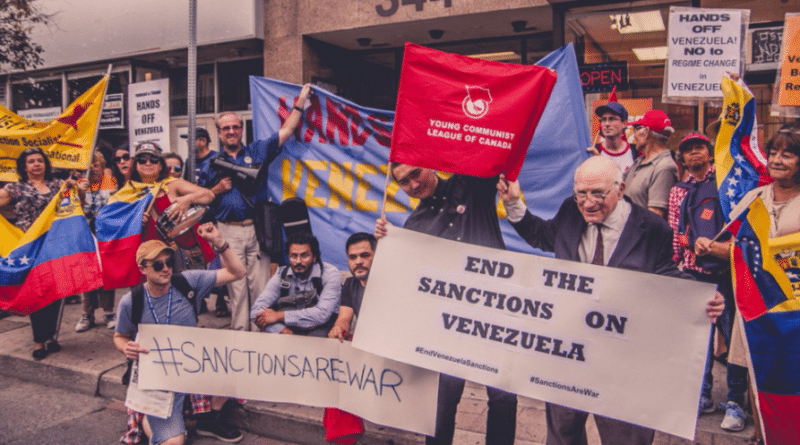 February 8, 2021.-  Washington, DC ― A new report from the US Government Accountability Office (GAO) finds that US economic sanctions on Venezuela are harming the Venezuelan economy, especially by depressing oil production and exports, and that they are also hindering US-backed humanitarian assistance to the country. The report, which looks at the impact of US sanctions on Venezuela’s economic crisis, was requested by former chair of the House Foreign Affairs Committee Eliot Engel (D-NY) and committee member Congressman Andy Levin (D-MI).

“This report from the GAO offers more evidence that these unilateral, illegal US sanctions are a form of collective punishment against the Venezuelan population and should be ended immediately,” Center for Economic and Policy Research (CEPR) Co-Director Mark Weisbrot said. “The sanctions have already killed tens of thousands of people in Venezuela.”

The report, which “review[s] information on the impact that U.S. sanctions have had on the Venezuelan crisis,” affirms the conclusions of a 2019 Center for Economic and Policy Researchreport by economists Jeffrey Sachs and Mark Weisbrot, which found that US sanctions were responsible for tens of thousands of deaths in Venezuela. The sanctions drastically reduced Venezuelan oil production, which in turn means fewer imports, including of food, medicines, medical equipment, and other health-related necessities. “U.S. sanctions have contributed to the revenue decline by making it more difficult for [Venezuelan state oil company] PdVSA to market its oil, according to a Congressional Research Service report,” the GAO notes.

“According to experts we interviewed and literature we reviewed, U.S. sanctions have had a negative impact on the already declining Venezuelan economy,” the GAO report says. It notes that electricity blackouts have increased “in frequency and duration” under the sanctions.

Citing the UN Office of the High Commissioner for Human Rights, Weisbrot noted that the collective punishment that is administered through sanctions is a crime under the Geneva Conventions. “As the UN has noted, civilians who are killed by sanctions ‘deserve the same protections provided by the Geneva Conventions to people in war.’ In other words, something that is a crime when it happens during a war is still a crime when it is perpetrated during peacetime. These sanctions are a very serious crime, as any number of human rights experts will affirm.”

Another 2019 report by Venezuelan economist Francisco Rodríguez, “Sanctions and the Venezuelan Economy: What the Data Say,” “estimate[s] that financial sanctions were associated with a decline in [oil] production of 797 tbd, which at today’s oil prices would represent USD 16.9 bn a year in foregone oil revenues.” By itself, this drop in foreign exchange revenue has enormous repercussions for the importation of humanitarian needs, as exemplified by the fact that from 2017 to 2018, total pharmaceutical imports collapsed by more than half.

The GAO also noted that the IMF revised its projections for how much the Venezuelan economy would contract in 2019, from 5 percent to 25 percent, due to the estimated impact of US sanctions. “An economic collapse of this magnitude, in a country that is already unable to import sufficient medicines, will result in many excess deaths,” Weisbrot noted.

“It is clear that in a country that cannot access the resources needed to purchase a sufficient quantity of medicines as well as public health infrastructure, a collapse of the economy of this magnitude is quite devastating,” Weisbrot said.

The GAO report also reveals that USAID implementing partners, tasked with providing humanitarian assistance, have been hindered by the sanctions: “All nine USAID implementing partners we spoke with reported instances of banks closing their accounts or delaying or rejecting transactions due to concerns over U.S. sanctions.” Humanitarian groups also struggle with challenges such as “gas shortages and electrical outages, supply chain and labor disruptions, security concerns, and the politicization of humanitarian aid” that the groups say may be made worse by US sanctions.

The GAO report also finds that the Office of Foreign Assets Control of the US Treasury Department has not been tracking inquiries related to the sanctions.

“The Trump administration, in its public statements, acknowledged that the purpose of sanctions in both Venezuela and Iran was to cause mass suffering that would lead people to rise up against their governments,” Weisbrot noted.

On March 11, 2019, Pompeo stated: “The circle is tightening. The humanitarian crisis is increasing by the hour. I talked with our senior person on the ground there in Venezuela last night … You can see the increasing pain and suffering that the Venezuelan people are suffering from.”

Human Rights Watch has called attention to a similar statement on sanctions strategy, from Pompeo, with regard to Iran: “Things are much worse for the Iranian people [with the US sanctions], and we are convinced that will lead the Iranian people to rise up and change the behavior of the regime.”

“President Biden has already ordered a review of economic sanctions to determine their humanitarian impact,” Weisbrot observed. “This is positive, but only if it leads to a lifting of the sanctions. The GAO report provides further confirmation that the sanctions on Venezuela are attacking the civilian population, and are worsening a humanitarian crisis. There is no reason to allow this crime from the Trump administration to continue.”