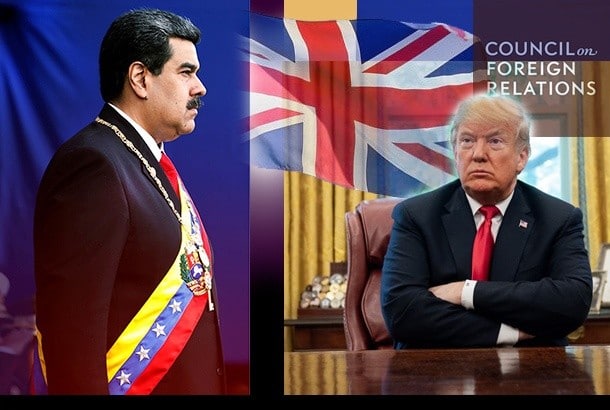 On 5th November Luis Almagro, Secretary of the Organisation of American States (OAS) spoke at a Canning House meeting in London.  Almagro made the purpose  of his visit clear: ‘We need more sanctions, not less’.  Almagro came to ask the UK for Global Magnitsky Act sanctions on Venezuelan leaders and his visit marks an escalating international plan featuring asset seizure, coercion and bribery of prominent people around President Maduro in an attempt to engineer regime change.

Almagro, whose OAS salary is heavily funded by the US, has been at the forefront of the efforts to oust Maduro from power and enable Juan Guaido, the self-proclaimed Interim President and leader of Venezuela’s defunct National Assembly, to carry out a coup d’etat in that country.

Questions regarding legality of sanctions and their use as acts of hybrid warfare were not raised, despite the meeting room being filled supposedly with intelligentsia and lawyers and advocates of human rights.  The only person to raise such questions was journalist Carolina Graterol who was then physically thrown out while the bored-looking Almagro stared into space.

Almagro’s visit to the UK calling for Magnitsky-style sanctions is clearly being coordinated with the recent ramping-up of sanctions aimed at high-ranking individuals in the Venezuelan government and its military forces by the Trump administration.  There are Magnitsky provisions in the UK’s 2018 Sanctions and Anti-Money Laundering Act or SAMLA, that provide a framework for waging economic warfare on individual foreign targets under a range of pretexts framed in human rights rhetoric, ostensibly  “Gross human rights violations”.

These have their roots in the US 2016 Global Magnitsky Act which followed the original 2012 Act.  This was built upon a web of allegations made by Bill Browder, that Sergei Magnitsky, a  “Russian lawyer” (in reality only an accountant) who worked for Browder in Moscow, was persecuted for ‘blowing the whistle’ on corrupt government officials, before dying as a result of state-sponsored abuse while in prison. This version of events has been challenged by numerous competent and qualified critics of Browder. As it turns out, Browder himself wanted for massive fraud in Russia, has also been linked to the UK Foreign Office information warfare program known as the Integrity Initiative.  Aside from being the absolute go-to pundit for all major corporate media outlets, he has been given access to the legislatures, including repeatedly being given a platform in the House of Commons to frame British policy towards Russia.

Magnitsky sanctions will be used when the UK exits the European Union. The current government has committed to passing a Magnitsky Act.  Sanctions may very well be used to target Russians, and also individuals in the Venezuelan government and military, as suggested during Almagro’s visit.  In doing this, the UK may be aligning with Washington in the use of sanctions.  This would not be surprising, as while inside the EU, the UK has been by far the most aggressive driver of sanctions, according to Tom Keatinge of the Royal United Services Institute (RUSI):

“Within the EU, it is typically the UK that has been a robust advocate for the use of sanctions (for example against Russian aggression in Ukraine).

Allies of the US, more specifically the members of the Lima Group, a coalition of Latin American right-wing governments set up to promote regime change in Venezuela, recently passed legislation providing them with the framework by which to target individuals with sanctions. This took the form of Resolution RC.30/RES. 1/19 of  the Inter-American Treaty of Reciprocal Assistance, also known as the Rio Treaty or “TIAR,” passed in September.  Venezuela had withdrawn from the treaty in 2013, but Guaidó, approved reincorporating it in July, a decision that was declared unconstitutional by the Venezuelan Supreme Court soon after. Despite this, the treaty was formally invoked by representatives of 16 member countries: principally by the US and its Lima Group allies.

The timing of the resolution is also of significance.  It was passed three months after the Council on Foreign Relations (CFR), the Washington policy-making establishment that engineered illegal and unilateral sanctions, and coordinated escalation of the migration crisis using NGOs, set out its latest contingency plan for Venezuela. This included the recommendation:

This suggests that invoking the treaty and passing a resolution was the quickest way of ‘developing domestic legal framework’.  The plan is heavily focused on increasing and expanding sanctions and emphasises their use for the coercion and “incentives” which could be construed as bribery, of individuals:

“Complement the sanctions regime with clear incentives (e.g., lifting individual sanctions, immunity, and opportunity to participate in politics) to members of the regime to accept a peaceful political transition.”

The ultimate goal is to apply enough pressure and ‘incentives’ to create and exploit cracks in order to weaken Maduro and stage a successful “transition” or regime change:

“Continue pursuing overt and back-channel negotiations with regime and armed-forces elements willing to support a peaceful transition.”

This means effectively that US allies now have a further coordinated mechanism with which to target individuals of the Venezuelan government.  It also indicates that the attempt to divide those at the head of the Venezuelan military and government through both coercion and ‘incentives’ by the use of targeted sanctions is being aggressively escalated.

Targeted sanctions as acts of aggression

It should be pointed out that during the recent House of Commons inquiry on sanctions, British sanctions lawyers explained it is not unusual for those seeking to implement sanctions to search online for anything that might stick, be it hyperbole, spurious accusations, or by plucking information from something as subjective as a news article – in order to justify these punitive measures.  Certainly, it is possible that any such ‘evidence’ of crimes by members of the Maduro government may come either from one of the many propaganda articles published by Western mainstream media, or from reports written by organisations like the OAS, or even reports compiled by western NGOs.  With little or no evidence needed to justify targeted sanctions, they become extremely arbitrary, and there appears to be very little oversight or accountability over them.  In some cases, nothing more than a smear is needed to justify a devastating raft of sanction by an aggressive state.  Neither should individually targeted sanctions be under-estimated, as they are designed to have wide effect and impact populations.  Those targeted are often able to cope somehow through funds – as many are well paid or have access to resources because of their positions, while those around them are severely impacted.

The Rio Treaty and the threat of force

Following the invocation of the Inter-American Treaty of Reciprocal Assistance (TIAR/Rio Treaty), the Venezuelan ambassador to the UN wrote to the UN Security Council, warning that the treaty, never activated (since its signing in 1947),  is being used to enable a more aggressive intervention.  This is because the treaty stipulates a ‘common defence’ principle.

The idea of US military intervention, pushed by Guaido, is widely viewed as unlikely for fear of implicating Trump in a foreign war, something he pledged not to do.  However, the CFR suggests various scenarios that could justify the presence of a ‘international stabilisation force’ as part of an US contingency plan.  This strategy has been applied in the past by Washington with varying degrees of success both in Iraq, Syria, and also with Iran.  If punished enough with sanctions Venezuela might become a failed state, or alternatively, it could be accused of crimes against Colombia, a worry identified by the Venezuelan ambassador here:

“The Government of the United States of America is being supported in its military interventionism by the Government of Colombia which intends to militarize its relations with Venezuela by trying to involve our country in its longstanding internal war whose causes are purely endogenous.”

Such scenarios would avoid unpopular direct US military intervention, but open the gate sufficiently enough to allow for the arrival of external forces legitimized by the TIAR treaty.

An important point here is that, whatever the likelihood of any such scenario, the invocation of the treaty, along with the  CFR contingency plans, show attempts to shift rhetoric towards the idea of physical involvement in Venezuela by the US and its allies.

Venezuela’s neighbor Colombia is currently host to nine U.S. military bases, and would likely provide a beachhead to any international deployment to the region.

There is every reason to believe that if the Conservatives win the upcoming UK general election on 12th December, British foreign policy towards Venezuela will remain colonial and aggressive, focused on regime change, and take the form of a further alliance with the US through escalated economic warfare.

Do you recognise the right of self-determination @AlanDuncanMP?

I don’t know what they say in the Gentlemen’s clubs of London, but my constituents are sick of Britain meddling overseas.

They want a war on poverty at home – not poor people abroad. pic.twitter.com/ETWo2wqr13

Chris Williamson, one of a handful of Labour MPs who has consistently opposed US regime change attempts in Venezuela.

If the Labour Party win the UK election, it is unclear whether there will be a significant difference, despite Jeremy Corbyn’s vocal opposition to foreign intervention.  There has been no party policy opposition to the punitive sanctions, including those imposed by the UK as part of the EU-wide sanctions which the government pledged to continue post Brexit.  There has been no opposition to the illegal attempts to overthrow the elected Venezuelan government, or of the clear and undisputable interference of the Trump government – all of which are called into question under the UN charter and international law.  As the opposition party, Labour has remained silent on Venezuela, with the exception of a handful of MPs who have then found themselves alienated and smeared by their own party elite.  Others have even been behind regime change policy. Still others, such as Shadow Foreign Secretary Emily Thornberry, have used rhetoric strategically, by rejecting the idea of US military invasion while supporting the idea of pressure on the Venezuelan government.  This could very well mean the use of Magnitsky sanctions, even eventual support for external military forces arriving in or near Venezuela under the seemingly noble pretext of ‘saving the day.’

It’s certainly worth noting how the bipartisan nature of Thornberry’s foreign policy was exposed by her recent comments about ‘Russian interference in British democracy,’ which clearly echoes the underlying neocon policy which buttresses Magnitsky sanctions, again, a bipartisan foreign policy position.  If Labour Party leaders like Thornberry need guidance on an ethical foreign policy on Venezuela and the use of sanctions, they can listen to the words of former UN rapporteur Alfred De Zayas:

The future of Venezuela is a matter for Venezuelans. @Jeremy_Hunt's call for more sanctions on Venezuela is wrong. We oppose outside interference in Venezuela, whether from the US or anywhere else.

There needs to be dialogue and a negotiated settlement to overcome the crisis.

In the event of a Brexit, will the UK will continue with the sanctions its committed to through the EU, or will they simply add more sanctions, thus coalescing with a more hawkish US policy, as former Foreign Secretary Jeremy Hunt attempted to do last January?

The irony here is if the UK ends up leaving the EU on the grounds of wanting independence from Brussels, it will end up adhering to Washington’s policy dictates. 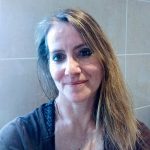 Nina Cross is an independent writer and researcher, and contributor to 21WIRE.

Nina Cross is an independent writer and researcher, and contributor to 21WIRE.