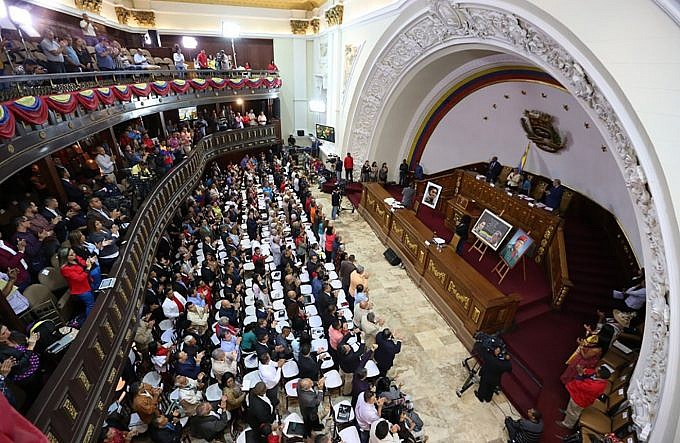 The Venezuelan National Constituent Assembly (ANC) will approve this Thursday, October 8, the controversial law questioned from within by allies of Chavismo.

Despite the criticism that has emerged from within the allies of Chavismo, among them the Communist Party of Venezuela (PCV), as well as from the opposition, the Venezuelan Government and the Constituent Assembly seem to have put on “cruise speed” the bill that is estimated to be approved in the session this Thursday, October 8 at the ANC.

“The plenary session of the ANC is scheduled to debate and, with the help of god, approve this bill that tomorrow (Thursday 8-O) will be converted into constitutional law,” said the PSUV constituent Francisco Torrealba.

In an interview with Ginette González and Andrés Rojas, on Unión Radio, he was consulted about the opinions of the general secretary of the PCV, Óscar Figuera, the lawyer and historian Luis Britto García, and the former Minister of Education, Héctor Navarro, who consider that this new norm would be violating aspects of the Constitution.

“Those who make these statements seem to have deliberately ignored what the text and the draft say in relation to maintaining compliance with all constitutional principles,” he said.

The United States has maintained a de facto embargo on Venezuelan crude since April 2019, in addition to a long rang of illegal sanctions. The bulk of these measures came into force after the 2018 elections that gave Maduro a second term, but were branded as fraudulent by Washington without presenting any solid argument about fraud.

With this law, the Government hopes to advance new modalities that circumvent all mechanisms of persecution and international blockade, aiming at recovering the Venezuelan economy strongly affected by US sanctions and an undeclared unconventional war.

The general secretary of the PCV, Óscar Figuera, recently warned about the law and said that “we must show the country with all responsibility that the anti-blockade law, far from representing an action to protect the interests of the Homeland (…) constitutes a serious setback that will deepen the economic vulnerabilities of the country in the face of its external aggressors, at the same time that it shifts even more the weight of the crisis and the sanctions on the shoulders of the workers and the people in general.”

Torrealba, for his part, referring to the effects of the law on PDVSA, stressed that “it is not proposed that the constitutional guarantees that establish the property of the Venezuelan State over the resources that are under the subsoil, will be left without effect.”

He insisted that the fundamental commitment is to raise production to its highest level and “become the most efficient producers and generators of goods and services.”

In any case, beyond the criticism, for the Government the approval of the law is a fact and a matter of hours in the plenary session of the National Assembly that is controlled by Chavismo.