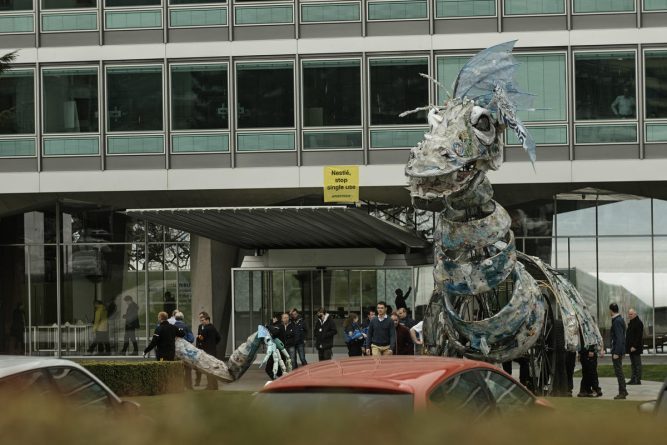 16/Abr/2019.- Greenpeace Switzerland activists today delivered a 20 meters long “plastic monster” partly covered with Nestlé branded plastic packaging to the company’s headquarters in Vevey, calling on the corporation to end its reliance on single-use plastic. Activists also held protests at Nestlé offices in the Philippines, Germany, Kenya, Slovenia, and its sub-brand San Pellegrino in Italy as part of a global day of action led by Greenpeace and allies from the Break Free From Plastic movement.

In response to the day of action against Nestlé, Global Plastics Project Leader Graham Forbes said:

“Last year, Nestlé produced a shocking 1.7 million tonnes of plastic packaging – over 300 garbage trucks worth a day – a 13% increase from the year before. It is totally irresponsible that Nestlé produces hundreds of billions of plastic items every year that are used for a few seconds and then left to contaminate our communities, food chains and ecosystems for generations.

“People around the world are taking action today to demand Nestlé show true leadership and confront the throwaway culture that underpins its current business model. Leadership does not mean substituting plastic with another single-use material like paper or bioplastic, which will shift the destructive impacts of the throwaway culture to the world’s forests and agricultural lands. For the sake of our planet and human health, we need Nestlé to immediately reduce its production of single-use packaging and invest in delivery systems based on refill and reuse.”

From Manila to Rotterdam, and along the Rhine with a “plastic monster” to Nestlé’s headquarters in Switzerland, Greenpeace has been raising awareness about the plastic production crisis in towns and villages across the globe. Greenpeace is demanding that fast-moving consumer goods companies (FMCGs) like Nestlé, Unilever, Coca-Cola, PepsiCo, Danone, Johnson & Johnson and Mars be transparent and active in their immediate reduction in the production of plastic packaging while investing in the alternative delivery system of refill and reuse. To date, over 3 million people from around the world have signed a petition calling on brands to take action.

[1] Nestlé was found to be one of the top producer of branded plastic pollution in waste audits done in the Philippines conducted by the Global Alliance for Incinerator Alternatives (GAIA).

[2] Nestlé was one of the top corporate plastic polluters identified in a worldwide cleanup and brand audit effort conducted by the Break Free From Plastic movement last year.

[3] Eleven Fast-moving consumer goods companies (FMCGs) were found to be the main corporations behind the plastics pollution pandemic in a report released by Greenpeace International last year.