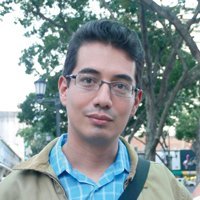 He is passionate about computer science since he was about 14 years old, at that age “a man gave me a small computer that he had bought in the eighties, of those that were connected to a television and had to be programmed to work (a Sinclair ZX81 ), and I really liked it.” On his political inclination, his parents were a great influence. “They were people of very humble origins, both emigrants, dissatisfied with injustice and inequality. But they were not militants of the left. I had many other influences, classmates in HS whose parents were on the left, as well as several teachers who were trained in the Pedagogical and gave us classes at a time as conflictive as it was the presidency of CAP and the military insurrection of Chávez ” He enrolled in the UCV and in 2006 he graduated in Computing, a career that he complements with popular communication in the digital field.