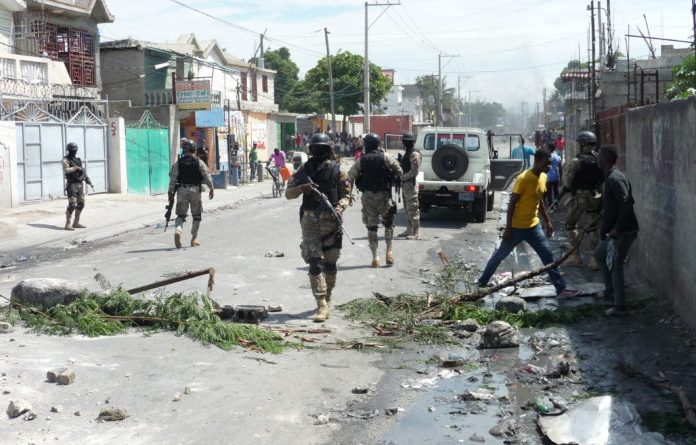 Port-au-Prince looks post-apocalyptic, reflecting the fierce class ar which has raged here since last summer, if not since 1986.

The dusty or muddy pot-holed streets are covered everywhere with rocks, bricks, sludgy deposits of plastic and organic garbage, and the charred steel-spaghetti remains of burned tires from barricades. Here is the fly-blown corpse of a pig or dog. There is a giant limb or an entire tree, hacked down by machetes, blocking the road. On this street is a battered former tap-tap, perfectly balanced on its side, which walls off a thoroughfare. On that, it is a makeshift barrier of smashed refrigerators, metal signs, barbed wire, cinder-blocks, and plastic chairs.

Small mountains of rubbish have grown every few blocks, picked over by bending paupers, young and old. Trucks with two headlights and a grill are as rare as a wall without graffiti. An odor of burning rubber, sewage, and tear-gas permeates the city. Most businesses are tightly shuttered with wood or steel.

This is the Haiti against which Haitians are rebelling on Sep. 30, 2019, 28 years after the bloody 1991 U.S.-backed military coup d’état against Haiti’s first democratically elected president Jean-Bertrand Aristide. That putsch was the single most crucial event – more pivotal than the 2010 earthquake – to accelerate Haiti’s descent into the turmoil it struggles with today.

On this coup anniversary, Haiti’s masses have launched “Operation Find Jovenel.” Haitian President Jovenel Moïse has been hiding for the past few weeks. The masses have long monitored his movements between his personal home in the hills of Pèlerin 5 above the capital to the Presidential Palace on the central square, the Champ de Mars. People on one end of the route would alert those on the other, who would then throw rocks, bottles, and curses at the motorcade of shiny black vehicles speeding the president, with sirens wailing, up or down the hill. But the motorcades have stopped. Nobody seems to know where Jovenel is.

On Wed., Sep. 25, he made a pre-recorded televised address to the nation that was broadcast at about 2 a.m.. He appealed for calm and national dialogue but reiterated that he would not step down, as the masses have been demanding since Jul. 6-8, 2018, when the first spasm of the latest uprising took place in response to International Monetary Fund-dictated fuel price hikes. The government had to back down, and Jovenel’s first prime minister, Jack Guy Lafontant, reluctantly resigned.

The second PM, Jean Henry Céant, only added fuel to the fire. The protests grew in size and fury, culminating in an 11-day paralysis of the country from Feb. 7-17, 2019, known as “Ayiti Lòk” – “Haiti is locked down.”

Jovenel wanted to again sacrifice his PM, but the ambitious Céant maneuvered to have the President resign, as the people demanded, so he could take his place.

Jovenel won that battle, having his allies in the Chamber of Deputies oust Céant in March 2019. But since then, Jovenel has not succeeded in having Parliament ratify either of his latest PM nominees: Jean-Michel Lapin or, currently, Fritz-William Michel.

The result is that Haiti is essentially without a government, helping to deepen the masses’ misery. Add to that a gas shortage resulting from the government’s inability to pay its fuel suppliers. This makes Haiti’s principal occupation – motorcycle taxis – ever more difficult. Gas stations are buttoned up, with giant steel boxes encasing the pumps. Along the roadside, black-market vendors sell fuel from clear plastic jugs for 500 gourdes (US$5.22) per gallon. The gas has been smuggled across from the neighboring Dominican Republic or siphoned out of the shuttered gas stations’ tanks. Sometimes the fuel includes colored water, many say.

When a station does open up, it immediately becomes the center of a giant traffic jam, with moto-taxis, tap-taps, deluxe SUVs with tinted windows, dented jalopies, and black-market hawkers carrying 12-gallon yellow plastic containers all jockeying for position in a chaotic, confrontational scramble to the pump before the supply runs out.

Jovenel is not the only official the population is hunting. Radio Zenith, the principal media guiding and urging on the mobilization, regularly reads out a much longer list which includes Jovenel’s predecessor, mentor, and founder of their Haitian Bald-Headed Party (PHTK) Michel Martelly, his wife Sofia Martelly, their son Olivier Martelly, Martelly’s prime minister Laurent Lamothe, most of Jovenel’s ministers, many pro-PHTK parliamentarians, repressive police commanders, and a few of the regime’s bourgeois backers.

Based on the capital’s northern fringe in Bon Repos and well-guarded by multiple barricades and scruffy irregulars, Radio Zenith also provides logistical support to the demonstrators, telling them where an ambulance needs to pick up a woman giving birth or a man who has bloodied his head in an accident. It asks the barricade-guardians to let the ambulance through and also warns them when a vehicle with masked pro-regime paramilitaries and no license plates is circulating in a certain area. It then cuts to a rousing patriotic song by well-known protest singer Farah Juste. “Stay vigilant!” shouts the announcer between stanzas. “Stay strong!”

Such radio motivation and marshaling was pioneered by the Catholic Church’s Radio Soleil 33 years ago during the uprising against President-for-Life Jean-Claude “Baby Doc” Duvalier. On Feb. 7, 1986, he was flown out of Haiti on a U.S. government C-130 with his sports cars.

His departure began a chapter of Haitian history that might be titled: “A neo-colony’s masses struggle for democracy and sovereignty against the bloody counter-revolution by Haiti’s foreign and local ruling classes.”

Each electoral victory of the masses (1990, 2000) has been met by a coup d’état and foreign military occupation (1991, 2004), until finally the empire changed tactics by fraudulently engineering the election of Martelly (2011) and Jovenel (2016). Their regimes returned Haiti to a cozy relationship with Washington.

Furthermore, they subverted Venezuelan solidarity. Out of three presidential administrations, Martelly plundered three-quarters of the PetroCaribe Fund, a $2 billion development capital account fed by Venezuelan fuel sales, while by March 2018 Jovenel had sunk the PetroCaribe agreement for cheap gas which Haiti had established with Venezuela in 2008.

An exhaustive audit of the PetroCaribe fund has also found that Haiti’s current president “embezzled” millions of dollars from PetroCaribe projects.

The Haitian people’s outrage over the PHTK’s PetroCaribe malfeasance and corruption is the principal driver of the massive demonstrations against, and now the manhunt for, Jovenel Moïse.