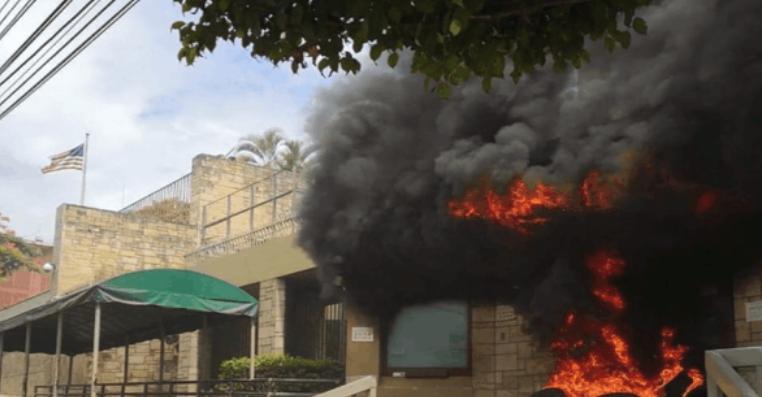 After midday, a group of demonstrators from the associations of teachers and doctors in Honduras arrived at the entrance of the building of the United States Embassy in Tegucigalpa, the Honduran capital, this occurred without any injuries or detainees informed at the moment.

The incident occurred during the second day of protest lead by teachers and health professionals who are in opposition to the health and education reforms proposed by the government of Juan Orlando Hernandez, with the intention of privatizing these important mass access services.

In parallel, protests in other areas of the Honduran capital ended up in clashes between security forces and hundreds of protesters, a group of them blocked the traffic near a shopping center, throwing stones at the policemen who repressed with tear gas, some merchants had to close their businesses. One of the teachers told the EFE news agency “We are on a definite strike, until the government retracts the PCM (decrees), we sit down to talk and we go back to our classrooms.”

The demonstrations were also joined by high-school and college students, as well as activists from various opposition parties.

The announcement of the decrees was made on Wednesday night by the president of Honduras Juan Orlando Hernández.