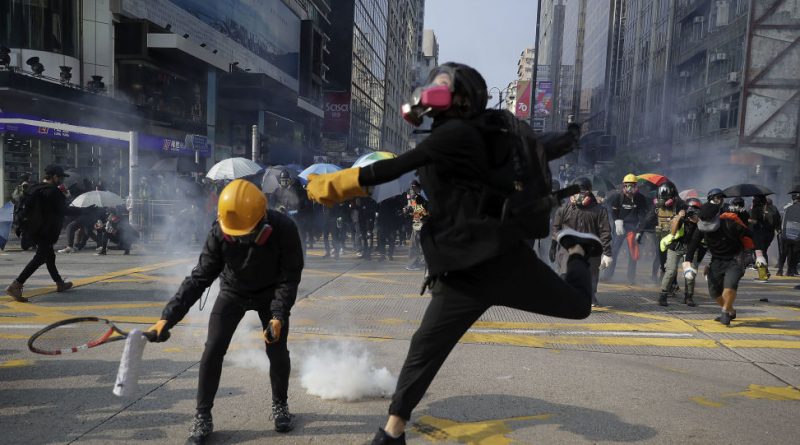 Radical protesters in Hong Kong have ransacked the office of the Chinese state-run news agency Xinhua, ramping up their months-long campaign of violent disobedience against Beijing.
The office in Hong Kong’s Wan Chai district was attacked amid the latest demonstration against the central Chinese government. Images from the scene showed smashed windows in the lobby, a graffiti-sprayed interior and a small fire which was quickly doused.

It is believed to be the first time that the office of the agency was targeted by the radicals since the mass protests started in June over a now-scrapped extradition bill. The news outlet later condemned the vandalizing of its premises, and published a video showing the damage that was done.

The vandals usually attack businesses that they see as tied with Beijing, as well as Hong Kong’s public rail transport system. The campaign has already disrupted business in the autonomous Chinese city, plunging it into a recession.

The protests, which marked the 22nd straight weekend of unrest, were again marred by clashes between the masked demonstrators and police, who eventually used tear gas and water cannons to disperse the crowds.

Unrest in Hong Kong, a former British colony, started over a now dropped bill, which would have made it easier to extradite prisoners to mainland China. Demonstrators claimed it was created to allow Beijing get its political opponents and said it did not respect the city’s self-governance rights under the so-called ‘one country, two systems’ arrangement. The latter was negotiated prior to the handover under Chinese sovereignty in 1997.

The demonstrators also believe outside powers can put pressure on Beijing. British and American national flags, patriotic songs and even banners showcasing US President Donald Trump riding a tank have been regularly featured at their rallies.