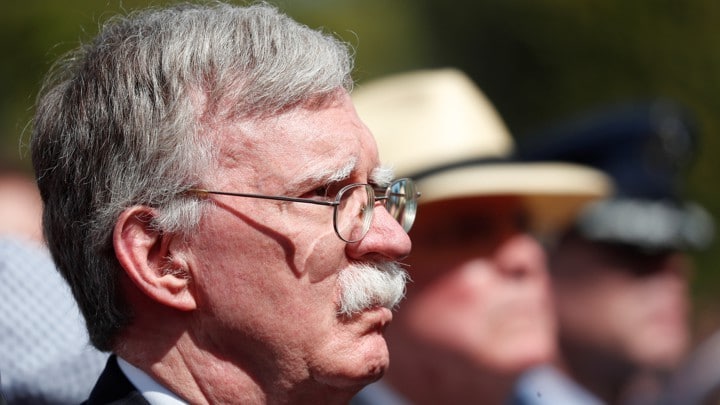 The national security adviser was conspicuously absent from North Korea during the historic concession to Kim Jong Un.

This weekend, at the invitation of Kim Jong Un, President Donald Trump stepped briefly across the demilitarized zone into North Korean territory, becoming the first sitting United States president to do so. That’s one short waddle for a U.S. president, one giant leap for a supreme leader of the Democratic People’s Republic of Korea. Previous presidents had refused to even contemplate such a gesture, which the North Koreans and the rest of the world will read as acknowledgment that its regime acted wisely when it decided to build atomic bombs and test long-range missiles, while impoverishing its people and threatening U.S. allies with annihilation. Arms-proliferation experts have united in considering such a visit disastrous—a signal to potential proliferators everywhere that they should spin up their centrifuges and fuel up their rockets if they want to live.

During the past two decades, no one has discouraged friendly engagement with North Korea more forcefully than National Security Adviser John Bolton, who was conspicuously absent from Korea during the historic concession to Kim Jong Un. Just hours after the DMZ crossing, Bolton tweeted out a photograph of himself 1,200 miles away in Ulaanbaatar, the capital of Mongolia. Accompanying Trump in lieu of Bolton was the Fox News host Tucker Carlson, who recently called Bolton a “tapeworm” infesting Trump’s administration. Bolton’s fellow tapeworm and top Korea adviser, Matthew Pottinger, accompanied him in Mongolia.

A key to Bolton’s bureaucratic success, more than one of his colleagues told me, is his willingness to cede responsibility for policies doomed to failure. Clearly he believes the administration’s Korea policy falls into that category. Under Secretary of State Mike Pompeo, the administration has tried to meet North Korea for bilateral talks and lure it into giving up nuclear weapons in exchange for money and security guarantees. As undersecretary for arms control under George W. Bush, Bolton discouraged exactly this sort of concession; he delighted in cataloging the ways that North Korea failed to meet its obligations, and demonstrated that it craved nuclear capability and pursued it incorrigibly, like an addict. As national security adviser, Bolton has stayed mostly silent, other than to repeat the administration’s desire for a denuclearized Korea. He just leaves out the part where he used to say that a denuclearized Korea could never happen without the implosion of the government that rules it.

Bolton has done this before. During the Bush administration, Bolton advocated a military strike against Iraq, even venturing in an interview with the BBC that American involvement in Iraq after the invasion should be “limited.” What he meant, a senior colleague told me, was that we should “kick their asses and get out.” (I granted anonymity in exchange for candor.) Saddam Hussein was an arms proliferator, and he should be deposed and killed, to discourage other proliferators—Kim Jong Un’s father, Kim Jong Il, among them. When it came time to discuss the invasion’s aftermath, Bolton told me, “the nicest thing [Colin] Powell and [Condoleezza] Rice ever did for me was to cut me out of Iraq planning.” He stepped back, and having owned the invasion, can plausibly claim to have no responsibility for the criminally botched occupation that ensued.

Bolton is looking ahead—and not even that far ahead. Kim Jong Un has, in the past few years alone, assassinated his own brother, a CIA asset, in Malaysia. He delivered an American citizen, Otto Warmbier, back to the United States with his brain scrambled. He has flatly refused to denuclearize, even when presented with lavish incentives to do so by Trump, in person. When this pattern of misbehavior continues, the president caught grinning with Kim Jong Un will look like a naïf.

And then there is the issue of Trump’s shadow national security adviser, Tucker Carlson, who serves unofficially while hosting his nightly show. Carlson’s hatred of Bolton is sincere and mutual: Watch the clip of Bolton sarcastically complimenting Carlson’s “long experience in foreign policy”; “Better record than yours,” Carlson replies. (Carlson, who supported the Iraq War and occupation, says he feels burned by the neoconservatives who persuaded him to do so.) Carlson has inserted himself into the frame of this bizarre and impromptu diplomatic trip, and that is exactly where the Boltonites want him: forever associated with a handshake that will be recorded as a new low in the annals of presidential gullibility.

To have both the Tapeworm and Fox News’s bow-tied anthelmintic in the same entourage would have been too much. One of them had to go, and the one who went, went as far away in the region as he could. What remains is a question of dignity. For how long will Bolton remain in Trump’s service, when Trump ignores his counsel and fraternizes with a talk-show host who ridicules him? I predict that Bolton will stay in office long enough to watch Trump make a few more errors, on the advice of someone else. Then the tapeworm will emerge.

Graeme Wood is a staff writer for The Atlantic and the author of The Way of the Strangers: Encounters With the Islamic State.

Graeme Wood is a staff writer for The Atlantic and the author of The Way of the Strangers: Encounters With the Islamic State.