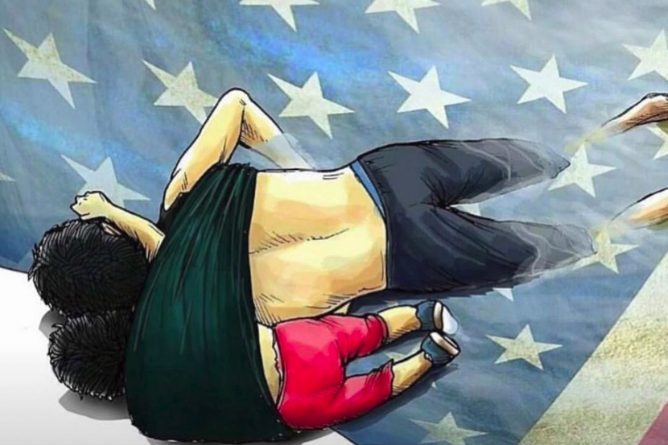 The photograph taken on the Rio Grande, on the border between Mexico and the United States, unleashed a wave of reactions in social networks.

A Salvadoran migrant and his daughter, one year and 11 months old , drowned after being dragged along the Rio Grande when they tried to cross into the US from Mexico. The scene, captured on Monday by journalist Julia Le Duc, was published by the Mexican newspaper La Jornada.

The photograph of the father, named Óscar Alberto Martínez Ramírez, and of the baby, Valeria, embraced while they are face down in the water, triggered a wave of indignation at the tragedy of the migratory phenomenon.

The story occurred on June 23, when a family of migrants from El Salvador tried to cross the border river that separates the Mexican city of Matamoros (Tamaulipas) and the US city of Brownsville (Texas).

Tania Vannesa Ávalos, Óscar’s wife and mother of the baby, told how her husband crossed the river with Valeria and, after leaving her on the shore, wanted to return for the woman. However, in an instant he realized that the little girl, seeing him go away, threw herself into the water. The father launched after her and managed to hold her, but both were dragged by a strong current and drowned in the Rio Grande. Tania had to witness the moment when her husband and daughter disappeared into the water.

Their bodies were found 12 hours later, on Monday, June 24, one kilometer from the International Bridge that connects Matamoros with Brownsville, where they tried to swim across.

The bodies of the father and the girl were held by the black shirt that Oscar wore, who was found with right arm of the baby around his neck.

The family had been waiting two months to apply for asylum to the US, while they stayed at the Puerta México camp on the Mexican side, with temperatures of up to 45 degrees Celsius. Tired of waiting and full of despair, they decided to cross the Rio Grande.

Embraced “in their last breath”
The author of the image told the AP that on arriving at the scene, “the girl’s arm around her father caught her attention”.

“This particular case puts me, made us sensitive, by the circumstances, by the father embracing his daughter in that last breath, the two drowned, how they went together to death,” Le Duc confessed, recalling that the wife Oscar and mother of the baby told the facts to the police “between tears” and “screams”.

2,000 migrants in Mexican camps
At the end of May, around 2,000 Honduran, Nicaraguan, Cuban, Brazilian and African migrants waited in their camps located in Matamoros for their asylum application to the United States. A situation similar to that experienced in other parts of the border, such as Ciudad Juarez, where the military detained migrants seeking to enter US soil.

After a negotiation between Mexican and American officials, the authorities of the National Migration Institute withdrew the camps along the river and transported people to various shelters.

The death of the Salvadoran father and daughter came after Mexico agreed to restrict their immigration controls and prevent the passage of Central Americans seeking to reach the US, in exchange for the Government of President Donald Trump not imposing tariffs on Mexican companies’ goods, which would have resulted in an economic recession for the Latin American country.

Reactions and outrage
The image provoked a wave of outraged comments in Mexico, including criticism of Trump’s immigration policy, which seeks his re-election as president of the United States. in 2020.

Other network users, on the other hand, highlighted in their comments the negative implications of the migration phenomenon.

This is not the only case that in recent days has caught the attention of the media, around Salvadoran migrants who die in tragic circumstances in Mexico. Zenaida, a 19-year-old woman, was shot and killed on June 14 while traveling through the state of Veracruz, a situation that had repercussions in El Salvador.