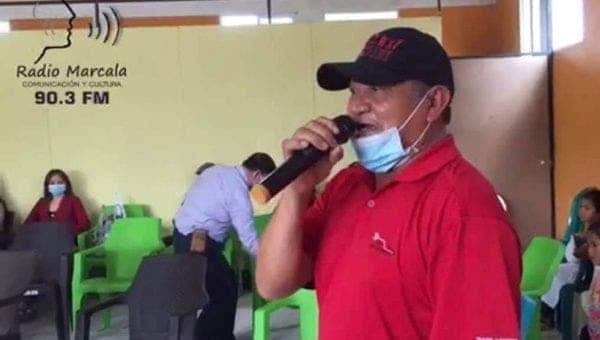 Vasquez was Secretary General of the Union of Rural Workers (UTC) in the department of La Paz and a pre-candidate for Congress.

December 27, 2020-  Lenca Indigenous leader Félix Vásquez was assassinated on Saturday night at his home in the village of Ocotal, in Santiago de Puringla, in the southern department of La Paz, Honduras.

A raid on his residence took place at around 8:30 pm when family members were at home, most of whom were young people and children who reportedly depended on Vasquez since the passing of his wife last year. Four men in balaclavas entered the home armed with a 9mm pistol and machetes, shooting Vasquez and terrorizing the family.

A few months earlier, Vasquez had reported to authorities that he and his family had received death threats.

Vasquez was the Secretary General of the Union of Rural Workers (UTC) in the department of La Paz and was a pre-candidate for Congress for the left-leaning Libertad y Refundación (LIBRE) party, the party of former President Manuel Zelaya. He had decided to enter electoral politics as a way to defend Hondurans’ rights, particularly against the encroachment of big landowners in natural reserve areas.

On December 16, Félix Vásquez had supported a demonstration demanding the release of the Indigenous leader of Simpinula, Víctor Vásquez, who was jailed for accompanying other indigenous leaders in defense of their territory.

He had just participated in what would be his final meeting on Saturday afternoon, with the Fondo Cafetero. Félix Vasquez is remembered as a man who was committed to social struggles, specifically for the defense of the common gifts of nature, the forests and rivers, the land and territory.

The targeted killing is being condemned across Honduras. “We condemn the murder of Félix Vasquez, Indigenous leader, defender of rivers and forests, fighter of LIBRE and pre-candidate for Somos Más for the department of La Paz,” tweeted former President Zelaya.