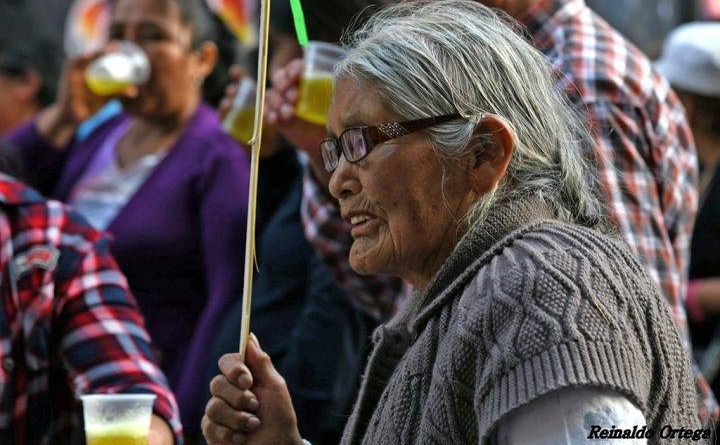 Release: From the Movement of Indigenous Women for Good Living on Bolivia and Chile

From the Movement of Indigenous Women for Good Living, we make public our wrathful repudiation loaded with pain, for so much spilled blood, both in Chile and Bolivia.

We categorically reject the #GolpeDeEstado in Bolivia. President Evo Morales, due to the bloodthirsty and racist hunt of the fascist corporate right, has resigned. However, we know that a president can resign from office, but the people will not give up their dreams. It is not about a man, it is about a struggle that illuminated the world, which brought forth the ancient voices of indigenous ancestors, a struggle that raised the wiphala, and that placed Evo as president. The indigenous peoples of Bolivia will remember their power again and this bloody victory of the right will be fleeting.

Ironically, the president has not resigned that all Indo-America wants to resign. Piñera, in Chile, despite the deaths, torture, violence, disappearances, injuries, remains arrogant and indolent in his presidential chair, foolish, cold, sinister. He doesn’t give up because of the business pressure that forces him to stay. The recently successful Chilean model of neo-liberalism cannot fall, the mentors of death, dominatora of the world, tell themselves. But it will fall, because there are peoples, with dignity and telluric force, moving the roots of the centuries of injustice with power; there in Ngulumapu, the Mapuche nation people have shed too much blood that has watered the seeds of all rebellions, waking up the Chilean people, and the peoples of the southern world.

We, Indigenous Women of the world, must unite, and with spirituality and wisdom fight, because only then we will win.

Here there is only one continent, which beats with only one heart, that of the Mapu, Pacha, Earth, we are the givers and molders of ways of life, this is our time, the time of our struggle; the force, the Newen of these worthy peoples, feeds our hope, but we must activate our solidarity, go out, march, shout, walk, fight but not leave our Sisters of Tawantisuyo and Wallj Mapu (from Chile and Bolivia) alone.

The plurinationality of the territories does not need authorization to be. We tear down borders, solidarity will expand without barriers. Neither the power of the churches, nor that of the military, will bow the struggle for a fair, dignified and diverse life in each territory.

From all the indigenous territories of the 36 Nations of Argentina, the women of the Movement for Good Living embrace the people of Bolivia, the people of Chile, the oppressed and struggling peoples from our rebellious and supportive hearts, and we make a call to be alert to prevent the Facist right from consuming its threats of massacres of Indigenous Peoples.