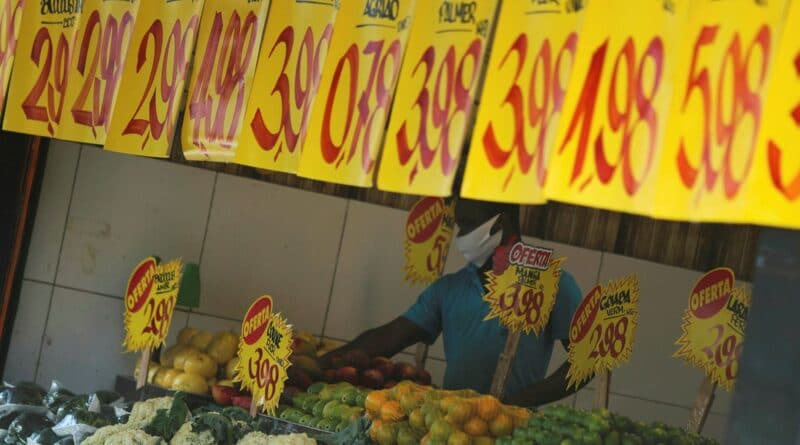 After last year’s economic carnage, the spectre of runaway inflation is the last thing the region needs.

As prices for many vital goods and services surge across the globe, central bankers in most advanced economies refuse to take their foot off the gas, even as inflation gets stickier. But things are very different in emerging economies.

Last year many emerging economy central banks slashed rates to extreme lows as economic activity ground to a standstill and inflation crumbled. But now many of them are frantically hiking them again as inflation returns with a vengeance, largely on the back of forces that are global in scope. They include low inventories, supply chain shocks, soaring shipping costs, labour shortages, extreme weather events, surging demand for certain commodities and consumer goods, and the huge monetary and fiscal stimulus programs still under way in most advanced economies.

Painful Memories
Latin America’s two largest economies, Brazil and Mexico, have respectively raised rates five times and three times so far this year. There’s likely to be more to come. Although rising commodity prices are largely welcome in the resource-rich region, most countries would rather avoid a return to runaway inflation, especially given the current weakness of their economies. In Brazil and Mexico anybody over the age of 35 can remember what life was like under high — or in Brazil’s case hyper- — inflation. They don’t want to go through it again.

Brazil:
In Brazil today inflation rates have tripled over the past year, from 3.1% in August 2020 to an anualized 9.7% in August 2021, its highest level since 2016. In September, the IPCA-15 consumer-price index — a mid-month predictor of the official inflation rate — surged by 1.14% over the month. If the indicator rings true, Brazil will soon report its highest reading for the month of September since 1994. That was when the country had just launched a new currency, the Brazilian Real, after being ravaged by its second bout of hyperinflation in seven years.

Currency Movements, Extreme Weather Events
There are a number of reasons why Brazil is suffering particularly high inflation right now, even among its peers. First, the Real has fallen around 10% against the dollar since July. As in Europe, the country’s energy market has been battered by unexpected weather events, including its worst drought in almost a century. Reservoirs in the Southeast and Midwest regions, which account for nearly 70% of the storage capacity, reached near-record lows of less than a quarter full over the summer. The drought has fuelled higher prices not only for food, as domestic production of staples has fallen, but also of energy, since Brazil depends on hydroelectric power for around two-thirds of the electricity it consumes.

By July marginal operating costs of the Brazilian power system had reached their highest levels since 2015. And energy prices, as IHS Markit warned in July, are a vital contributor to inflation since they have an impact at each stage of the production and distribution chain:

Both wholesale prices and retail tariffs are therefore likely to result in higher production costs for companies operating in the manufacturing sector such as the production of automobiles, chemicals, and metallic products. Low water levels will also affect the agribusiness sector, which will experience reduced water supply for irrigation and impaired movement of cargo through waterways.

By the end of August producer inflation had increased by 23.5% year-to-date. All activities monitored by the Brazilian Institute of Geography and Statistics (IBGE) registered price increases in August. The fact that prices are surging so fast at a time when the economy appears to be stagnating — it contracted by 0.1% in the second quarter — is of particular concern, raising the spectre of stagflation.

In Mexico, inflation is not quite as high as in Brazil, partly because Mexico’s central bank, Banco de Mexico (Banxico for short), didn’t cut rates as aggressively as most of its peers last year. AMLO’s leftist government also didn’t unleash nearly as much fiscal stimulus as its right-wing Brazilian counterpart. Nonetheless, the consumer price index (CPI) in Mexico still weighed in at 5.59% in August, almost double the central bank’s target rate of 3%.

Banxico raised its benchmark policy rate by 25 bps to 4.75% last week, saying that while it expects the shocks fuelling inflation to be transitory, they may still pose risks to the price formation process and to inflation expectations, due to their variety, magnitude and potential duration of their effects.

Core inflation, which excludes volatile food and energy prices and is widely considered an accurate indicator of long-term trends, rose 0.43% in August, its highest rate since 1999. Overall consumer price inflation is expected to top 6% in September, says Banxico’s deputy governor Jonathan Heath, who expects inflation to continue rising until at least January or February 2022.

Prices are also rising fast along the Andes. In August, Colombia’s consumer price index (CPI) clocked in at 4.44%, its highest level since 2017. Chile’s CPI reached 4.8% in August, its highest reading since late 2016. In September, Peru recorded its fifth consecutive month of rises, as its CPI surged to 5.23%. The last time it was that high was February 2009. All three countries have begun hiking rates in the last month.

The High Price of Tightening
But tightening monetary policy comes at a price. Raising rates risks squeezing even more life out of economies that are still on their knees after last year’s myriad shocks. It will also make it harder for heavily indebted businesses and consumers to service their debts.

Even before Covid, many of these economies were already in deep trouble. Mexico was just entering recession while Brazil was still recovering its longest recession in history (2014-17). Chile and Colombia had been rocked by massive social protests over economic inequality. With their weak currencies and limited fiscal arsenal, many LatAm countries were not able to provide the sort of financial support programs rolled out in more advanced economies. But they still took on a lot of new debt that will be difficult to pay back.

Between 2019 and 2020, public debt in Latin America grew by ten percentage points, from 69% of GDP to 79%. At the same time, the region’s GDP sank by 7% — the worst contraction of any region tracked by the IMF. By the beginning of 2021 GDP levels in the region had slumped to levels not seen since 2011. In effect Latin America lost a full decade of economic progress. It shed more working hours than any other region, suffered more than twice the global average loss of income, and accounted for close to a third of all jobs lost globally.

Venezuela is still in the midst of a humanitarian crisis, which is hardly helped by the economic war the US is waging against it. Caracas just launched its third new currency of this century, the so-called digital bolivar, lopping off 6 zeros from the previous iteration. The economy of  Argentina, another chronic invalid, is finally growing again after three years of recession. But inflation remains just over 50% and the country is still locked in negotiations with the IMF over the conditions of its next debt restructuring.

IMF Offers Limited Help
To boost global liquidity and help struggling economies, the IMF recently unveiled a new $650 billion allocation of Special Drawing Rights (SDRs), $44 billion of which went to LatAm countries. It’s a lot better than nothing but still not much compared to what has been lost. Sixty percent of the newly created money went to high-income countries. The US alone received 17% of the total despite the fact it can essentially print its own money at will.

One of the biggest threats facing Latin America (and the world at large) is surging food inflation. According to the UN Food and Agriculture Organisation (FAO)‘s monthly Food Price Index, global food prices were up nearly 33% in August 2021 compared to a year earlier. The biggest price increases were seen in meat (22%), wheat (43%), barley (36%) and vegetable oil (60%). Average prices overall are now at levels not seen since 2011, on the eve of the Arab Spring.

To compound matters, these price rises are happening at a time that millions of people have been pushed out of work and into poverty. In 2020, moderate and severe food insecurity affected 40% of the population of Latin America and the Caribbean, 6.5 percentage points more than in 2019, according to a study by World Vision International, a Christian relief, development, and advocacy organisation.

To try to keep rising prices at bay, central banks in Latin America are hiking rates as fast as they can. But their effect is likely to be limited given that the pressures stoking consumer price rises are largely global in scope.

Featured image: Brazil is among countries most affected. Figures had annual headline inflation at a five-year high of 9.7 per cent in August. © REUTERS