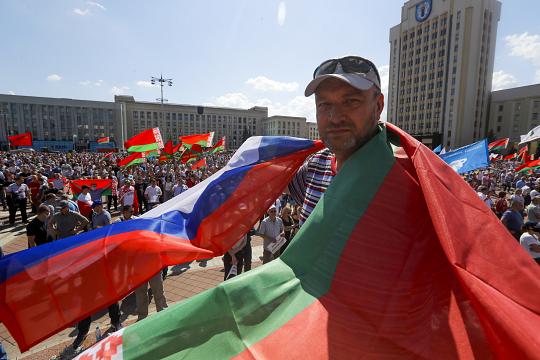 Belarus has been occupied and governed by many of the European empires to include the Polish Lithuanian Commonwealth, Napoleon, the Russian Empire and Germany during the second world war. It lastly became part of the Soviet Union in 1946.

Its infrastructure was devastated in the second world war and through the various military occupations over the centuries, its people have suffered grievously from German, Polish and Russian administrations, with its culture and language at times suppressed.

Having joined the USSR, the ties between Russia and Belarus have grown over the decades with Russia helping to rebuild the Belarusian economy and state apparatus in the years following the ‘Great Patriotic War’ of world war two.

Like its neighbour Ukraine, it had an influx of Russian migrants when jobs became available to rebuild a devastated nation.

Under the old Soviet system, it was commonplace for nations that made up the USSR block to become heavily involved in one major aspect of the economy so Belarus became home to many industrial plants and factories.

While Ukraine has traditionally been separated into two opposing factions, with Western Ukraine seeking greater ties with Poland and the EU, and Eastern Ukraine being more culturally at home with mother Russia, Belarus appears to be a more homogeneous, settled entity.

The lure of the European Union may come from political ideology and the avarice of those who will benefit from regime change, as opposed to any cultural values or historic affiliations with the EU.

One thing that appears self-evident is that self-interest groups in Belarus, the EU and American foreign policy are aligning themselves for yet another regime change propaganda war, which if it does not transit smoothly may ultimately lead to violent confrontations between the protesters and the government of Alexander Lukashenko.

The current leader of Belarus served in the Soviet Army in the Border Guards in the 1970s. He then sustained a career in the agriculture sector in the 1980s before becoming more prominent politically when leading accusations of ‘fraud and corruption’ against many of the then countries leaders in 1993 when he was ‘interim chairman of the anti-corruption committee’.

He was first elected President in 1994 after securing over 80% of the popular vote having faced off six other candidates in the preliminary round.

Under Yelstin, the Union of Soviet Socialist Republics was formally dissolved on 26 December 1991.

The dissolution of the union allowed many of the former Socialist Republics to declare independence and the decentralisation of power from Moscow to the national and regional governments became complete.

As the old Soviet Union died, nationalism and fascism some times fostered and encouraged by Nato and the West began to grow in eastern European countries, and it can be argued that the seeds for the Euro Maidan protests of 2014 were planted in 1991 and bore fruit through the coup against the legally constituted and elected government of Yanukovych, who was forced to flee under death threats from right-wing American backed fascists to Moscow, airlifted out of Ukraine by a Russian air force helicopter.

Since the end of the second world war, the raison d’etre for Nato and the ‘Cold War’ had the singular aim to destroy the Soviet Union and its defensive ‘Warsaw Pact’ military alliance in the eternal fight between Capitalism and Socialism.

RELATED CONTENT: Russian Foreign Affairs Minister Compares the Belarusian Opposition Strategy with that of the Venezuelan One

This fight continues today in Minsk and Belarus.

When the American Presidents and administrations told the Russians they had no designs on confronting Russia in eastern Europe they simply lied.

Many of the former Soviet Socialist Republics have embraced the Austerity led, pro-capitalist policies of the European Union while allowing western capital to buy many of the public utility companies, gas, oil, minerals, and banks in the former republics for the enrichment of the west and the enslavement of the east?

Nato now has many bases bordering on Mother Russia, encroaching yearly into the Russian Federation heartlands.

Ukraine and Belarus both have land borders with Russia and were once buffers between the EU and Russia. As Ukraine seeks to borrow monies from the International Monetary Fund, European banks, and American arms supplies, Belarus may be the last socialist centralised economy left in eastern Europe.

While the European Union for some presents the golden age of peace and prosperity in Europe this myth has proven to be false to many of the former soviet states, where job insecurity, homelessness, health and education have suffered under capitalist austerity led domination.

Belarus still has a chance to save its independence, its economy, its wealth and society from the ravages of pro-western capital which seeks to steal the resources of the nation from its people, to fill their coffers with the hoarded profits from the exploited work of the people.

I can only hope that the ‘dogs of war’ to be unleashed by the West and America will be skillfully addressed by the present government and that like Venezuela and Syria which have both suffered from violent armed protests aimed at destabilising the country and the regime, that the people will stand with the government.

What will Russia do is the crucial question as yet unanswered as events unfold in Belarus.

They did not allow Crimea, Lugansk and Donetsk to be occupied by the fascist coup which seized control in Kyiv in 2014.

I do not believe they will let another coup succeed on their doorstep.