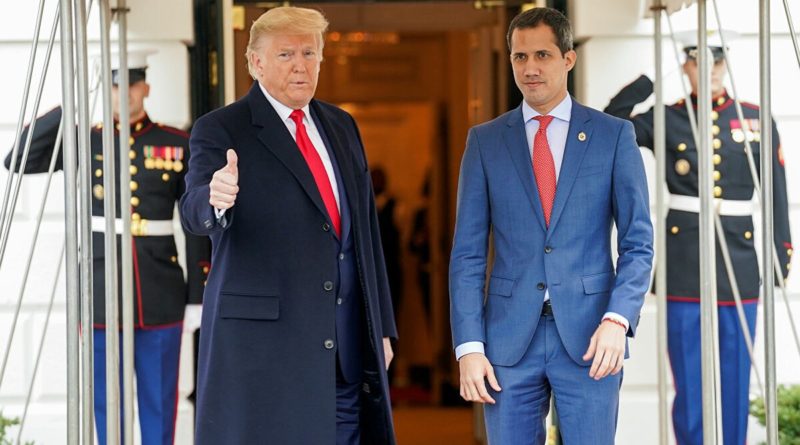 The recent events on the Venezuelan coasts show the insertion of foreign mercenary groups that tried to gather on Venezuelan soil to carry out terrorist acts and selective assassinations within the framework of a general destabilization agenda.

But in all this plot, the loose end of Juan Guaidó himself remains as a political operator exposed from multiple directions.

In his first known reactions on Sunday, May 3, Guaidó decided to distance himself from the events in progress. His narrative pointed to it as a government “false flag operation”.

A reaction clearly inconsistent with his record of promoting war in the country, probably motivated by the notorious dismantling of “Operation Gideon.”

From Sunday, and so until Tuesday the 5th, his narrative has gone from absolute denial to a pro-human rights stand on the captured operatives.

Juan Guaidó insisted this Tuesday, May 5, that the Venezuelan government infiltrated the maritime attack that was thwarted last Sunday in La Guaira, while accusing the Executive of having “massacred” those involved in these events.

In a statement that was published on Monday 4, Guaidó now denied that he was involved in the operation, again against the current of his record in failed attacks, such as the memorable “Operation Freedom” on April 30, 2019.

However, the plot that surrounds the Venezuelan deputy and his narrative drift seems much more complex, given that he is accused from multiple directions, pointing at new pressures and crossroads.

The construction of a story with events in progress

The accusations against Guaidó and his participation in these events are not exclusive to Chavismo.

As is known, while the events of Sunday May 3 were unleashed, in the afternoon a video circulated on social networks where Jordan Goudreau, an alleged former US green beret and owner of Silvercorp USA, was seen, along with Javier Nieto Quintero, a former Venezuelan army captain.

Both indicated that they were in charge of the mercenary operation and called on the FANB to mutiny against President Nicolás Maduro.

In the evening hours of Sunday the 3rd, the Venezuelan anti-Chavista journalist Patricia Poleo published an exclusive with Jordan Goudreau, who stated that Juan Guaidó had signed a contract with his company for $ 212 million, but that he had not paid.

Goudreau provided Poleo with a video that he recorded where he spoke with Guaidó by telephone, setting up the agreement.

These “revelations” are related to a previous publication by the Associated Press (AP) news agency signed by Joshua Goodman, which makes a detailed construction of the relationship between Goudreau and Juan Guaidó, giving details of the formation of mercenary camps in Colombia for projected operations in Venezuela.

The text explains: “The AP found no indication that US officials sponsored Goudreau’s actions or that Trump has authorized covert operations against Maduro, something that requires notification from Congress.”

In fact, AP does not refer in its article to the existence of the contract that was exposed on Sunday 3 by Patricia Poleo and of which the Venezuelan authorities at the highest level had already alerted that it existed, also indicating that the US government, through the DEA, was a participant in the operation.

The AP narrative appears to be a communicational cover-up operation that discounted US government involvement precipitously from actions that were imminent and have been thwarted in these days.

This Tuesday, the 5th, Donald Trump’s government indicated that it has no link to recent events in Venezuela. A statement that is perfectly consistent with various arguments that have emerged as events on the ground occur. Are we facing an orchestration?

The Venezuelan government has explained that the contract signed between Guaidó and Goudreau would be part of a US covert operation by the DEA in Venezuela, in which the war against the country has been outsourced.

Jordan Goudreau reported a breach by Guaidó under the terms of his juicy contract. The contractor emphasized, just as AP did, that the contract represented the development of a private coup, an exclusive matter between Venezuelans and Silvercorp, along the same lines as AP. Said this way, with the US denials, as well as by the revelations of AP, Goudreau and Patricia Poleo, everything seems to point exclusively to Guaidó. (There seams to be a connection between Poleo, Goodman and Goudreau)

They all expose it, they all serve it on a tray. All the narratives, let us emphasize, even that of the US citizens themselves, place Guaido at the center of the new failed operation.

Why are they exposing Guaidó?

It is perfectly understandable that the US government does not want to be openly linked to another disastrous operation in Venezuela, just as already happened in “Operation Freedom” on April 30, 2019 when its senior officials were in charge.

With Donald Trump seeking reelection and the Covid-19 health crisis wreaking havoc on his country, it makes sense for Washington to opt out.

However, that calls into question the reasons that expose Guaidó through Jordan Goudreau, given that, in his capacity as a contractor, he is unlikely to assume on his own account the overthrow of an objective government of a country, without US intelligence being aware, or worse still, without them acting, either to support it, or to disavow it in the face of the possibility of failure.

In short, it is highly unlikely that the US government is not involved in “Operation Gideon” and that this is another extremely mediocre “Bay of Pigs”, and nothing more.

Patricia Poleo’s presentation came to impose the narrative of the contract.

It is established as “disclosure” that the contract is the one that was published and not another. It ratifies the “private” nature of the operation and places Guaidó as the target of attacks by the Venezuelan diaspora in Miami, that is, the anti-Chavista entourages that subscribe to the armed route against Venezuela.

This diaspora is now targeting Guaidó for failing to comply with the terms of the contract signed with Goudreau, reissuing accusations that Guaidó “coexists” with Chavismo.

For what purpose is the US government sacrificing its political asset in Venezuela, the same one that has cost so much to diplomacy and institutionality in the Trump era?

Washington could be pointing to an escalation of mercenary actions for the development of an open war phase, a new critical point where Guaidó would be being placed as bait or a trigger for other actions by Trump.

But connecting Guaidó with the mercenary events in force, opens up another set of probabilities.

One of them could be that the mercenary raid responds to only one component of a much more complex plot.

It is evident that “Operation Gideon”, which encourages an open FANB insurrection, could only have operational viability with elements within the regular state forces and then be calibrated to a strategy of assassination and coup d’etat.

This implies that the false stories, the accusations of Guaidó and the failed maritime incursions, could consist of actions for distraction, which prolong a “momentum” and which would also then be an incomplete portrait of the real operation.

All of them are events that, looking at them endlessly, acquire new utility in a scenario where hidden actors emerge in the FANB or where, in other instances, new armed elements enter with a level of forcefulness and superior preparation.

An operation where some well-known Venezuelan military figures are sent to be captured, where two former US military are captured in Venezuela after their suicide mission and where the US government and other factors point to Guaidó as an accomplice.

Featured image: Donald Trump with Juan Guaidó prior to a meeting at the White House in early 2020. Photo: Kevin Lamarque / Reuters