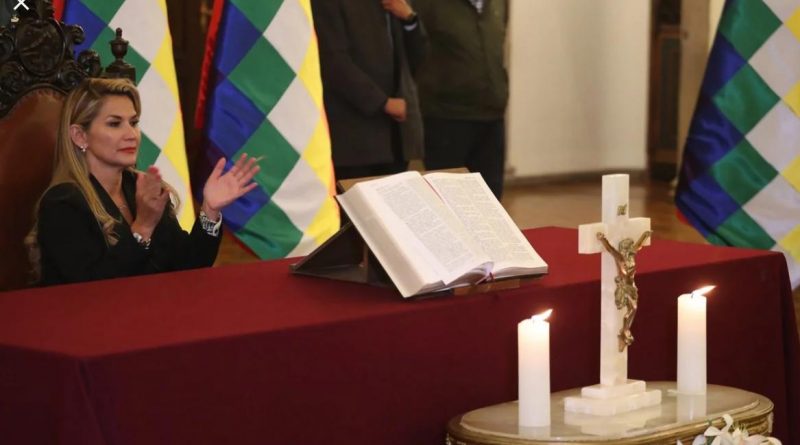 The professor emeritus of the UAM said that after the coup in Bolivia, what might happen is a sort of “religious struggle”, but that it is essentially political.

In Latin America and Bolivia in particular “we are facing an extremely serious moment,” said Enrique Dussel, Professor Emeritus of the UAM, in an interview for Aristegui Live.

On the statements of Jeanine Áñez, self-proclaimed president of Bolivia, who said she “pitieded Mexicans” for their “socialist” government of AMLO who gave asylum to Evo Morales, Dussel replied that she is “a person who knows and it has been publicly shown that she has been vested with the presidency after having made dissappear the true legal successors, that would be the vice president, the president of the House, and have swept the opposition violently by a coup d’etat, and she knows that Congress was not in quorum, therefore she is an absolutely illegitimate president… She seems to be speaking legitimately to a deeply legitimate government like Mexico’s”.

After the progress made by progressive governments in Latin America, such as that of Lula da Silva in Brazil and Kirchnerism in Argentina, now the region “took a step back,” resulting in a reorganization of the right that coincides with a series of phenomena such as what happened with the coup in Bolivia.

Dussel said the Bolivian case occurs unexpectedly before a government that had achieved so much success. “Bolivia was the poorest country in Latin America along with Haiti and now it is the one that has increased its wealth percentage annually like no other. No one could expect a reaction like the one that has occurred there,” he said.

RELATED CONTENT: Peoples of the World With Evo (Solidarity Statement)

After the last elections and the alleged electoral fraud they accuse Evo Morales of committing, Dussel proposes to start analyzing the situation from other perspectives and from new issues such as the reaction of that sector that had been in poverty, and thanks to the success of the progressive governments, has entered the middle class and “now, it already has other aspirations.”

“It is not just a matter of changing structures that are necessary to allow a certain economic growth of our people, but we also have to worry about how reality is interpreted,” he explained.

Enrique Dussel explained that now that progress has been achieved in objectives and institutions, attention needs to be paid to subjectivity. “Then we have a subject that basically aspires to be a neo-liberal consumerist, I would say to simplify the issue, and there a factor enters, and something very interesting happens.”

He pointed out that in the case of coup d’etats like Pinochet’s in Chile, those who led the movement did so with a goal with which they said they had to affirm a Western and Christian civilization against communism and socialism. However, things have changed today.

“It is no longer the western and Christian Catholic civilization of the right, but we are seeing a new phenomenon and it is the evangelical churches that are supporting the Brazilian process and now in Bolivia with a wild man like Fernando Camacho,” said the professor.

On the Bolivian civic leader, Dussel stressed that he has made it clear that he plans to remove the Pachamama from public places and instead impose the Bible. He explained that the Bible with which the opponents of Morales are leading the movement is about evangelical (radical) groups, “a phenomenon that has gone unnoticed.”

In it, “popular culture and especially of the original peoples are taken as something like ‘a horrible paganism’ which Christianity must replace from the roots. So that Bible is no longer a right-wing Catholic Bible, it is an evangelical Bible that comes from American sects that changes the subjectivity of an indigenous person who has his culture and uses and wants to transform him into a modern man.”

Dussel reiterated that what is happening in Latin America is “an ideological and novel phenomenon that is igniting in many places. It’s the same thing that has happened in El Salvador and that is coming to Mexico.”

The truth is that Bolivia has joined racism, he said. “That whiteness that despises the indigenous, the “cholas” that are the Bolivian women who have been humiliated, pulled, some shaved, unexpected things, but that which coincides with the OAS doctrine directed by Almagro and all that gives an unknown panorama in Latin America, we must face it very seriously ”.

“On Monday, the policemen came out with an almost indigenous face but with a cross, those were the policemen who stood up against Evo Morales. What did a cross have to do with a cop? It has a lot to do, it is a fundamentalism of the evangelical right, but not the traditional one, it is new and that is the issue,” he said.

Dussel pointed out that in the face of this scenario, what can happen in Boliva is a kind of “religious struggle”, but that it is essentially political and that explains another issue that is liberation theology, which is Christian, but that is supported by the poor and their traditions against the rich.

“That is, it raises as a slogan the one that the founder of Christianity had ‘Blessed are the poor, cursed the rich’ , that this is reversed by evangelical groups and that is a whole theoretical historical revision, that the left is not used to,” he said.

The phenomenon of evangelism has spread throughout Latin America and that is because”, says Dussel, “any good speaker can put up a religious group, he makes his living from it, and does not need much theological culture, training or organization, but it grows like a business. ”

“A pastor learns from a certain other language, certain use of biblical texts and builds an argument that is no longer properly messianic, evangelical, but what is contemporarily ideological, with biblical texts and puts his community to tithe and then they get rich, ” he added.

Professor Emeritus explained that they have managed to grow in part because of the poverty of the region. “Our people are distressed, poor, suffering and do not know the meaning of all that. They give them a meaning: leave all that dire customs and become an austere, hardworking, well organized man and you will get out of poverty because God will bless you with acceptable wealth. ”

Dussel said that the Bible used by evangelists has been “reinterpreted from where a modern American man is the origin of a new life and that, is today used by the OAS and by a new American policy that is withdrawing from the Middle East because they have been defeated, they return to Latin America and want to recover it. ”

“We are in a situation of recovery policy where we have returned to the coup,” he concluded.