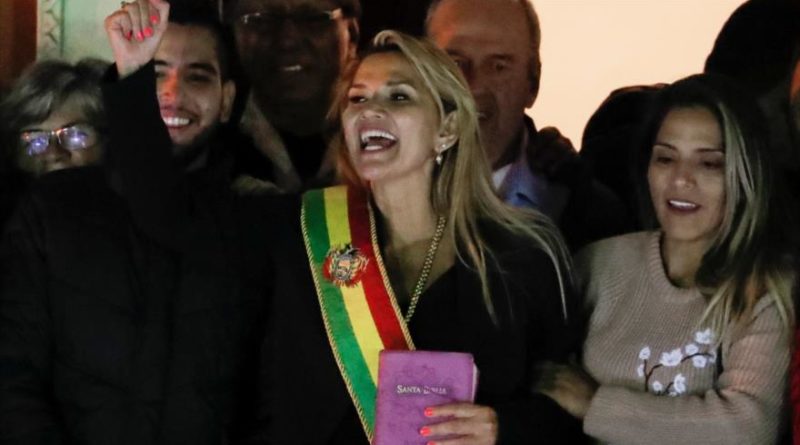 The Bolivian Prosecutor’s Office admits a complaint against Carolina Ribera, daughter of the self-proclaimed interim president, Jeanine Áñez, for improper use of State assets.

On April 30, Carolina Ribera, who is a representative of the Social Management Unit of the Ministry of the de facto government , in full quarantine due to the outbreak of the new coronavirus, causing the COVID-19 disease, used an Air Force plane (FAB) for the transfer of unauthorized people, in connection with the celebration of her birthday party, which generated a wave of criticism.

For this reason, the Bolivian attorney general, Juan Lanchipa, informed local media on Thursday that he has a complaint against Ribera in hand, due to the trip that was made on a FAB plane transporting individuals, including a friend of Ribera, the deputy Ginna Tórrez, and her son Mauricio Raña, to travel from Tarija to La Paz (capital).

The complaint against the daughter of the self-proclaimed president was filed on Monday by the lawyer Tamer Medina on behalf of an older adult woman, a cancer patient, who considered it outrageous that official flights are being used for the transfer of individuals in the pandemic for birthday parties, while she had no travel support to carry out her cancer treatments.

The lawyer reported that the woman tried to file the complaint last Thursday, but the Prosecutor’s Office would not accept the filing under the quarantine argument. Then, she tried again this Monday at 09:00, but she was prevented again. Subsequently, the lawyer published the case on social networks and it went viral, so, according to what he reported, he was called by the Prosecutor’s Office to notify him that they would proceed the complaint, for which he appeared and delivered the filing at 11:45, as recorded in the signed receipt of the procedure.

“The fact that the complaint has not been received previously draws powerful attention, generating many doubts, many comments on the role that the Departmental Prosecutor’s Office of Tarija is playing in relation to political decision-makers, ” Medina said.

Along these same lines, Deputy Tórrez justified the trip with Áñez’s daughter, arguing that she would be attending a session of the Plurinational Legislative Assembly of Bolivia, in La Paz.

Also, faced with strong criticism, she justified that she had “a knee problem” and that traveling alone was “very difficult” for her.

Amid the Covid-19 pandemic, which has infected more than 3,372 people with 152 dead in Bolivia, criticism abounds for the de facto government’s mismanagement and lack of response.

Featured image: The president of the de facto government of Bolivia, Jeanine Áñez, and her daughter Carolina Ribera (right), in La Paz, November 12, 2019.