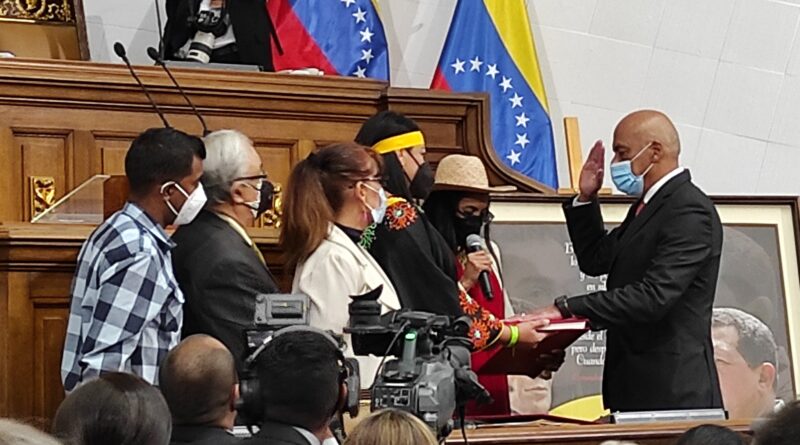 During a meeting with elected representatives from the Great Patriotic Pole (GPP), on the eve of the installation of the new National Assembly, the Venezuelan President, Nicolás Maduro, reported that Diosdado Cabello will be the head of the parliamentary bench. Cabello presented the Parliament’s directive proposal: Jorge Rodríguez will be its president, Iris Varela will be the first vice president, Didalco Bolivar the second vice president, Rosalba Gil will be the secretary and Inti Inojosa undersecretary.

“We all have great commitment: this is not just for the directive, it is the job of all MEPs meeting here today. The worst thing we can do is turn our backs on the people, we must stay by the side of the people,” said Diosdado Cabello.

Jorge Rodríguez also shared some thoughts, and reminded the deputies that they have “a great responsibility granted by the people on December 6, the people told us that we must rescue that power that has been so attacked during these last 5 years.”

For his part, President Nicolás Maduro proposed Diosdado Cabello as head of the GPP parliamentary bench, made up of 256 deputies.

“The Carabobo 200 Plan is going to rule this year. I have asked that emphasis be placed on the economy, in addition to political dialogue and reconciliation.” Maduro also emphasized “rescuing the controlling functions (of the AN) and the interpellation of officials.” He also stressed the importance of “the Bloque de la Patria appointing those most qualified to direct the commissions of the National Assembly.”

He also reiterated the call of deputy Didalco Bolívar to summon all of Venezuelan society to a great national dialogue, and that the legislative body functions as a meeting and debating point within Venezuelan politics.

Finally, he announced that the oldest deputy, Fernando Soto Rojas, will be the one to act as head of debates and provisional secretary in the installation of the new National Assembly, giving an initial speech in which he will provide an historical balance sheet of the Bolivarian Revolution.

On Wednesday as planned, Jorge Rodríguez was sworn in as the new president of the Venezuelan National Assembly. In his speech, he insisted on the importance of making the legislative body a space for political debate between different political groups, and also talked about reconciliation but without impunity.

“Shove your sanctions, Donald Trump, Mike Pompeo, Juan Guaidó and Julio Borges, wherever they will fit you,” said Rodríguez in reference to the illegal US and European sanctions enforced in order to oust President Maduro.

Rodríguez also referred to the crimes led by the leadership of the old National Assembly: “There can be no forgiveness with forgetfulness, there can be no reconciliation with amnesia. They have dared to do things that do not fit even in the darkest horror novels,” he said in a direct call to put an end to the impunity around Juan Guaidó that has caused so much pain to ordinary Venezuelans and billions of dollars in losses.