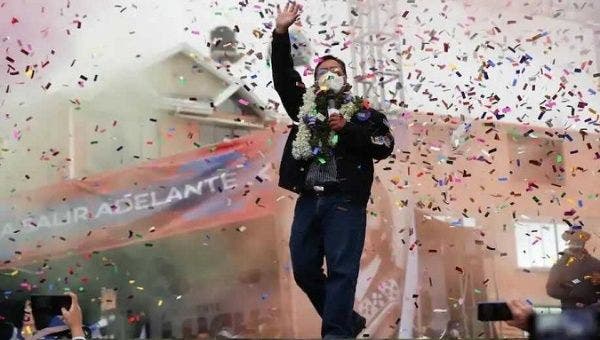 The Bolivian Supreme Electoral Tribunal (TSE) today completed 100% of the electoral count, which ratified the victory of Luis Arce’s Movement Towards Socialism (MAS) with over 55 percent of the votes in favor.

The MAS gained a total greater than 26 points over the right-wing Citizen Community Party (CC) led by Carlos Mesa. CC received 29% of votes, while Luis Camacho’s Creemos party came in third place with 13% of the vote, followed by Front for Victory, with 1.55%, and Pan-Bol with 0.55%.

The last departments to conclude the counting were Santa Cruz and La Paz.

Celebrations for the restoration of democracy in Bolivia at 2am. pic.twitter.com/FOOInqEFhL

This Friday, at 18h00 local time, the TSE will announce the final results of Sunday’s elections.

Over seven million people cast their votes in the elections, in which only five candidates ran for president.

The elections were postponed twice this year due to the COVID-19 pandemic.