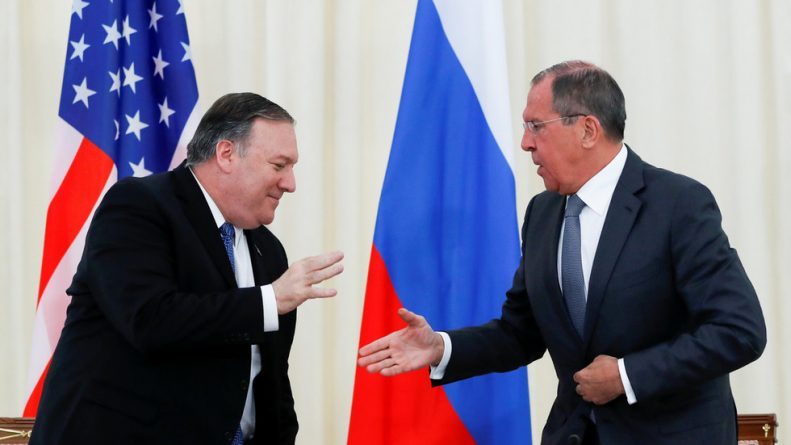 US Secretary of State Mike Pompeo and Russian Foreign Minister Sergey Lavrov concluded the Sochi talks by agreeing to cooperate on nuclear arms control. The two diplomats, however, could not reach agreement on Venezuela.

After emerging from a sit-down in the Russian Black Sea resort on Tuesday, Pompeo and Lavrov both talked of their governments’ desire to improve relations, currently at a low ebb. Lavrov described the meeting as “frank and useful,” while Pompeo said the US “stands ready to find common ground” with Russia.

With the New START nuclear arms reduction treaty set to expire in February 2021, Pompeo said that Washington is willing to work towards extending the deal by five years, while the Russian FM said he hopes any future agreements will be “positively received by both nations.”

“Maduro has brought nothing but misery to the Venezuelan people,” Pompeo stated. “We hope that Russian support for Maduro will end.”

Lavrov stuck by Moscow’s position on Venezuela – which refuses to recognize opposition leader Juan Guaido as “interim president” – saying that dialog between Maduro and the opposition is the only way to ensure stability.

“Democracy cannot be done by force,” Lavrov told reporters. “The threats that we hear against the Maduro government, threats that come from the mouths of US officials… this has nothing in common with democracy.”

‘We don’t see a war with Iran’

Amid the buildup of US naval power in the Persian Gulf, and rhetorical shots fired back and forth between the Trump administration and Tehran, Pompeo tamped down talk of war on Tuesday.

“We fundamentally do not see a war with Iran,” the secretary of state said, adding: “We’ve made it clear to the Iranians that if American interests are attacked, we will certainly respond in an appropriate fashion.”

Lavrov also did his best to dispel tension, stating that Russia hopes “reason will gain the upper hand.” The Russian FM stated his opposition to Washington’s pullout from the 2015 Iran nuclear deal last year, adding that Russia will continue to work with the European parties to the deal to keep dialog with Iran open.

Lavrov also addressed reports that the US is preparing to deploy 120,000 troops to the Middle East in response to the supposed Iranian threat, saying that he hoped the reports were “baseless” rumors. Pompeo deflected the question, saying it was a question for the Department of Defense. As both diplomats talked, Trump denied the report, telling reporters in the White House that “it’s fake news.” Nevertheless, the president added that “If we did that, we’d send a hell of a lot more troops than that.”

Election interference?
Even after the publication of the Robert Mueller report cleared Trump of “collusion” with Russia, the topic of alleged election meddling has lingered. Pompeo gave Lavrov a warning against interfering in America’s “sacred” elections, while Lavrov ridiculed accusations of Russian interference.

“We can discuss this topic forever, but until we have cold hard facts on the table, we cannot have a grown-up discussion about it,” Lavrov said. He shot back at Washington too, accusing the US of running its own interference campaign in Russia’s domestic policy.

Lavrov then revealed he handed a “memorandum” on US interference in Russia to Pompeo but would not make it public, adding “we’re prepared to talk on this topic.”

A day before the meeting, President Trump announced that he would meet with Russian President Vladimir Putin at next month’s G20 summit in Osaka, Japan. Lavrov said on Tuesday that the Kremlin has not yet received an official invitation, but would “respond positively” to one.

Pompeo and Lavrov will likely meet again on the sidelines of the G20, with the US State Secretary telling Lavrov that the two will “have many more opportunities for conversation.”