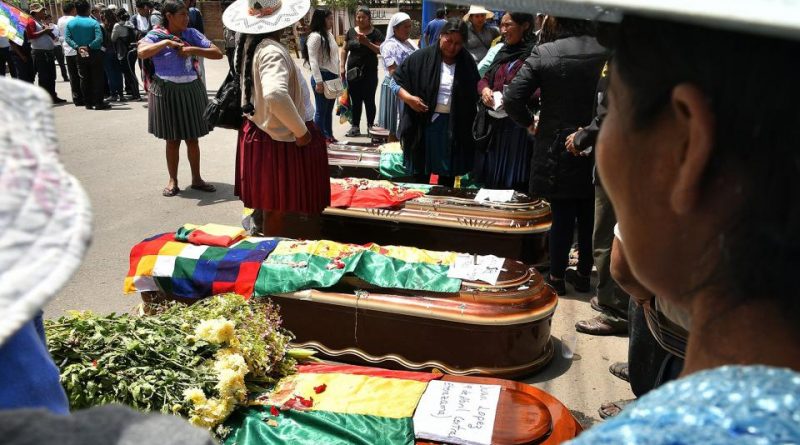 After the Cochabamba massacre, the illegal president gave the FF.AA. immunity

Decree 4078 approved by Añez exempts the military from responsibility when they participate in “the operations for the restoration of internal order.”

There were nine dead and one hundred and fifteen injured in the so-called “Cochabamba massacre.” That was an act of repression, there has been no confrontation,” said the representative of the Ombudsman for Sacaba, Cochabamba, Nelson Cox. All the deceased were shot in the head or chest, he added.

There are thus a total of 24 dead in Bolivis, according to the Ombudsman’s Office. These figures show what has been experienced in the country since the coup d’etat last Sunday when President Evo Morales and Vice President Álvaro García Linera were forced to resign.

The repressive escalation and death have scaled vertiginously and the announcement on Saturday anticipates that it will increase. Indeed, decree 4078 was approved, approved by the government of the self-proclaimed president Jeanine Añez, which dismissed the military’s responsibility when participating in “the operations for the restoration of internal order and public stability.”

The decree establishes that the Armed Forces may “make use of all available means that are proportional to the risk of the operations.”

The knowledge of the order given by the government generated adverse reactions from the Inter-American Commission on Human Rights ( IACHR ). Thus, five days after the announcement that the Bolivian Armed Forces (FAB) are to take control of the streets, the authorization to proceed with impunity was made official.

“It’s a carte blanche for impunity to slaughter the people,” Evo Morales wrote from his Twitter account.

The presence of the FAB on the roads of the country and streets of the main cities began on Monday night, after the Bolivian National Police (GNP) requested military reinforcement in view of the uprisings, in particular that occurred in the city of El Alto.

From that night they began to fly over military airplanes and helicopters, and the tanks were presented daily in the vicinity of the Murillo Square, where the seat of government and the legislative power are located. Bolivia is in a de facto state of siege.

This escalation was exacerbated by the statements of Añez, who said they face destabilizing actions of “armed subversive groups.” In this way the three central elements have been set in motion: the military operation, its legal support and its narrative justification. The Cochabamba massacre was its implementation.

RELATED CONTENT: “Satan, Out of Bolivia!” – The Ritual of Camacho and His Sect

In this context, the meeting between the United Nations envoy, Jean Arnault, and Añez took place. Arnauld explained in his statements that he will meet with all leaders and actors to address two central issues: the “pacification” of the crisis and the “call for free elections to which all actors are committed.”

The electoral issue was also addressed in a press conference given by the presidents of the Senate chambers, Eva Copas, and deputies, Sergio Choque, both of the Socialism Movement (MAS). There they announced that they will convene a session of the Plurinational Assembly on Tuesday to discuss the call for new elections.

One of the responses to the announcement came from Oscar Ortiz , current senator, former presidential candidate, who said that the call “seeks to destabilize the democratic transition” and, he added, that “the MAS seeks the destabilize.”

The electoral issue is one of the central variables of the current situation. Those who lead the coup d’etat and current dictatorship announced from the beginning that there will be a call for presidential elections. This requires the election of new authorities of the Supreme Electoral Tribunal (TSE), which needs an agreement within the legislative field.

It is not yet known whether the agreement for the TSE will exist or if the de facto government will seek another way outside the Constitution. Meanwhile it advances in one of its central objectives: to persecute political, social leaders, to force asylum, to kill selectively or in scenarios such as the Cochabamba massacre.

The coup plan is to reach elections having decimated the forces of the process of change, of the social movements that have taken to the streets, of the MAS, and has announced, through the impunity decree, that it will advance in that plan. It has, to sustain itself, the FAB, the GNP, the political and business class that seeks restoration and revenge, as well as the American political-diplomatic protection.

The situation in Bolivia is in dark hours: without the rule of law, with authorization for the FAB to kill, threatened and persecuted leaders and journalists, a de facto government that multiplies threats, and a blanket of silence that tries to make invisible what happens.

Featured image: In Cochabamba, citizens surround the coffin of the dead in the repression of Sacaba. Image: AFP