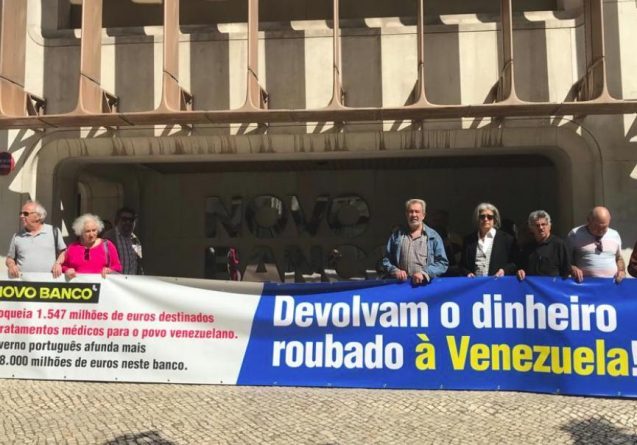 Social movements in Lisbon, Portugal, demanded that Novo Banco immediately return the Venezuelan resources illegally withheld, as part of the financial, economic and commercial sanctions imposed by the United States Government against the South American nation.

The day of peaceful protest, which raised the slogan “Return the stolen money to Venezuela”, was held at the gates of the headquarters of Novo Banco, an institution that holds about 1,543 million euros that would be allocated to the purchase of food and medicine.

RELATED CONTENT: Crimes of the Blockade: The Story of Children with Bone Marrow Transplants

“From Lisbon, Portugal social movements in solidarity with the people of Venezuela protest in front of the headquarters of Novo Banco SA to immediately unblock the resources belonging to all Venezuelans, which has been forcefully snatched,” said the Foreign Ministry of the Republic through a message posted on Twitter.

Previously, the Chancellor of the Republic, Jorge Arreaza, issued an invitation to join the campaign initiated on May 30 last by the International Association of Democratic Lawyers (IADL), with the purpose of requesting Novo Bank to return Venezuela’s funds.

The AIDL denounced that the “arbitrary action” of the Portuguese bank is the result of pressure from the Donald Trump administration on the government of Portugal, in order that “they may bend to the criminal blockade against the economy and the people of Venezuela, by imposing unilateral coercive measures, adopted without the approval of the United Nations Security Council, in violation of the Charter of the United Nations and international treaties on human rights”.