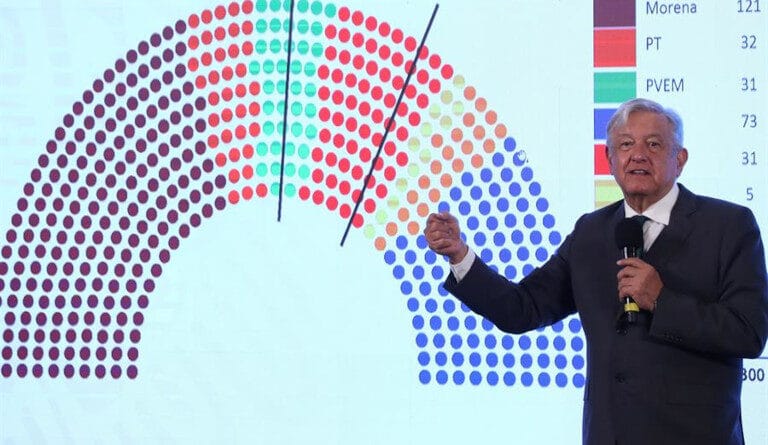 On Tuesday, June 8, the President of Mexico, Andrés Manuel López Obrador, refuted a series of malicious interpretations and distorted narratives about an alleged defeat of his party, MORENA, in Sunday’s midterm elections.

During his routine morning press conference at the Palacio Nacional, President López Obrador showed the official figures of the National Electoral Institute (INE), which give MORENA a significant lead and which demonstrate a clear win over the opposition parties. This was done to demonstrate that there has been a tendency to distort the results of the election in the Mexican and international corporate press.

With the help of graphs and charts from the INE, which completed its vote count the previous night with more than 99% of the tally sheets counted, López Obrador informed that MORENA and the Juntos Haremos Historia coalition won 11 of the 15 competing governorships, plus another one that MORENA allies Green Party (PVEM) and Workers’ Party (PT) won in the state of San Luis Potosí.

The conservative National Action Party (PAN) and the Va por México coalition won only the governorships of Chihuahua (by a thin margin) and the usual PAN bastion Querétaro, while the Movimiento Ciudadano party (MC) triumphed in Nuevo León.

At the state level, Obrador pointed out that after these elections, the number of governorships ruled by MORENA and the Juntos Haremos Historia coalition is now 17 out of 32 states, including Mexico City. The PAN and PRI party coalition holds eight states; PRI has only four by itself, the Greens and the Workers’ Party together have one, and MC holds two.

In regard to the Senate, with 128 seats that were not part of this mid-term election and will remain unchanged until 2024, MORENA holds 60 seats, which is the same as before. ”There we did not lose the majority because MORENA never had it,” Obrador explained.

The election of the Chamber of Deputies was once again favorable for MORENA, since out of the 300 districts in which legislators were elected, MORENA won 121, PT 32, and Greens 31, with which the government coalition got 184 out of 300 seats.

This is a simple majority, since the ruling coalition exceeds 61% of the total seats, which is 10% more than what is required for the approval of the budget, which is 51%. What the opposition had wanted most was to take away that majority, but they could not do it, explained the president.

“If we need a qualified majority, it could be reached through agreements with a certain sector of the legislators, but surely this will not be required when it comes to debates on constitutional reforms. That is the political panorama so far,” added President López Obrador.

Obrador remarked, there will be ideological differences, and if it did not exist, it would be because “we would be living in a dictatorship, but in a democracy there is plurality and the right to dissent and full freedoms must be guaranteed, but debate must be carried out in a peaceful manner and through the electoral route.”

The president admitted that the dirty war carried out by corporate media was effective amongst the middle and upper classes of Mexico City, where MORENA lost nine mayorships out of 16, but the smear campaign failed to penetrate the working class, who were not fooled. Even the Wall Street Journal took part in the media dirty war that frightened some segments of the population that went out and voted against the MORENA project, concluded López Obrador.