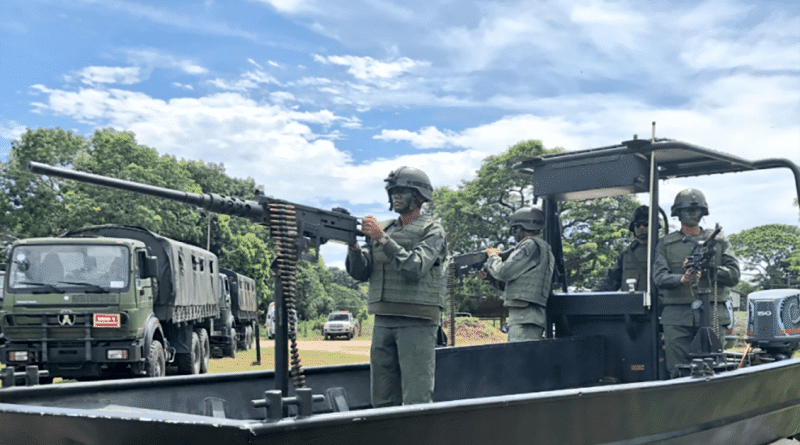 “I have ordered the Operational Strategic Command of the Bolivarian National Armed Forces (CEOFANB) and all the military units of the border, to declare an orange alert against the threat of aggression from Colombia against Venezuela, and to carry out the “Sovereignty and Peace” military drills from September 10 to 18,” said the Venezuelan Head of State during a master class for FANB personnel.

The president ordered the chief of the CEOFANB, Remigio Ceballos, to carry out the exercises throughout the western border of Venezuela that covers the states Zulia (northwest), Táchira (west) and Apure (southwest), with the aim of commemorating the creation of that military division 14 years ago.

The President explained that it will serve to “tune the entire weapons system, the entire operational deployment, the morale and the military activity necessary for Venezuela to preserve its peace and tranquility.”

The entire deployment by presidential order is an effect of the threats of terrorist attacks dismantled by intelligence and security services of the Venezuelan State, with evidence presented by the sector vice president Jorge Rodríguez last weekend.

The investigations revealed links between terrorist cells that wanted to attack in Venezuela and the government of Iván Duque in Colombia, the beachhead of the irregular war sponsored by Colombian narco paramilitarism (and US Imperialism).

In addition, President Maduro reflected on the ongoing unconventional war against Venezuela:

“We are the victim of a multiform war of an unconventional nature. It is not the traditional military war, it is an underground war, it is a war that aims not only to end with the President of the Republic, it has a greater objective: to dismember and destroy the State and Venezuelan society so that exogenous forces enter to control natural wealth. ”