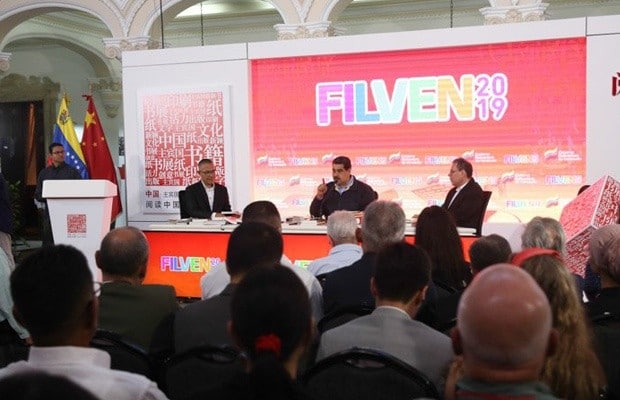 The president of Venezuela, Nicolás Maduro, has stressed that the uprising of the people of Chile is an opportunity for all of Latin America.

“Chile is writing pages of glory in history in this year 2019, we will not forget this year, because it has been the year of the Chilean awakening and if Chile wakes up, all Latin America wakes up,” Maduro has praised.

The Venezuelan president made these statements this Thursday during the inauguration of the XV International Book Fair of Venezuela (Filven) 2019, in which he has greeted the Chilean writer Marco Álvarez, emphasizing that “he comes from rebel Chile”.

In addition, Maduro has once again expressed support for popular demonstrations in Chile, against the administration of Sebastián Piñera.

The Venezuelan leader has also referred to the resistance of the Chilean nation, and has emphasized that Chile “will not stop until it achieves its own path.”

Maduro has repeatedly demanded that the Piñera executive put an end to the brutal repression against those who claim their rights in the streets of the country.

In addition, the Foreign Minister of Venezuela, Jorge Arreaza, for his part, expressed concern about the human rights situation in Chile and recalled that Chile is a member of the Human Rights Council of the United Nations Organization (CDHNU ) and should not violate the rights of the population.

The protests in Chile began with a student protest against an increase in the subway fare, but protesters directed their complaint to other issues, including the end of Piñera’s mandate, which they hold responsible for economic problems due to his neoliberal measures.

Chilean police have used real ammunition and tear gas to repress protesters; a measure that has resulted in 23 dead and thousands injured, according to official data.