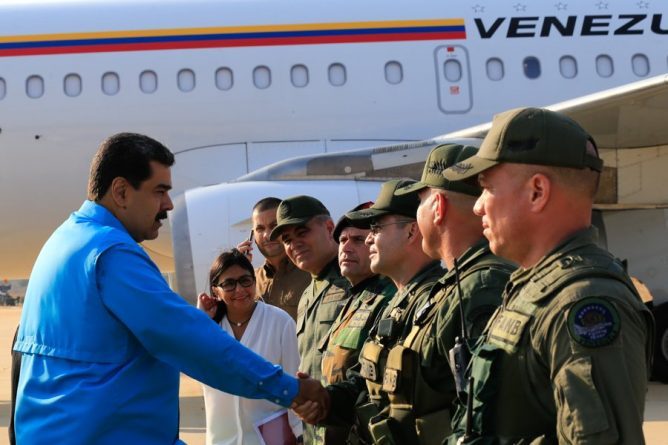 Venezuelan President Nicolás Maduro confirmed on Wednesday that he gives “absolute support” to the 4-phase Plan designed by CARICOM, Mexico and Uruguay in the meeting that will begin on Thursday, February 7 in Montevideo, Uruguay, for peace and dialogue in Venezuela. “We are ready for a process of dialogue and we are ready to participate,” said the president who arrived on Wednesday afternoon at General Rafael Urdaneta Air Base, Zulia state, in order to participate in a military exercise, heading to the Bicentenary of the Speech of Angostura.

“The first meeting to help and promote dialogue for peace in Venezuela has been a success and I reaffirm complete support for the plan of the four phases proposed by the Montevideo mechanism with the governments of Mexico, Uruguay and Bolivia, plus the fourteen countries of the Caricom”, he said during his participation in the Military Exercises from the General Air Base in Chief Rafael Urdaneta.

He also insisted that Venezuela is setting an example. “The battle we are waging in Venezuela is not only for us, it is not only against the colonialism that wants to enslave us, it is also the battle for humanity, it is a battle for dignity … if Venezuela falls, the rest of the peoples around the world will fall, if we win, the cause of humanity will win, “said the Worker President.
Four stages

From this Wednesday until Thursday, February 7, the first day of the Peace and Dialogue Conference for Venezuela was held in Montevideo, Uruguay, to find an understanding of the situation in the South American nation. The Foreign Ministers of Uruguay, Rodolfo Nin Novoa, and of Mexico, Marcelo Ebrard, explained on Wednesday that the so-called “Montevideo Mechanism” will consist of four stages:

Maduro also indicated that Venezuela has to denounce the imperialist threats of the USA to the world, “so that a great wave of solidarity with Venezuela will rise and that the public opinion of the United States will annul the threats of Donald Trump”, said the head of State .
The national leader called on the Bolivarian National Armed Forces (Fanb) to defend territorial sovereignty in any scenario. “You are the shield of the western part of the country by water, by land, by air and you have to guarantee, together with the people, the sovereignty, the territorial integrity and the full enjoyment of the rights of the people,” he said.