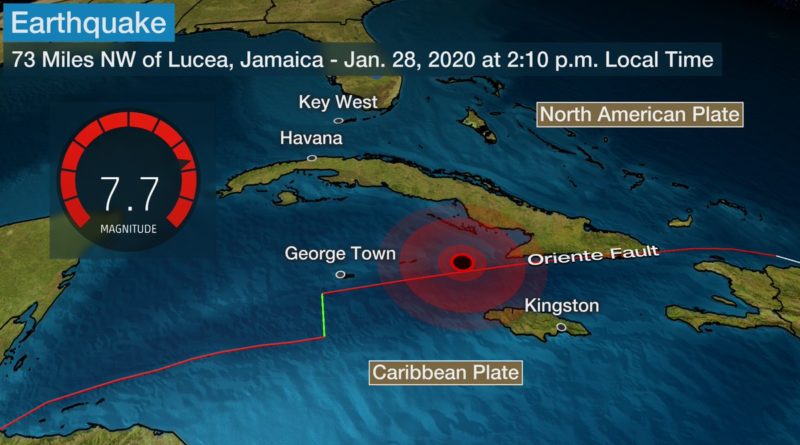 The first images of the 7.7 earthquake that was felt in the Caribbean, specifically in the islands of Jamaica and Cuba, emerge. The event was recorded just passed 2pm and it raised fears of a dangerous tsunami.

TeleSur reported that the head of Cuban National Seismological Service, Dr. Enrique Arango Arias, clarified there is no danger of tsunami for Cuba.

#earthquake in the Caribbean: The Head of the National Seismological Service Dr. Enrique Arango Arias clarifies that there is no danger of tsunami for #Cuba pic.twitter.com/1XdRUyWWZ2

Other cities like Miami in the US and some in Mexico also reported being affected by the earthquake that struck the Caribbean basin on Tuesday afternoon.

RELATED CONTENT: Japan May Have to Dump Radioactive Water into Sea

The earthquake was originally rated a 7.3 by the U.S. Geological Survey but was later upgraded to a 7.7. The epicenter of the earthquake was 78 miles northwest of Lucea, Jamaica, and was shallow with a depth of 6.2 miles.

This is from the Grand Cayman Island as a 7.7 earthquake occurred off the coasts of Cuba and Jamaica. (Via Jaiden Martin Sins on Facebook) pic.twitter.com/Wxtr8xMkX5

File under "what not to do during an earthquake" https://t.co/QH2KGCPvvK