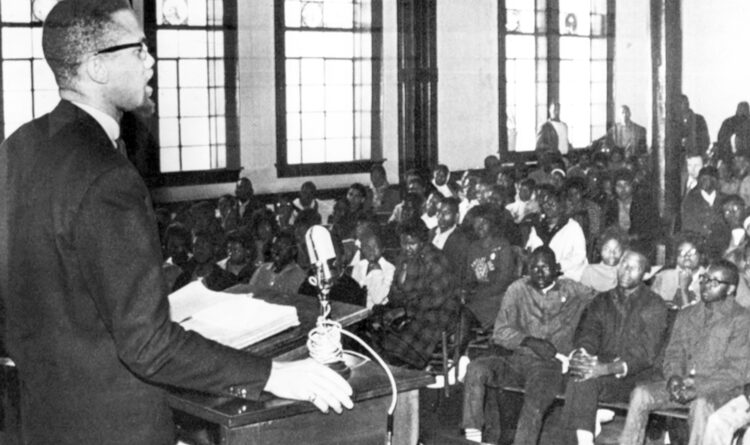 Editorial note: Orinoco Tribune generally publishes articles no older than 15 days old as an internal rule. With this piece we are making an exception, in order to celebrate the legacy of Malcolm X, 56 year after his assassination by US “law enforcement.” Long live the anti-imperialist example of Comrade Malcolm X!

The excerpt below is from February 1965: The Final Speeches, by Malcolm X, one of Pathfinder’s Books of the Month for February. It is from the speech “There’s a Worldwide Revolution Going On” given in Harlem, New York, Feb 15. Malcolm X came out of the bourgeois nationalist Nation of Islam to become the outstanding leader of the Black liberation movement of the 1960s in the US. He was drawn to the secular revolutionary government in Algeria as well as to the internationalist example of the Cuban Revolution. He opposed both the Democrats and the Republicans, the ruling parties of US imperialism.

A January 1965 Young Socialist interview with Malcolm is reprinted in Malcolm X, Black Liberation, and the Road to Workers Power by Jack Barnes, national secretary of the Socialist Workers Party. Malcolm became “a revolutionary leader of the working class,” Barnes said. The excerpt from Malcolm X below is reprinted as a tribute during Black History Month. Feb 21, 2021 marks 56 years since he was assassinated, six days after giving this speech. Copyright © 1992 by Pathfinder Press. Reprinted by permission.

When the Black man in the Caribbean sees the brother on the continent of Africa waking up and rising up, the Black man in the Caribbean begins to throw back his shoulders and stick out his chest and stand up. [Applause] Now, when that Black man goes to England he’s right inside the English power structure, ready to give it trouble. When the Black man from the French West Indies goes to France, why the effect upon him of the African revolution is the same as the effect upon us here in the States by the African revolution. …

So this is what you have to understand. And as the brothers on the African continent lead the way, it has an effect and an impact upon the brothers here, upon the brothers here in the Western Hemisphere. So that when you find the Afro-American community in France uniting not only with itself, but for the first time beginning to unite and work in conjunction with the African community, this frightens old de Gaulle to death, because he sees some new problems in front of him.

Likewise, here in America, with you and me. For the first time in our history here you find we have a tendency to want to come together. For the first time we have a tendency to want to work together. And, up to now, no organization on the American continent has tried to unite you and me with our brothers and sisters back home. At no time. None of them. [Applause] …

So this has been the purpose of the OAAU and also the Muslim Mosque: to give us direct links, direct contact, direct communication and cooperation with our brothers and sisters all over the earth. And once we are successful in uniting ourselves with our people all over the world, it puts us in a position where we no longer are a minority who can be abused and walked upon. We become a part of the majority. And then if this man over here plays too rough, we have some brothers who can play as rough as he. [Applause]

Featured image: Malcolm X speaks to young civil rights activists in Selma, Alabama, Feb 4, 1965. In the last weeks of his life, Malcolm spoke increasingly as a revolutionary leader of the entire working class. Photo courtesy of The Militant.