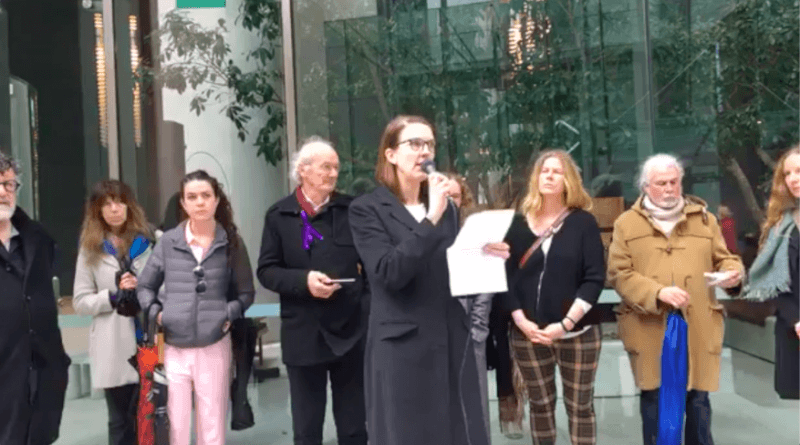 Below is a transcript of a speech given to a rally held outside an invitation-only Media Freedom conference at the luxurious harbourside Barangaroo development in Sydney
As members of the Alliance for Journalists Freedom gather in Barangaroo to discuss Media Freedom, we are gathered here, outside, to ensure that the persecution of multi-award winning Australian journalist, Julian Assange, is not swept under the conference rug.

We are here to remind conference attendees that while they congregate on Sydney Harbour’s waterfront, their colleague, Julian Assange, lies silenced, isolated and emaciated, in the hospital wing of Belmarsh Maximum Security prison.

The Alliance for Journalists Freedom is, of course, right to denounce the recent Federal Police raids on journalists in Australia, the secret Information Warrants against journalists, and draconian Australian legislation criminalising journalism, in what MP Andrew Wilkie describes as Australia’s ‘pre-police state’. It’s frightening.

However, the fundamental fact is that there can be no media freedom, in Australia or elsewhere, without fighting the US extradition of Australian journalist and publisher Julian Assange.

RELATED CONTENT: Breaking the Media Blackout on the Imprisonment of Julian Assange

The legal precedent that Julian Assange’s extradition would set has been described by Pentagon Papers lawyer James Goodale as “bloodcurdling”. As long as any possibility exists that US authorities can seize an Australian citizen on UK soil, for journalistic activity performed outside the United States, media freedom worldwide hangs by a thread.

The precedent that US extradition would set is that any journalist, anywhere in the world, could be arrested across legal jurisdictions and national boundaries, simply for telling the truth. If that happens, no serious public interest journalist, no matter their nationality, would be safe.

Such a future may seem unimaginable from the comfort of a harbour-side media conference. But if the psychology profession teaches us anything about predicting the future, it is that the best predictor of future behaviour is past behaviour. States, authorities and judiciaries that have persecuted a publisher for journalism before can be expected to do it again. And again. And again.

And if the psychology profession teaches us anything about abuse of power, it is that unchecked power and unchecked abuse will escalate. States that abuse their power with impunity by persecuting a publisher for journalism can be expected to keep abusing, and keep persecuting.

RELATED CONTENT: “We are Moving into a New, Controlled Society Worse than Old Totalitarianism” – Zizek on Google Leak

There is no longer any excuse to remain silent about Julian Assange’s persecution. We now know that all the fake justifications for his abuse are bogus. From the Swedish investigation to Russiagate, all have been legally and factually shot down in flames.
Most recently, in an explosive eyewitness account, highly respected Australian investigative journalist Mark Davis attested that in 2010 it was Julian Assange, not the Guardian, not the NYT and not Der Spiegel, who redacted names to protect identities.
Mark Davis tells us that Julian Assange worked single-handedly throughout the night to redact 10,000 names, by himself. The trope that Wikileaks was reckless with redactions, which has been bandied around for years, is false.

And yet, here we are, having psychologically tortured Julian Assange within an inch of his life, literally, for almost a decade, over things that he never did.

Now we stand warned by the UN Rapporteur on torture, Nils Melzer, Julian’s father John Shipton and renowned Australian Journalist John Pilger that Julian Assange is gravely ill in Belmarsh, after all these years of state-sanctioned abuse, and could die as a result.
If that happens, if Julian Assange does die in prison, with him we will lose our chance to become a society that doesn’t torture its journalists to death. No amount of media freedom conferences will ever bring us back from that. 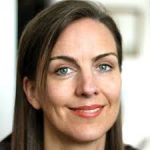 Dr Lissa Johnson is a clinical psychologist and practice principal in private practice. Prior to becoming a psychologist she qualified in Media Studies, with a major in Sociology. Lissa has a longstanding interest in the psychology of social issues and the impact of social issues on psychology, and is a former member of the Australian Psychological Society Public Interest Advisory Group.

Dr Lissa Johnson is a clinical psychologist and practice principal in private practice. Prior to becoming a psychologist she qualified in Media Studies, with a major in Sociology. Lissa has a longstanding interest in the psychology of social issues and the impact of social issues on psychology, and is a former member of the Australian Psychological Society Public Interest Advisory Group.