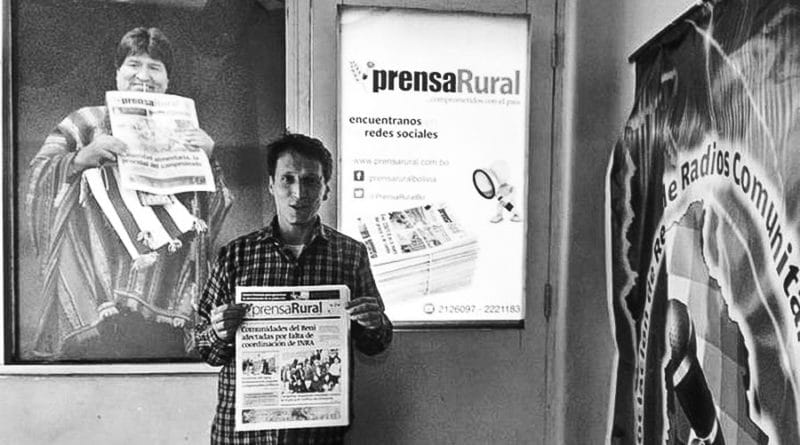 Sebastian Moro’s last known words before he was found were denouncing the kidnappings of government officials and mob attacks on journalists and media outlets.

Argentinian journalist Sebastian Moro was found unconscious, left for dead, covered in bruises, scratches and other signs of violence on November 10. Moro was wearing a vest identifying him as press covering the dramatic U.S.-backed coup against democratically elected President Evo Morales in Bolivia.

The 40-year-old worked for the influential Argentinian newspaper Pagina/12. Hours earlier he had denounced what he saw as a far-right takeover of power. His last known words, published in his newspaper hours before he was found, were denouncing the kidnappings of government officials, and mob attacks on journalists and media outlets. He had been one of the only voices exposing the local opposition’s campaign of terror to the world. Moro spent six days in a La Paz hospital before finally succumbing to his injuries.

Despite the world’s attention being focused on the Andean country, media has steadfastly ignored the likely beating to death of a foreign journalist for political reasons. No mention of Moro has been made in the New York Times, CNN, MSNBC, Fox News or any mainstream Western outlet, despite his story being well known in his native Argentina. Nor has his case been mentioned by the major human rights networks such as Amnesty International or Human Rights Watch. Even the Committee to Protect Journalists has not acknowledged his killing. Its list of deceased journalists in 2019 shows none across South America.

In fact, both media and the human rights industry have been leading a campaign to legitimize the new coup administration of Jeanine Añez and whitewash her crackdown on independent media. Taking their line from the Trump administration, corporate media refused to call the events in Bolivia a coup, preferring instead to frame it as Morales “resigning.” The New York Times welcomed the end of the “increasingly autocratic” Morales and expressed its relief that the country was in the hands of more “responsible” leaders. Meanwhile, the Wall Street Journal’s headline read “a democratic breakout in Bolivia.”

Human Rights Watch, too, has been key in pushing through the U.S.-backed overthrow of a democratically elected head of state and whitewashing the violence that still engulfs Bolivia. Its director Ken Roth claimed that the coup was an “uprising” aimed at “defending democracy” from a “strongman” while the organization described Añez’s law giving Bolivia’s notorious police and armed forces complete immunity from all crimes while they massacred protestors as merely a “problematic decree.”

Bolivia's Evo Morales was "the casualty of a counter-revolution aimed at defending democracy..against electoral fraud & his own illegal candidacy. The army w/drew its support because it was not prepared to fire on people in order to sustain him in power." https://t.co/jeVnGta0Kk

In fact, the only English language source that has reported on Moro’s death is the Orinoco Tribune, a tiny Venezuelan website with a staff of two people, according to its website. The Tribune translated an Argentinian article and published it on its website. MintPress News reached out to the Tribune for comment on the story. The editor replied that Moro’s case, as well as the total media silence over it, highlighted the need to create and encourage new grassroots media outlets. It also noted that after the coup against Honduran President Manuel Zelaya in 2009:

One [of the] very first gestures the U.S. coup against Zelaya made in Honduras was to shut down community radio and snatch journalists. Tortured reporters were then tossed out on the highway as a warning for others. The lucky ones lived. The coup in Bolivia seems to be on the same learning curve.”

As MintPress has reported, there has been a coordinated assault on independent media in Bolivia. New Communications Minister Roxana Lizarraga announced that this was part of the “dismantling of the propaganda apparatus of the dictatorial regime of Evo Morales,” claiming that Morales’ “militants who misused the state media system” are being “withdrawn.” Outlets like TeleSUR and RT en Español have been shut down and reporters have been shot. Lizarraga also declared that she would persecute any journalists involved in what she called “sedition,” noting that she already had a list of “troublesome” individuals and outlets.

Human rights groups have also been subject to oppression. New Interior Minister Arturo Murillo directly threatened a newly arrived human rights delegation from Argentina. “We recommend these foreigners who are arriving…to be careful,” he said, “We are looking at you. We are following you,” warning them that there will be “zero tolerance.” He added that “At the first false move that they make, trying to commit terrorism and sedition, they will have to deal with the police.” Fourteen members of the group were subsequently arrested, to silence in the press.

The largest NGOs exist primarily to protect and advance power under the guise of standing up for human rights. Human Rights Watch started as an anti-Soviet Cold War propaganda machine, Amnesty International’s co-founder was an FBI asset involved in the murder of Black Panther leaders like Fred Hampton. This explains their disinterest in Moro’s murder amid the wider crescendo of violence in Bolivia. Those that stand up to power are rarely remembered fondly in corporate media.

Feature photo | Sebastian Moro poses with a copy of Prensa Rural, one of the newspapers he worked in Bolivia, in front of a portrait of ousted Bolivian President Evo Morales. Photo | Facebook/Sebastian Moro