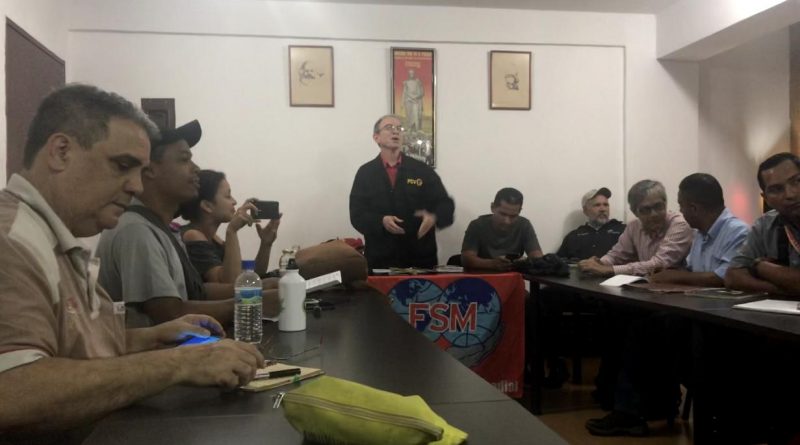 Caracas, 28/Jul/2019 (Orinoco Tribune).-Last Friday July 26th, the Classist Front Cruz Villegas belonging to the Venezuelan Communist Party held a meeting with international union delegates and Venezuelan union leaders to share ideas and evaluate the status of the labor movement, in Venezuela and the countries in attendance, all this within the framework of the Sao Paulo Forum that concluded today in Caracas.

The event was chaired by Pedro Eusse, National Labor Movement Secretary, and later on by the Secretary General of the PCV, Oscar Figuera, and have in attendance local union leaders from Empresas Polar, Coca Cola-Femsa, Electrical Workers, Inces,Venevision among others. International delegates represented countries like Paraguay, Ecuador, Dominican Republic, Mexico, Colombia, Sweden and the USA. Pedro Eusse began the event welcoming all present and reiterating the PCV rejection of the self-appointed Juan Guaido and imperialism, in Venezuela and worldwide, and the US Sanctions. He stressed that the Bolivarian Revolution has not been directed by the working class and recognized the responsibility of the Communist Party in this reality and at the same time referred to it as a common situation among progressive processes in Latin America.

In his analisis, he stressed that this is the main limitation of the Bolivarian Revolution and that it has deepened during President Maduro’s government (the reformist approach). “As a proof of that you can see that many enterprises created by Chavez like Abastos Bicentenarios, Mercal or PDval have been dismantled, workers were fired and stores closed and now they are being reopened as private entities. They prioritize food imports instead of local production and that connects also with corruption”, he added.

He also brought attention to the salary deterioration for Venezuelan workers with a minimum wage rounding US$ 3.5 a month but he also explained that people survive because services are almost free but extremely inefficient and also because the Clap program delivers boxes of food every month to more than 6 million families nationwide although he mentioned a recent deterioration in the frequency and the quantity of food and lack of proteins within the Clap program.

He highlighted how in recent months, the Communist Party has denounced a new Labor Guidelines published by the Minister of Labor Eduardo Pinate in which they flexibilize collective bargaining process and thus promote a deterioration of salary and working conditions. He mentioned that Coca Cola fired (suspended) 2000 workers because of that in the last months. “The government is helping the private sector to stay alive in detriment of workers labor conditions”, he said.

He also called attention to the fact that many unions are not being legalized because they are not under the umbrella of the pro government Central Bolivariana de Trabajadores. “We need to fight together, in Venezuela there is no socialist revolution,” he concluded.

Then a session of comments was open in which every union delegate in attendance was invited to express their opinions and concerns:

1.-Angel Navas (Fetraelec): This federation covers 42 unions and has had 2 elections in recent years. He reiterated that after Chavez’s death, there has been a regression in the achievement of the working class. “The crisis is being put on the shoulders of the working class” he said. He also mentioned that there is a tendency of delay in electoral processes within the unions that is affecting their legality and also that the government does not consult on relevant issues with the workers. 2.- Suarez (Pepsi-Cola/Polar Union): He criticised the Labor Ministry guidelines and mentioned that 43.000 workers have lost their jobs since 2014 in that corporation alone and reiterated that workers have been losing their benefits. 3.-Freilis Colmenares (Industrial Catering Union): He said that the owners have connections with the government affecting the workers when fighting for their rights and added that their collective bargaining has been frozen for more than two years. 4.-Arnoldo Becerra (INCES union): He also expressed that their collective bargaining was suspended and critizised that the INCES is not doing the work needed to deal with the massive migration of professionals that is affecting the working force of Venezuela. 5.-Maria Barreros (Coca Cola-Femsa): She referred to Article 148 in the Venezuelan Labor Law that is one of the biggest obstacles in protecting workers and prioritizing private corporations. She also referred to the suspension (layoff) of 2,500 workers in recent months and criticized the Minister of Labor performance. 6.-Erasmo Rodriguez (Union of Workers in Anzoategui State): He denounced “Consorcio Bones” for laying off 1200 workers and that the State Labor Inspector Uber Rondon (relative of national pro government labor unionist Franklin Rondon) is one of the main problems for the workers in the region. 7.-Norielkis Blanco (Speaker Collective 2 de Junio / Barrio Adentro): They are a foundation and because of that they have always been mistreated by labor law and entities. She denounced that they have been denied unionization for years because of this loophole. “We manage to gain some benefits over the years but in recent months we have lots them” she added.

8.- Salazar (Sinatra Venevision): He said that revolutionary workers are being harassed in this corporation, and even some union leaders have had their houses raided. 2000 workers have been fired. Currently there are only 700 hundred workers out of 3000 that they were a few years back. 9.-Ildefonso Ordero (Workers for Aragua State): He referred to the situation in “Hilados Flexilon” having only 74 workers out of the 500 they were a few months ago. He announced that there are deals between labor inspectors and owners facilitating the layoffs but they managed to denounce the situation and the Labor Inspector and the head of Insasel were removed. Then the international delegates participated in this order:

1.- Jaime Leon from Ecuador (Communist Party): He denounced the radical process of privatization led by the neoliberal government of Lenin Moreno and mentioned that the US$ 4000 million approved by the IMF had the condition of the betrayal of Julian Assange and to erode the labor conditions of workers. He mention that Venezuelan migrants are also being affected by this precarization of working conditions and mentioned also that the government is evaluating changing the retirement age but they won’t allow it. 2.-Patricio Enega from Paraguay (Communist Party): He mentioned the struggle they currently have countering the corrupt government of Mario Abdo Benitez involve in an scandal in electrical grid contracts. 3.-Hector Maravillo from Mexico (Communist Party): He mentioned a recent successful mobilization of more that 90.000 workers defending their salaries and talk about an initiative promoted by the Trump administration to increase salaries in the north of Mexico to avoid salary dumping. He also stressed that the new government of Andres Manuel Lopez Obrador does not represent an important difference with the previous mexican government. 4.-William Fortich from Colombia (FARC Party): He mention the precarization of workers conditions all over Colombia and how that is even affecting Venezuelan migrants. He highlighted that the bank system is taking advantage of the crisis and is promoting credit as an alternative that on the contrary is deepening the economic crisis. He said that for the classist workers the enemy is the “Central General de Trabajadores” and concluded, mentioning that there is a new genocide in Colombia, the fifth since the 50’s and social leaders and activists from the left are been executed regularly. All delegates finished the meeting with congratulatory words for the success of the workers struggle worldwide and evaluated the event as a big success in the exchange of perspectives from different countries and in knowing the conditions of workers in Venezuela.