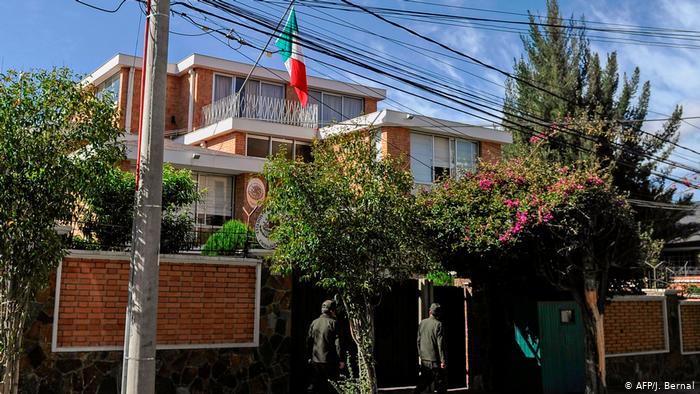 The government of Mexico, through the Ministry of Foreign Affairs (SRE), in a communique called on the Plurinational State of Bolivia to “fully respect and cover the obligations of the Bolivian State with respect to article 22 of the Vienna Convention on Diplomatic Relations”. This document indicates that “the premises of the mission are inviolable”, so that the agents of the receiving State may not enter them “without consent”.

Bolivia's police under the de facto regime is surrounding the Mexican embassy in this country, where Mexico is providing asylum to some 20 officials from Morales government. The government of @lopezobrador_ has denounced this could violate the Vienna Convention. pic.twitter.com/jldAat7JXG

“The government of Mexico expresses its deep concern about the excessive presence of Bolivian intelligence and security services personnel who monitor both the residence and the embassy . . . since November 11,” the statement said. On that date, former president Evo Morales accepted the political asylum that Mexico offered him after resigning from the presidency of Bolivia in the midst of a post-election crisis.

Complaint before the OAS

In addition, the Permanent Mission of Mexico to the Organization of American States (OAS) reported that since December 21, 150 police and Bolivian intelligence agents surround the official Mexican residence in La Paz. “These security elements, rather than protect, have intimidated and monitored the interior of the facilities, as well as Mexican diplomatic personnel accredited by the government of Bolivia,” Mexican officials detailed in a text sent to the OAS Permanent Council.

Morales arrived in Mexico on November 12, but on December 6 he left the country for a brief stay in Cuba before being relocated in Argentina.

About twenty Bolivians close to Morales, including two former ministers, were received at the Mexican embassy after the president’s resignation. Some of them have arrest warrants issued against, but the diplomatic headquarters has refused to hand them over in full exercise of asylum regulations. While La Paz refuses to give them safe passages to leave the country in full disrespect of International Law referring to Asylum.

Venezuelan Chancellor, Jorge Arreaza posted in his twitter account: “Venezuela rejects and denounces the police siege at the headquarters of the Mexican Embassy in La Paz, Bolivia. Respect for the inviolability of diplomatic offices is an essential principle contemplated in the Vienna Convention on Diplomatic Relations.”

President Evo Morales posted in his twitter account: “We repudiate that the de facto government in the style of military dictatorship violates the Vienna Convention on Diplomatic Relations by encircling the Mexican residence with police officers and using drones that violate their airspace to intimidate and endanger security of the asylees.”