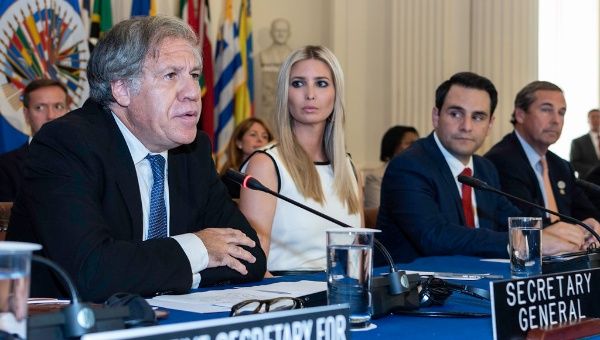 “No one should interfere in the elections of a country, even less, say when it is not yet concluded. Your job should be limited to technical advice and not try to make binding decisions.”

The Mexican government has criticized the OAS Electoral Observation Mission (MOE) for prematurely raising ‘concerns’ about Bolivia’s elections before carrying out a full audit which the Bolivian government invited them to do.

Mexico’s representative at the OAS Luz Elena Baños said, “No one should interfere in the elections of a country, even less say when it is not yet concluded. Your job should be limited to technical advice and not try to make binding decisions.”

The Inter-American Democratic Charter, in article 23, says that OAS can provide advice or assistance, but cannot rule on election outcomes. Mexico is concerned that the OAS is abandoning its supposed commitment to neutrality.

“We demand respect for sovereign processes and condemn the fallacious claims of some member states of this organization, that despite being under major social and political upheavals, intend to become judges and monitors of democracy in other countries of the region. We call for the sovereignty and institutionality of the Plurinational State [of Bolivia] to be respected. ”

The OAS has raised ‘concerns’ over the fact that preliminary projections of results (known as the TREP) were suspended. However, the TREP is not an official result that can claim defeat or victory for a given candidate. The only binding result is the live count of each vote, known as the ‘Computo’ which is published on the electoral court’s website here.

The OAS has been leading the charge in criticizing leftist governments in Venezuela, Cuba and Nicaragua.

Meanwhile, more neutral observers have praised the electoral process. One of the leading observers visiting La Paz, Rixi Moncada, who is the president of the electoral court in Honduras, praised the level of independent monitoring that took place. “The vote count is open to all who want to see it… we could see the noting down of each of the votes from each ballot paper.”

Another observer, Manu Pineda, a Spanish lawmaker in the European Parliament, also spoke to media praising the legitimacy of Bolivia’s electoral process. “In Spain ballots are counted and assigned very quickly, however in Bolivia, each ballot paper is held and shown to all, so there cannot be any manipulation, the vote is then recorded publicly on a board for all to see. The count takes a very long time, but we can see that it’s a positive thing because it stops any possibility of fraud.”

“Everything has taken place with total normality and regularity,” Sandra Perreira, another EU lawmaker, from Portugal, commented.

With over 98 percent of votes counted, leftist President Evo Morales has announced his victory as he has surpassed the 10 percent threshold over his second place rival Carlos Mesa. However, right wing protesters have taken to the streets, sometimes violently, against the result that gives Morales another term. Morales himself has labeled these acts of violence as a coup attempt, and invited the opposition to present cases of fraud if they exist.