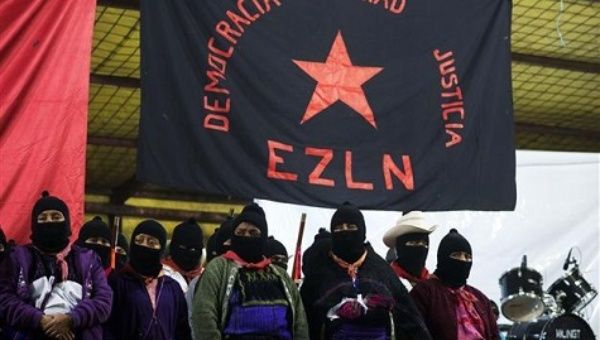 “This exponential growth is due to the organizational and political work of the Zapatista women, men, children and elderly,” the group said.

The Zapatista Army of National Liberation (EZLN) published Saturday a statement to report the creation of new rebel and autonomous municipalities in different areas within the southwestern state of Chiapas in Mexico.

The total number of “caracoles” will thus increase from the five originals to sixteen, which summed up with the 27 municipalities, will represent a total of 43 Zapatista centers.

“This exponential growth, which allows us to jump over the fence, is due to the organizational and political work of the Zapatista women, men, children and elderly,” and “the destructive policies of the government whose racism and contempt paved the way for more resistance and rebellion.”

“After years of work, despite the siege, despite the campaigns of lies, despite the defamations, despite the military patrols, despite the National Guard, despite the counterinsurgency campaigns disguised as social programs, despite oblivion and contempt, we have grown and become stronger,” said the statement that warned the arrival of the current government should not be misleading and that far from marking the beginning of a new era, it was merely a continuation of the previous one.

“The ruler has no other homeland than money,” said the document, recalling that Indigenous people cannot be waiting for governments to free them or fight for their rights.

Since Mexico’s President Andres Manuel Lopez Obrador took office on December 2018, dozens of activists and social fighters were assassinated, among them Samir Flores Soberanes, who was shot after “being pointed out by the ruler,” and for protesting against a pipeline project.

The statement firmly denounced AMLO, accusing him of keeping ahead with neoliberal projects and harming policies.

In the context of the latest political assassinations, this new Zapatista campaign will be called “Samis Flores Lives” (Samir Flores vive), to honor the “brothers and the sisters who died, are still persecuted, have disappeared, or are in jail,” the text reads.

The Zapatista movement has long been at odds with Lopez Obrador. Since the first time he ran for president in 2006, the EZLN organized an alternative campaign and declared its opposition to the center-left candidate.

The relations have soured even more as AMLO announced two mega-projects that resulted in a public uproar by the EZLN, as well as the creation of the National Guard to stop migration flows.

The EZLN statement was released as part of an agreement made in October 2016 at the moment of the national meeting of the National Indigenous Congress (CNI), an organization of communities, nations, towns, neighbourhoods and indigenous tribes of Mexico, created by the EZLN to take concrete action for the defense of territory and “our mother the earth.”

The Zapatistas explained that “the time has come” to be accountable to the CNI and to the Indigenous Council of Government (CIG), but also to the organizations, groups, collectives, and individuals that in Mexico and worldwide support the Zapatista movement and its struggle.