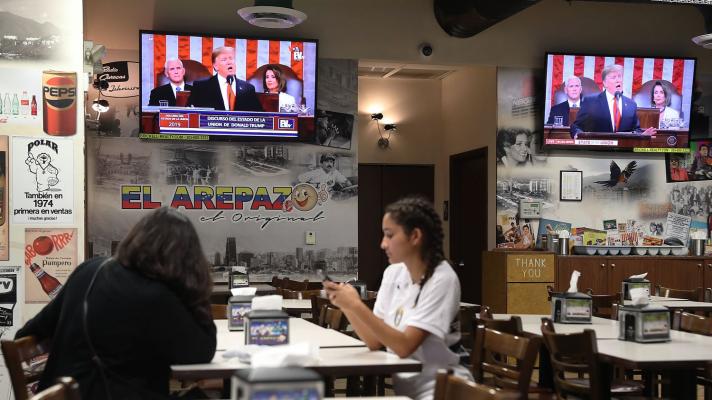 Let’s answer the question “Why is Miami important to Venezuela and the US elections?” succinctly, taking into account the influence of Venezuelan citizens who have decided to reside in South Florida, frequently enemies of the Bolivarian Revolution, who have sided with Donald Trump lately, and who could support Biden to win the US presidency if he guaranteed the long-awaited “regime change” in Venezuela.

The important thing for this axis is that Washington deepens its aggressions in the Caribbean basin, regardless of who wins on November 3.

“THE DIASPORA”: ORIGIN
Today, where millions of tourists cross the streets of Disney World and many others bathe on the affluent shores of the Atlantic coastline, Ponce de León founded a Spanish colony in the 15th century that would become part of the North American Union in the 19th. Hence the profusion of “Latino” settlers—especially in the coastal cities like Miami or Tampa—and of Spanish as a quasi-autochthonous language.

Florida is a state that’s currently torn between two political cultures. One, the northern part, belongs to the Deep South; the other has globalist aspirations, and therefore it isn’t surprising that, when reviewing the development of Miami as a cosmopolitan city, we find that a lot of drug money was laundered in the extensive construction and speculative businesses that made it an attractive place for investors, legal and illegal.

Billy Corben’s documentary, The Cocaine Cowboys, portrays this relationship of drugs with the transformation of Miami into one populated by characters like Tony Montana in Scarface, or in some Martin Scorsese films; that world of cocaine-addicted gangsters, who roam among bankers, real-estate businesses and Cubans transplanted to gringo soil in order to conspire against the life of Fidel Castro and besieged Cuba.

A region of great influence in the United States, Florida brings together some social groups with a vocation for power that shapes the political ecosystem in the different governmental, judicial and legislative institutions, not only in the state but also at the federal level. Cubans residing in the south, near the island of Cuba, form a participatory mass in political life in such a way that the anti-Castro lobby took Congress by storm, with strong support from the intelligence and security agencies (CIA, FBI).

Above all, the middle classes of Cuba and other Caribbean and Latin American countries such as Puerto Rico, Colombia and Venezuela, more recently, have taken South Florida by the neck. According to academic Guillermo Grenier, currently 25% of the businesses in the state are owned by Latin American immigrants.

Although there has always been high economic and political participation by “Latinos” in that state, Venezuelans are the ones who are providing talking points for “the diaspora,” and are the main signal-callers from this center of  (anti)political conspiracy.

FROM WHERE “VENEZUELANS” SEND OTHERS TO KILL
Nor is this conspiranoia, because even the Colombian journalist Gerardo Reyes, from Univisión, admits that ” Miami has lived off political conspiracies,” and says that certain of the characters who live in that city participated in the 2002 coup against President Hugo Chávez.

Many journalists have confirmed this version. Miami is a city where the most diverse groups of Latin American gangsters have conspired to make attempts on the lives of presidents, high-ranking politicians and other characters who threaten their interests, whether on US soil or in their countries of origin. The most recognized terrorists in Latino life in Florida have been protected by the local establishment, including Luis Posada Carriles and Orlando Bosch.

The aforementioned Reyes, providing estimates unrelated to the revolutionary leaders of Cuba and Venezuela, guesses that “Miami had proportionally more CIA collaborators per inhabitant than any other part of the United States, including Virginia.”

In relation to Venezuela, strictly speaking, the Venezuelans living there are usually the most belligerent with respect to the presidents Hugo Chávez, in the past, and Nicolás Maduro at the moment. Some for ideological reasons, others for having committed crimes that led to their “political persecution” by the Bolivarian Government.

Bankers and corrupt Venezuelans coexist in Miami, those who embezzled from Venezuela to use the profits against the stability of the country. Eligio Cedeño is one of those financial actors who fled to South Florida, along with nine other bankers, after a scam concocted through their banks where they stole money that had been faithfully deposited into savings accounts.

Nelson Mezerhane’s also on this list, who similarly bilked depositors with his Banco Federal “bankruptcy”. And so are at least twenty bankers in Miami under the pretext of alleged “political asylum.”

They are joined by an important lobby in the US Congress of associations, NGOs, and groups of Venezuelan exiles in Miami who call for an intervention against Venezuela. This reveals the ancestry of Venezuelans in Florida politics .

Ernesto Ackerman, president of the Venezuelan-American Independent Citizens (IVAC), a group that advocates for greater aggression against their Venezuelan homeland, is also president of the Miami-Dade Latin American Republican Club, and a volunteer of the campaigns of Senator Marco Rubio.

Just as Ackerman is embedded in the brokerage of the Florida political establishment, the other bankers also do the same from the financial front. Its tentacles are usually centered around the city of Doral, or Doralzuela as some call it, a kind of Venezuelan branch of Miami.

By 2010 alone, Venezuelans represented 20.6% of Doral’s population, surpassing any other national group, including white gringos. That city is also home to Florida’s largest company, World Fuel Services, which deals in energy products. Likewise, Doral is the headquarters of media outlets The Miami Herald, El Nuevo Herald and Doral News, which often attack Venezuela.

In Weston (or Westonzuela), Florida’s Beverly Hills, according to 2010 Census figures, 6,360 Venezuelans now live, tripling the 2002 figure. Pembroke Pines (with 40% Latinos among its population) and Miramar (37%) are other ideal places for Venezuelans of the wealthiest middle class (and upwards) to reside and invest in businesses.

However, Miami, which dances to the rhythm of conspiracies, is the favorite place of political influence for those who resent the Bolivarian Revolution, specifically against President Nicolás Maduro in recent years. Jaime Bayly airs his blatanly pro-assassination TV show from that city.

ANTI-VENEZUELAN POLITICAL CONNECTIONS
The most important thing for the political machinery to carry out its aggression, with the support of Venezuelans “in exile,” is the personnel in Florida who are well entrenched in the US establishment.

In that state, the republican hegemony is not hidden. Partisan control in Florida is known as a trifecta, as the Republican Party maintains power in the governorship, the Senate, and the lower house of Congress.

Most Republican voters are in areas where Latin Americans live. Tampa, Orlando and Miami provide the largest number of votes, although this does not always respond to an inviolable hegemony over time. Florida is considered a swing state, that is, one in which, at election time, it is often debated between the reigning bipartisanship in the United States (between Republicans and Democrats).

It should be remembered that the role of the Republican Party in belligerence against Latin Caribbean revolutions such as the Cuban, the Sandinista—Oliver North , who devised the financing plan for the Nicaraguan Contra through drug trafficking, tried to become a senator for the Republicans—and now the Venezuelan one.

Since Chávez became president of Venezuela, Florida has had governors openly against the Bolivarian Revolution. Jeb Bush , brother and son of former US presidents, members of the Texas oil oligarchy, was governor of Florida from 1999 to 2007 and has connections to Venezuelan crude since the 1980s.

Similarly, Rick Scott, former governor of the state, who reached the top of the Senate in 2018, at least from a budget point of view, is one of the promoters of the blockade against Venezuela. Between energy lobbies and interests the threads of interventionist politics are woven.

But it is Marco Rubio (Republican), from a narco family, who has paradoxically become the number one enemy of Venezuela, a faithful son of Miami, and its neoliberal expression.

All of these actors play an active role in the US attacks against Venezuela, possessor of the largest oil reserves in the world. Added to this are the military threats that have crept into Washington’s legislative halls.

Although party affiliation has played a crucial role for the Trump Administration to take action in overthrowing the government of Nicolás Maduro, the political composition of its main paralegal power agents, be they financial, drug traffickers or media—living from the 1950s to the present day in and around Miami—significantly shape the agenda of “regime change” against Venezuela.

It’s not an exaggeration to say—as the Venezuelan president himself has denounced—that the plotting of conspiracy, not only of assassination attempts, but of other belligerent actions against the leaders of Chavismo and Venezuelans in general, has as its point of origin the south of Florida. It is one of the fundamental axes of aggression in the United States, far more influential than the opinions of a Washington official or a New York stockbroker.