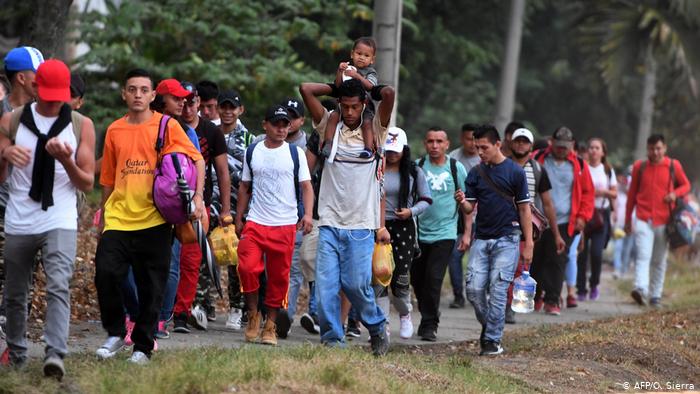 The dream of a better life is stronger than the walls and the danger of death. For the Central American elites, “the export of poverty is a business model,” says Sandra Weiss from Honduras.

Angel Eric Brandon has tried four times to reach the United States. Once he was captured by the Mexican immigration authorities, he was once again abducted by the Zetas drug cartel, and the last two times it was the US border guards who intercepted the 25-year-old from Honduras and deported him. Angel Eric Brandon tells all this as if it were the most normal thing in the world. About the months of jail before deportation, the incarceration in cold cells, the coyotes that earn extra income and sell women who have been entrusted to criminal cartels for forced prostitution. Or about migrants who fall off the freight train that cuts their legs or arms. Brandon has also crossed the Rio Grande twice. “Sometimes it has dangerous currents,” he says. ”

On top of that, all this costs as much as a trip on a cruise. His family had to pay $10,000 to a coyote for the last attempt. There is no guarantee of success. “Meanwhile, the price has risen to $12,000,” says Brandon, “because now Mexico has militarized the border, and coyotes are needed to cross the border between Guatemala and Mexico.” In the past, this was the easiest part: for a few dollars, migrants could go to one of the rafts that transported people as well as drugs or contraband goods to the other side of the river. Now, Brandon is working again in Tegucigalpa, repairing escalators and elevators, until the family saves the money for the next attempt.

RELATED CONTENT: Image Causing Outrage Around the World: a Salvadoran Migrant and his Baby Die Embracing Each Other Trying to Reach the US

How can this situation be endured? Brandon smiles at a question whose answer is obvious to him. “I want a better life”. In other words, a salary with which not to die of hunger, but with which you can buy a house, a motorcycle and a mobile phone. A permanent job with social services, so you do not have to buy analgesics or other necessary material for an operation in the public health system. And for another reason more that can not be paid with money: family reunification. Brandon’s mother and sisters have been in the United States for some time now. Brandon misses them a lot.

“Those who decide to go to the United States are not deterred by the walls of Trump or by ferocious anti-immigration campaigns,” says Liliana Flores, referring to the radio and television spaces that the Honduran government is transmitting and which are financed with money from the United States. Liliana Flores runs a program funded by the Honduran Council for Private Enterprise (Cohep) that teaches young people with few resources the basics of doing business, and then provides them with an initial loan to set up their own. 450,000 young people have already done it. It is a drop in the ocean. And sometimes a fight against windmills. Together with external consultants and a private university, Cohep established a dual training course for automobile mechanics. But the state authority responsible for approval rejected the initiative. “What do we need it for?”, Flores heard once.

Honduras is a young country: 43 percent of its inhabitants are under the age of 19, and every year, hundreds of thousands of people enter the precarious labor market of an economy that has little more to offer than cheap jobs in agriculture, the services or the manufacturing industry. An economy in which a small elite forms oligopolies – in construction or in the energy industry – that live on government contracts, and in which corruption is widespread. National agriculture can not compete with agricultural exports subsidized by the United States, which enter the country free of taxes thanks to a free trade agreement. The rich live off their benefits; the poor of the remittances sent by their emigrated relatives. Only a small middle class survives between them. Hondurans abroad send more than four billion dollars a year to their families in Honduras. Money that banks and elite shopping centers benefit from, and that is not going to stop promoting education or investing. The export of poverty is, as the author Juan Ramón Martínez calls this model, also a “business model”. What can happen when that migration valve is closed can be observed now, not only in Honduras, but in all the countries between Guatemala and Nicaragua. Social pressure becomes uncontrollable.