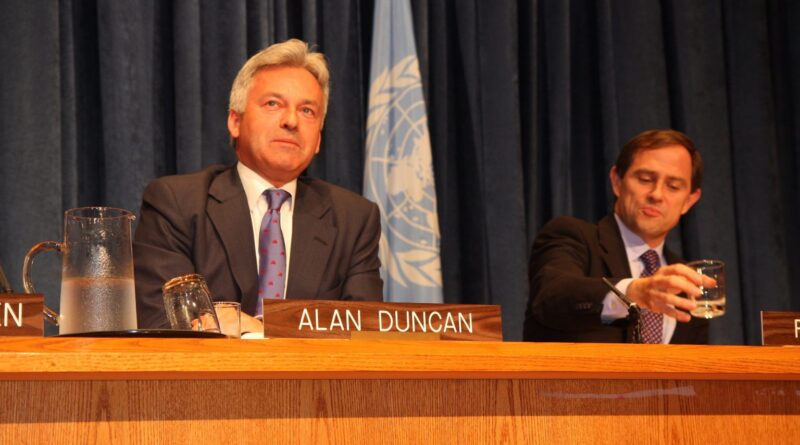 Sir Alan Duncan spoke off-the-record to the head of Vitol, the world’s largest petroleum trader, to “gather information on” Venezuelan oil as he was devising British policy to remove the country’s government.

• Duncan’s conversation with Vitol’s CEO was not logged in public government records and Foreign Office refuses to answer questions about it
• Meanwhile, Vitol tells Declassified it “has no record of conversation”
• As foreign minister from 2016-19, Duncan was “full tilt on Venezuela” and spoke of “need to gear up” UK activity in the country
• Duncan reveals the UK recognised Juan Guaidó as president in 2019 because “we need to use Venezuela as an issue on which we can be as fully in line with the US as possible”
• Duncan admits to providing “political air cover” for the Bank of England’s refusal to give Venezuela the gold it held for them

Alan Duncan, the foreign minister responsible for the Americas from 2016-19, spoke to Vitol’s chief executive Ian Taylor “to gather information on the state of” Venezuela’s oil industry, Declassified can reveal.

The conversation only became public knowledge when Duncan, a former oil trader himself, applied for permission to the UK government to take up a paid role at Vitol after leaving office.

The Foreign Office refused to divulge the date of the conversation, but as minister Duncan was a driving force behind its regime change effort in Venezuela.

In 2019, the UK government recognised opposition leader Juan Guaidó as Venezuela’s president and openly sought the removal of Nicolás Maduro.

The committee which oversees private sector appointments, known by its acronym Acoba, said that the Foreign Office had a record of Taylor “being in touch with” Duncan “to raise an issue concerning Petrocaribe”.

Petrocaribe is an alliance involving 18 Caribbean states in which Venezuela offers the other members oil supplies on concessionary financial terms.

The Foreign Office stated Duncan’s conversation with Taylor “was a political matter and was not related to any specific policy or decisions made.” But this conversation is not referenced in Duncan’s recently published diaries and does not appear in public government records.

The Foreign Office would not divulge what “political matter” Taylor raised, but with Venezuela boasting the largest proven oil reserves in the world, the political situation was of interest to Vitol.

Duncan told Declassified: “This [political matter] is likely to have been to gather information on the state of the country’s oil industry and its exports, given the chaos in Venezuela at this time.” Meanwhile, Vitol told us it “has no record of this conversation”.

Duncan was a strong opponent of the left-wing government under Maduro and in his role as Americas minister was closely involved in devising the UK government’s Venezuela policy.

While Duncan was minister, Vitol’s ability to offer Venezuelan oil to refiners had been hit by US sanctions against the Maduro government, giving the company an incentive to see the installation of a pro-US government.

Ian Taylor, who died in 2020, had long been a large donor to the Conservative Party, giving £600,000 in 2015 alone. Duncan, as shadow leader of the House of Commons, personally received a donation from Taylor to “support” his office in 2008.

Declassified recently found Duncan met with Taylor five times while a minister, but Duncan told us nothing related to politics had been discussed in these meetings.

In 2011, prime minister David Cameron had put Duncan in charge of a “secret oil cell” intended to block oil sales from Gaddafi’s Libya to bring about regime change in the country.

“I’m full tilt on Venezuela”, he noted in January 2019, adding “we need to gear up” UK activity in the South American country.

Earlier this year, Declassified revealed that the UK Foreign Office had in 2019 begun a £450,000 aid project which set up an anti-government coalition in Venezuela.

Duncan also appears to have been the key UK political figure behind encouraging the Bank of England to controversially not release to Venezuela the gold it holds for it.

In his diaries, then minister Duncan reported a phone call in January 2019 with Mark Carney, then governor of the Bank of England, on the issue of Venezuela. “They hold bullion which is now worth about $2 billion. Maduro has asked for it back, but the Bank are hesitating, quite sensibly”, Duncan wrote.

He added: “I tell Carney that I fully appreciate that, although it’s a decision for the Bank, he needs a measure of political air cover from us. I tell him I will write him the most robust letter I can get through the [Foreign Office] lawyers, and it will outline the growing doubts over Maduro’s legitimacy and explain that many countries no longer consider him to be the country’s President.”

Duncan concluded: “A Marc Rich oil trader [Duncan] knows how to do business with a Goldman Sachs banker [Carney].”

Days later, Duncan wrote he was “cheered up in the lobby” by Conservative MP Matt Hancock who had just had dinner with Mark Carney.

“My God, he loves you. He was effusive. He said he’d been trying to get through to the [Foreign Office] for ages about the Venezuelan gold, and one quick phone call with Alan Duncan fixed it in a trice”, Hancock was reported as saying.

Duncan then talked to foreign secretary Jeremy Hunt who was just back from Washington DC. “He confides that we need to use Venezuela as an issue on which we can be as fully in line with the US as possible, because he is out of line on a number of other issues such as Syria”, Duncan noted.

“It’s one of those trade-off moments, which we need if we are to handle the Trump administration. Cleverly.”

Duncan wrote in February 2019 that current UK activity in Venezuela “comprising two humanitarian advisers and aid through multilateral organisations looks too flimsy; this is a Global Britain moment; it needs to be part of our broader policy in the continent”, adding, “we need to gear up”.

He had told the Acoba committee he “made no decisions affecting the oil sector” outside of the Falklands while he was foreign minister. According to his diaries, in 2017 Duncan met with Mounir Bouaziz, vice-president of Shell, alongside the UK ambassador to Venezuela to discuss the situation in the country.

After the meeting, Duncan wrote: “The country is falling to bits, all thanks to Maduro’s idiotic left-wing government.”

Duncan, then minister of state for the Americas, told parliament in 2018: “Maduro’s double crime is that his destruction of the economy has been followed by the systemic undermining of democracy.”

He added: “The revival of the oil industry [in Venezuela] will be an essential element in any recovery, and I can imagine that British companies like Shell and BP will want to be part of it.”

BP
The approval from Acoba notes that Duncan told the committee he “did have reason to meet with BP whilst in office, but this was not in relation to its commercial oil business.”

But in his diaries, just before he was made a minister, Duncan wrote of an “interesting approach from BP on Kurdistan” in Iraq, during a trip to Oman.

“They want to increase their production of Kirkuk crude, but the only way to market it is through the Kurds themselves, as BP do not want to alienate Baghdad. They are asking me to help them place it with a third party, through whom they could market as much as an extra 200,000-250,000 barrels a day within a year,” he wrote.

Duncan told Declassified he did not take up the approach. “I did not have any commercial dealings with BP”, he said.

Later that year, now a minister, he had dinner with George Robertson and Mark Allen, “a lord and a knight, both now of BP”.

Then in September 2017, minister Duncan reported that he took “the BP plane” to Baku, the capital of Azerbaijan. The next day Duncan attended “the massive BP contract-signing ceremony” for a new oil project in the country.

“Their CEO Bob Dudley is very pleased I am there to represent the British government at this enormous oil production sharing and pipeline adventure”, Duncan noted.

Duncan told Declassified: “As the Minister responsible for this area, I was there solely to show government support for BP’s investment in Azerbaijan, not for any other purpose.”

Fujairah
Duncan also had a relationship with Vitol prior to becoming a foreign minister. In January 2016, between ministerial posts, Duncan was approved by Acoba to take up a job as the non-executive director of Fujairah’s oil refining company, which is majority-owned by Vitol.

Fujairah is one of the seven emirates that make up the United Arab Emirates (UAE), a repressive Gulf regime that is a close ally of Britain. The refining company paid Duncan £8,000 a month for the role.

Duncan had also served as minister for international development from 2010-14.

When approving the Fujairah appointment in 2016, Acoba noted that Vitol’s charitable foundation had donated money via the Department for International Development for disaster relief while Duncan was the minister in charge of the department.

Acoba also noted that Duncan “had some contact” with Vitol while in post and had carried out  work for Vitol “prior to becoming a minister” in 2010. Duncan was appointed a non-executive director of Arawak Energy, an off-shoot of Vitol, in 2008.

Duncan’s diaries noted that two months after Acoba’s 2016 approval, he was in the emirate “wearing my Fujairah refinery Chairman’s hat”. He added: “In Fujairah I see the ruler, who I’ve met before. Cheerful chat in which I remind him that his son worked as an intern in my office.”

Duncan continued on the same day: “If, as I nearly did, I’d joined Vitol in 1988 when I left pioneering oil trader Marc Rich I’d have many tens of millions in the bank, as they’ve become the world’s top oil traders. But who cares? Politics beckoned.”

Asked for further details of the conversation it flagged with Acoba, the Foreign Office refused to provide an on the record comment or any further background information.