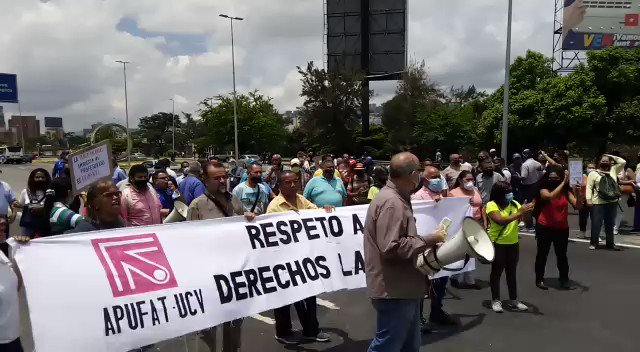 A recent micro-protest near Plaza Venezuela in Caracas blocking traffic on a main highway. Photo: Twitter/@ElPitazoTV.

This Thursday, May 12, the Venezuelan Minister for University Education, Tibisay Lucena, pointed out that the salaries of university employees are currently being paid without delay. She also noted that some wage scales have improved between 150% and 300%, compared to the year 2021.

In recent weeks, right-wing groups, including micro-Trotskyist and communist organizations, in close collaboration with extreme-right elements, have been trying to heat up the streets, organizing protests on the grounds that previously agreed upon bonuses had not been fully paid. These bonuses are based on the percentage of workers’ salaries, which recently increased. Yet these elements have calculated that salaries should increase 500% to 700%, when in reality the improvement in economic indicators is not enough to support salary increases of that magnitude.

“It is undeniable that the wages of the entire university sector were favored with this program to strengthen salaries that President Maduro carried out,” highlighted Lucena, who is also the dean at the National Experimental University of the Arts (Unearte), in an interview with the Union Radio network.

On the other hand, Lucena specified that, beyond some dissenters from the unions, today “there is no problem in this regard.” The official also pointed out that the salary payment instructions are being evaluated by her office, so that each university can adapt to it.

She insisted that the objective is to overcome the contradictions that have arisen in this area. “The important thing is that this wage and salary strengthening program has been effective and is objective,” she said.

The minister also indicated that, although some universities continue to teach remotely, almost 100% of the study centers have returned to face-to-face classes. “Most of the classes at this time are in person. Right now, I think we’re pretty much at 100%,” she said.

Most of right-wing organized protests have been very small and have not reached their objective, which is to replicate the scenes of street unrest that many Venezuelans witnessed in 2017 and 2019. The blocking of streets and highways has been their main tactic, combined with attracting as much media attention as possible. But many in Venezuela are following these events closely, as experience has thought them that these are the first steps that far-right groups take in their attempts to replicate Guarimbas or violent protests.