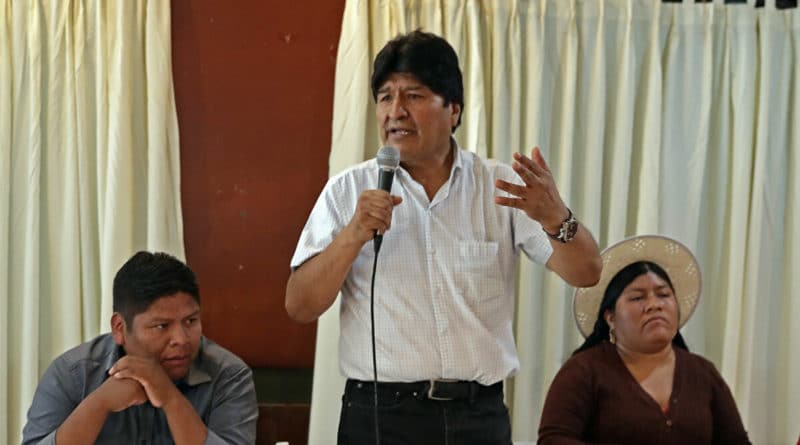 MIT researchers have thrown the Organisation of American States’ (OAS) audit of Bolivia’s October elections into question. According to La Resistencia Bolivian journalist Alberto Echazu, the OAS should be held responsible for the November coup, especially given that the same entity was invited by the de facto government to monitor the 3 May vote.

On 27 February, John Curiel and Jack R. Williams from the Massachusetts Institute of Technology (MIT) published an op-ed in The Washington Post revealing that the Organisation of American States’ (OAS) statistical analysis and conclusions about the Bolivian October election’s “fraud” appear to be “deeply flawed”.

In response, the OAS denounced the report as “neither honest, nor fact-based nor comprehensive” and stated that it stood by its findings.

Back in October 2019, the OAS’ preliminary audit of the voting in Bolivia became the trigger for the nation-wide unrest which subsequently led to the ousting of the country’s President Evo Morales, the persecution of members of his Movement Towards Socialism (MAS) party and violence resulting in loss of life.

“[The MIT] study is just one in a series of studies by researchers from around the world that found the OAS report flawed and just an excuse to back the coup that was already in progress,” says Alberto Echazu, a political analyst and journalist with La Resistencia Bolivia. “All of them, including a large number of academics and intellectuals, have stated that there is no evidence to support the fraud storyline.”

Indeed, on 22 October 2019 the Washington DC-based Center for Economic and Policy Research (CEPR) released a statement outlining the flaws in the OAS audit on the heels of the election drama. The think tank continued to raise the alarm over the OAS’ data and methods in November and later commissioned MIT Election Data and Science Lab researchers to independently verify the numerical and statistical results of CEPR’s final study.

Apart from this, on 2 December, The Guardian published a letter signed by 98 economists and researchers who called upon the OAS “to retract its misleading statements about the election, which have contributed to the political conflict.”

Among other matters, the statisticians draw attention to the fact that the OAS released a fallacious press release on 21 October which claimed that there had been a “drastic and hard-to-explain change in the trend of the preliminary results.” The entity – that is partially funded by the US – referred to a pause in the “quick count”: with 84% of the votes tallied up, Morales led with 7.9% points; after a break, with 95% ballots counted, his margin mounted over 10%. The researchers elaborate that this change was “neither ‘drastic’ nor ‘hard to explain'”, concluding that Morales did win in October.

“For any common person familiar with Bolivia’s history and territorial configuration, it is general knowledge that the voting from rural areas comes in significantly later, as they are located far away from capital cities, and these are the regions where MAS has almost absolute support,” explains Echazu.”This alone would negate the idea that there was a change in the trend after the preliminary count was halted. In that regard, the studies just confirm technically what common sense and general knowledge would dictate.”

The journalist reveals that “MAS is going to demand that the OAS answer for the violations against human rights and assassinations that took place after its report was published, making the OAS and its General Secretary, Luis Almagro, responsible for the coup and the establishment of a de facto government.”

He notes that the de facto Anez government is trying to discredit and mute the latest study by MIT by groundlessly claiming that it was conducted at the request of Morales supporters.

How La Paz is Disrupting the MAS Campaign
At the same time, La Paz is continuing to throw sand in the MAS gears ahead of the 3 May elections, the journalist highlights. In late February Bolivia’s supreme electoral tribunal disqualified Evo Morales, who was granted political asylum in Argentina, from running for Senate because he no longer met residency requirements.

Speaking to Reuters in early March, the former Bolivian president lambasted La Paz and their alleged US backers for preventing him from running for the presidency and Senate. Having said that he has no doubts that MAS would come out on top again, he voiced serious concerns about the forthcoming 3 May vote arranged by the country’s political right with OAS and USAID assistance, presuming that it could be fraudulent or followed by a coup.

These are Bolivian MAS supporters, arriving for a rally in Chuquisaca.

Demographically (class, ethnicity, culture), this march is the exact opposite of the protests against Evo before the coup. pic.twitter.com/PDRLBWtQii

Echazu outlines a series of measures taken by the de facto government which were aimed at disrupting the left-leaning party’s campaign.

“First, there is an attempt to proscribe MAS’ candidates”, he says. “The de facto government has already started a campaign to find a cause, any one would do, to nullify Luis Arce’s presidential candidacy. There is no case against him, so it will take an illegal action to keep him off the ballot.”

Arce remains by far the strongest candidate in the presidential race, according to the recent polls, with the facto interim president Jeanine Anez and Carlos Mesa tied in second place.

“The de facto regime is very well aware of Arce’s strength, so an action to challenge his candidacy, probably in the final days of the electoral campaign, is to be expected,” the journalist warns.

The urban area of this region (Sucre) is a hotbed of racism and discrimination. But the rural workers here back the MAS. pic.twitter.com/YqPz7TTIrI

Second, there is a media blockade imposed by La Paz, according to Echazu:

No MAS demonstrations and rallies are being covered by the government-controlled media.

· Information about the November could is silenced.

· Studies demonstrating the absence of fraud in the last election by researchers and institutions are suppressed.

· Condemnations of human rights violations in Bolivia by the de facto government issued by international institutions are censored.

· Little if any news emerge in the media about Morales and demonstrations in his favour have been held around the world during his exile in Argentina, according to the journalist.

“This, of course, affects the [MAS] campaign, as the regime is trying to show a peaceful country, where everything is fine and the only people that oppose the ‘transitional government’ are the delinquent fanatics who are MAS supporters,” he emphasises.

Third, the de facto government demonstrates its intent to prevent MAS from mobilising and holding demonstrations ahead of the elections, the journalist points out.

“It is the case of the tropics area of Cochabamba, where the federations of coca leaf producers are located, a symbolic stronghold of MAS,” he explains. “The de facto government has threatened them with calling off the election in that region if they march into the capital city of Cochabamba, this is, not allowing them to vote.”

Finally, [there are] attacks and persecution against alternative media, including La Resistencia Bolivia, Echazu highlights.

Bolivian press worker Rene Esteban Guarachi denounces his arrest and beating by Añez regime forces in El Alto, for his crime of covering police repression on Thursday in Senkata. (1 of 3) pic.twitter.com/ESz3Vj4kfn

“[The government says] we are seditious and cyber-terrorists, so we can expect to be put in jail at any given moment if we maintain our anti-government editorial line and with our coverage of the repression, as it is happening while I am writing these words, the repression against citizens of El Alto has a new chapter and a journalist that was at the scene was arrested,” he emphasises.