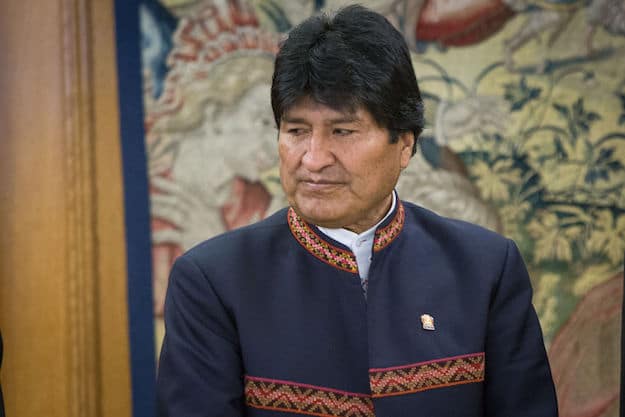 Evo Morales affirms that the Áñez government shows submission to the Trump Administration by inviting the Venezuelan coup leader Guaidó to the inauguration of Arce in Bolivia.

“The invitation by the Foreign Ministry of the de facto government of Bolivia to the self-proclaimed Juan Guaidó for the inauguration ceremony of the elected authorities is an aggression against the people and democracy, and is also an act of submission to [the president of the United States, Donald] Trump,” former Bolivian president Evo Morales wrote on his Twitter account on Saturday.

This pronouncement comes after learning that the de facto government, led by Jeanine Áñez in Bolivia, invited Guaidó, self-proclaimed “interim president” of Venezuela, to the inauguration of the elected Bolivian president, Luis Arce, and decided not to extend invitations to Morales or the legitimate president of Venezuela, Nicolás Maduro .

According to the note from the Ministry of Foreign Relations of the Bolivian de facto government, Guaidó’s presence “will further strengthen the traditional ties between Venezuela and Bolivia,” a position that differs from that of the Movement for Socialism (MAS), Arce’s party, which recognizes Maduro as president of the Bolivarian country.

However, Evo Morales announced on Friday that his return to Bolivia is scheduled for November 11, coinciding with the first anniversary of his departure from the country, but clarified that he does not intend to be part of the future government and that he will limit itself to promoting social movements and “taking care of the ideological principles” of the MAS.

RELATED CONTENT: US Media Lie About Bolivia’s Movement Toward Socialism—Before, During and After Election

“The United States and the Bolivian right don’t want me to return to Bolivia ever again. They opposed my being in Argentina, and they opposed my move to the border, but I have the right, like any compatriot, to return to my land,” said the indigenous leader.

Morales resigned on November 10, 2019 to prevent violent acts from taking place in the country, and Áñez took advantage of this situation to proclaim herself interim president of Bolivia. Immediately, the de facto president broke relations with Venezuela and excluded Bolivia from the Bolivarian Alliance for the Peoples of Our America (ALBA).

However, Arce, proclaimed the winner of the general elections on October 18 in Bolivia, with a large majority of 55.1% of the votes, has already announced that his government will resume relations with Venezuela and Cuba.