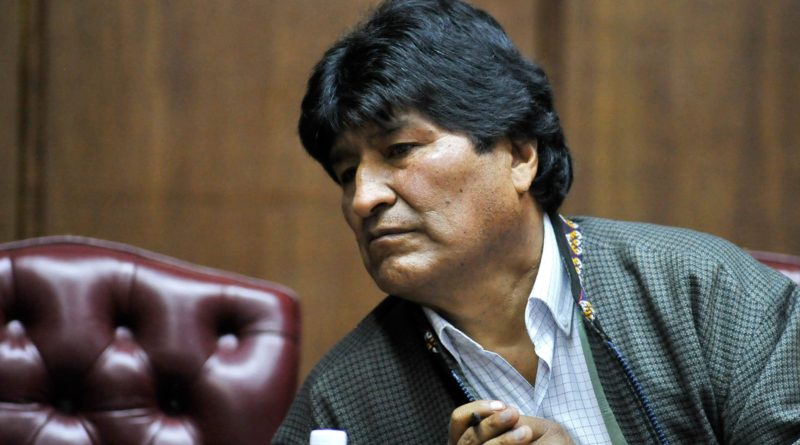 Bolivia’s democratically elected president, Evo Morales, became the most recent victim of a U.S.-approved Latin American coup when, at the “suggestion” of the chief commander of the Bolivian armed forces, Williams Kaliman, Morales fled for his life to asylum in Mexico.

General Kaliman’s ties to the U.S. are not thin. Though seldom glanced at in the U.S. press, Kaliman was Bolivia’s military attaché to Washington from 2013 to 2016, during which time he may have developed deep ties to both the U.S. military and intelligence communities. And his ties to the U.S. go back even earlier than that: In 2004, Kaliman studied at the infamous School of the Americas (now rebranded as the Western Hemisphere Institute for Security Cooperation), the military school notorious in Latin America for graduating coup leaders and dictators. After that, he attended again and took a course in 2013. Several other key players in the coup were also graduates of the School of the Americas.

As in other Latin American coups and attempted coups, the U.S. was quick to recognize and legitimize the coup government. The Trump White House applauded the coup as “a significant moment in democracy.”

U.S. Involvement in Bolivian Coups
The 2019 Bolivian coup cannot be properly understood ripped from its context. It is not the first Bolivian coup, and it is not the first U.S.-supported Bolivian coup. Since independence from Spain, Bolivia has had approximately 185 changes in government, and most of those changes — according to William Blum’s book, Killing Hope: U.S. Military and CIA Interventions Since World War II — were coups.

In Legacy of Ashes: The History of the CIA, Tim Weiner says that at an August 15, 1962, meeting at the White House, President John F. Kennedy was given a document that listed 11 countries in which covert actions were underway. Bolivia was on the list. According to Weiner, then-CIA Director John McCone told Kennedy that the document “was highly classified because it tells all about the dirty tricks.”

In the Bolivian elections of August 1963, according to CIA expert John Prados in his book, Safe for Democracy: The Secret Wars of the CIA, the U.S. approved secret funds to influence the Bolivian elections and oppose the leftist candidate, Victor Paz Estenssoro. Between 1963 and 1965, those CIA funds amounted to $1.2 million. But it wasn’t enough, and Paz came to office. By 1964, the CIA and the Pentagon wanted Paz out. And in November of that year, they got their wish. But the U.S. did more than wish.

Since independence from Spain, Bolivia has had approximately 185 changes in government, and most of those changes were coups.

Paz was removed in a military coup led by Gen. René Barrientos Ortuño, his vice president. Like General Kaliman, Barrientos received training in the U.S. The Bolivian army was constructed under U.S. guidance, and its officers were trained in the U.S. and at the School of the Americas. By the time of the 1964 coup, according to Blum, 1,200 soldiers had trained either in the U.S. or at the School of the Americas, including 20 of 23 senior officers.

After the coup, the U.S. approved more cash to support Barrientos. According to Prados’s Safe for Democracy, Barrientos knew the cash was coming from the CIA. Despite Barrientos’s cancelling elections, more U.S. money would come to him in 1964 and 1965.

Paz was brought into the U.S.’s sights for several reasons: at various times, he opposed the U.S. on its Cuba policies, and solicited the Soviet Union and Czechoslovakia for aid. He also refused to use the military to get control over the strongly independent and economically and politically powerful tin miners. One of Barrientos’s first actions as president would be to brutally bring the tin miners under control.

This pattern, too, is familiar. Morales too was targeted in part because of his refusal to give away Bolivia’s natural gas and mining wealth. For Morales, the mining was not for tin but for lithium. Lithium has become crucial for the batteries that power electric cars. And Bolivia may have as much as 70 percent of the world’s lithium reserves. Morales wanted the wealth from that natural resource to go into improving the lives of the Bolivian people. And that didn’t sit well with the international corporations that wanted unfettered access to Bolivia’s lithium.

Morales mandated that all mining of Bolivia’s lithium had to be done in equal partnership with Bolivia’s national mining company and Bolivia’s national lithium company. On November 4, 2019, listening to the pleas and protests of the people of the region, Morales cancelled a lithium mining contract with Germany’s ACI Systems. Days later, Morales, like Paz, was out, and the U.S.-friendly military was in.

U.S. aid did not end with the overthrow of the Paz government. According to Blum’s Killing Hope, Secretary of Defense Robert McNamara would inform Congress in February 1966, while briefing them on the mining situation and the violence in the streets of Bolivia, that the U.S. was “assisting this country to improve the training and equipping of its military forces.”

As Blum details, that same year, when elections would finally be held by Barrientos, the CIA gave $600,000 to his campaign, according to Antonio Arguedas, his minister of the interior, who was a CIA agent.

Blum reports that later, the Gulf Oil company would admit that at the urging of the CIA, it, too, would contribute an additional $460,000 between 1966 and 1969 to Bolivian officials, especially Barrientos. In return, as expected, Barrientos would rip Bolivia open to the multinationals, especially Gulf Oil.

1971 saw socialist Gen. Juan José Torres occupying the seat of the Bolivian president. To the U.S.’s dismay, he was friendly with socialist leaders Salvador Allende in Chile and with Fidel Castro in Cuba, he increased ties to the Soviet Union and he (not unlike Morales) nationalized Bolivia’s mines.

The first attempt at a coup in 1971 to remove Torres failed. It was carried out by Col. Hugo Banzer, who had close ties to the U.S. military, attended the School of the Americas, trained at Ford Hood in Texas and served as Bolivia’s military attaché to Washington — the familiar pattern.

The CIA knew of Banzer’s coup plans and had informed Washington. According to Blum, while planning his second coup attempt, Banzer was in close contact with U.S. army advisers in Bolivia. In August 1971, Banzer succeeded and was “installed,” international relations scholar Stephen Zunes has said, “in a U.S.-backed coup.”

According to reporting by The Washington Post at the time, the U.S. Air Force provided its radio system to the coup plotters to ensure their communications. The San Francisco Chronicle reported on September 1, 1971, that CIA money, training and advice was made available to Banzer and the coup plotters.

Now in power in Bolivia, Banzer would improve ties with the U.S. As the current Bolivian coup government would immediately sever ties with Venezuela and Cuba, so the Banzer coup government would quickly sever ties with Chile and Cuba. Banzer would also answer American prayers and end nationalization and welcome private foreign investment into Bolivia. Political arrests and torture became common and made all these policies possible.

The Long Bolivian Coup
The Bolivian coup also needs to be understood as the final act of a long play. The U.S. did not suddenly decide to remove Morales from power. Embassy cables reveal that the U.S. government has opposed him since he had the audacity to come to power in 2006, and that it has supported a violent opposition against him.

When a coup was first attempted against Morales in 2008, cables had already informed Washington that the opposition expected “that the dialogue will break down,” and that it “predicts more violence after the dialogue fails.” The cable goes on to say that, “Once dialogue breaks down … the opposition … is generally in agreement that the next stage is to blow up gas lines.”

A month later, a cable reveals that the U.S. was fully aware of the possibility of a coup. The cable informs Washington of the opposition’s willingness to prepare “a trap for the government forces which could lead to a bloodbath” and readiness to “develop, with [the U.S. Southern Command Situational Assessment Team], a plan for immediate response in the event of a sudden emergency, i.e., a coup attempt or President Morales’s death.” Cables from the same period also make clear that the U.S. knew from “increasing chatter” about the threat of “assassination or coup.”