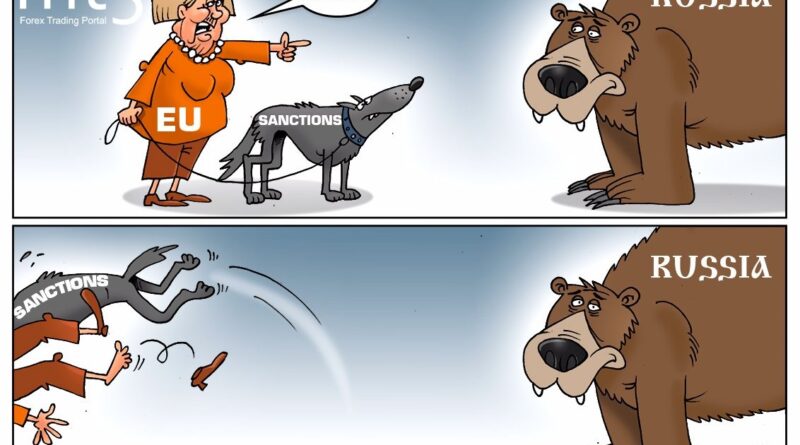 Over the last years the U.S. and its EU puppies have ratcheted up their pressure on Russia. They seem to believe that they can compel Russia to follow their diktat. They can’t. But the illusion that Russia will finally snap, if only a few more sanctions ar applied or a few more houses in Russia’s neighborhood are set on fire, never goes away.

As Gilbert Doctorow describes the situation:

The fires burning at Russia’s borders in the Caucasus are an add-on to the disorder and conflict on its Western border in neighboring Belarus, where fuel is poured on daily by pyromaniacs at the head of the European Union acting surely in concert with Washington.
Yesterday we learned of the decision of the European Council to impose sanctions on President Lukashenko, a nearly unprecedented action when directed against the head of state of a sovereign nation.
…
It is easy enough to see that the real intent of the sanctions is to put pressure on the Kremlin, which is Lukashenko’s guarantor in power, to compound the several other measures being implemented simultaneously in the hope that Putin and his entourage will finally crack and submit to American global hegemony as Europe did long ago.

RELATED CONTENT: “The Emails are Russian” Will be the Narrative, Regardless of Facts or Evidence
…
The anti-Russia full tilt ahead policy outlined above is going on against a background of the U.S. presidential electoral campaigns. The Democrats continue to try to depict Donald Trump as “Putin’s puppy,” as if the President has been kindly to his fellow autocrat while in office. Of course, under the dictates of the Democrat-controlled House and with the complicity of the anti-Russian staff in the State Department, in the Pentagon, American policy towards Russia over the entire period of Trump’s presidency has been one of never ending ratcheting up of military, informational, economic and other pressures in the hope that Vladimir Putin or his entourage would crack. Were it not for the nerves of steel of Mr. Putin and his close advisers, the irresponsible pressure policies outlined above could result in aggressive behavior and risk taking by Russia that would make the Cuban missile crisis look like child’s play.

The U.S. arms industry lobby, in form of the Atlantic Council, confirms the ‘western’ strategy Doctorow describes. It calls for ‘ramping up on Russia’ with even more sanctions:

Key to raising the costs to Russia is a more proactive transatlantic strategy for sanctions against the Russian economy and Putin’s power base, together with other steps to reduce Russian energy leverage and export revenue. A new NATO Russia policy should be pursued in tandem with the European Union (EU), which sets European sanctions policy and faces the same threats from Russian cyberattacks and disinformation. At a minimum, EU sanctions resulting from hostilities in Ukraine should be extended, like the Crimea sanctions, for one year rather than every six months. Better yet, allies and EU members should tighten sanctions further and extend them on an indefinite basis until Russia ends its aggression and takes concrete steps toward de-escalation.
It also wants Europe to pay for weapons in the Ukraine and Georgia:

A more dynamic NATO strategy for Russia should go hand in hand with a more proactive policy toward Ukraine and Georgia in the framework of an enhanced Black Sea strategy. The goal should be to boost both partners’ deterrence capacity and reduce Moscow’s ability to undermine their sovereignty even as NATO membership remains on the back burner for the time being.
As part of this expanded effort, European allies should do more to bolster Ukraine and Georgia’s ground, air, and naval capabilities, complementing the United States’ and Canada’s efforts that began in 2014.

The purpose of the whole campaign against Russia, explains the Atlantic Council author, is to subordinate it to U.S. demands:

Relations between the West and Moscow had begun to deteriorate even before Russia’s watershed invasion of Ukraine, driven principally by Moscow’s fear of the encroachment of Western values and their potential to undermine the Putin regime. With the possibility of a further sixteen years of Putin’s rule, most experts believe relations are likely to remain confrontational for years to come. They argue that the best the United States and its allies can do is manage this competition and discourage aggressive actions from Moscow. However, by pushing back against Russia more forcefully in the near and medium term, allies are more likely to eventually convince Moscow to return to compliance with the rules of the liberal international order and to mutually beneficial cooperation as envisaged under the 1997 NATO-Russia Founding Act.

The ‘rules of the liberal international order’ are of course whatever the U.S. claims they are. They may change at any moment and without notice to whatever new rules are the most convenient for U.S. foreign policy.

But as Doctorow said above, Putin and his advisors stay calm and ignore such trash despite all the hostility expressed against them.

One of Putin’s close advisors is of course Russia’s Foreign Minister Sergei Lavrov. In a wide ranging interview with Russian radio stations he recently touched on many of the issues Doctorow also mentions. With regards to U.S. strategy towards Russia Lavrov diagnoses:

Sergey Lavrov: […] You mentioned in one of your previous questions that no matter what we do, the West will try to hobble and restrain us, and undermine our efforts in the economy, politics, and technology. These are all elements of one approach.
Question: Their national security strategy states that they will do so.

Sergey Lavrov: Of course it does, but it is articulated in a way that decent people can still let go unnoticed, but it is being implemented in a manner that is nothing short of outrageous.

Question: You, too, can articulate things in a way that is different from what you would really like to say, correct?

Sergey Lavrov: It’s the other way round. I can use the language I’m not usually using to get the point across. However, they clearly want to throw us off balance, and not only by direct attacks on Russia in all possible and conceivable spheres by way of unscrupulous competition, illegitimate sanctions and the like, but also by unbalancing the situation near our borders, thus preventing us from focusing on creative activities. Nevertheless, regardless of the human instincts and the temptations to respond in the same vein, I’m convinced that we must abide by international law.

Russia does not accept the fidgety ‘rules of the liberal international order’. Russia sticks to the law which is, in my view, a much stronger position. Yes, international law often gets broken. But as Lavrov said elsewhere, one does not abandon traffic rules only because of road accidents.

Russia stays calm, no matter what outrageous nonsense the U.S. and EU come up with. It can do that because it knows that it not only has moral superiority by sticking to the law but it also has the capability to win a fight. At one point the interviewer even jokes about that:

Question: As we say, if you don’t listen to Lavrov, you will listen to [Defense Minister] Shoigu.
Sergey Lavrov: I did see a T-shirt with that on it. Yes, it’s about that.

Yes, it’s about that. Russia is militarily secure and the ‘west’ knows that. It is one reason for the anti-Russian frenzy. Russia does not need to bother with the unprecedented hostility coming from Brussels and Washington. It can ignore it while taking care of its interests.

As this is so obvious one must ask what the real reason for the anti-Russian pressure campaign is. What do those who argue for it foresee as its endpoint?