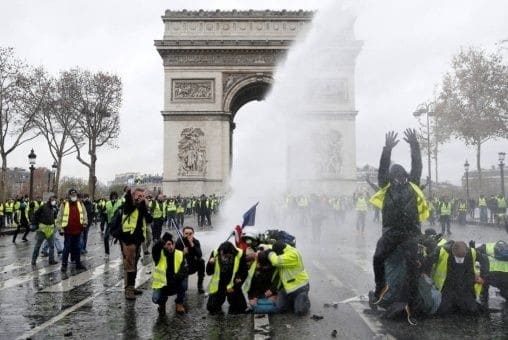 For the sixth consecutive Saturday there have been large concentrations in several cities in France against the policies of President Emmanuel Macron.

French authorities reported Saturday that during the protests by the so-called yellow vests against the direction of the Government of Emmanuel Macron, about 220 people were arrested.

For the sixth consecutive Saturday there are rallies in front of the Château de Versailles (symbol of the French Revolution), on the outskirts of Paris (capital), where local media have reported that at least 140 protesters were arrested so far.

The palace of Versailles (seat of the French Parliament) announced that it will be closed in a “preventive” manner by decision of the Prefecture (Delegation) of Government.

Other actions are planned at several border points in the country, including the one in southeastern France with Spain, near Junquera.

The protests of the yellow vests continue despite the fact that the government permanently suspended fuel taxes, the origin of some mobilizations that quickly became generalized demonstrations.

Since the start of the protests, 2,891 people, including civilians and police, were injured, according to the French Interior Ministry on Friday. Likewise, ten people have lost their lives.