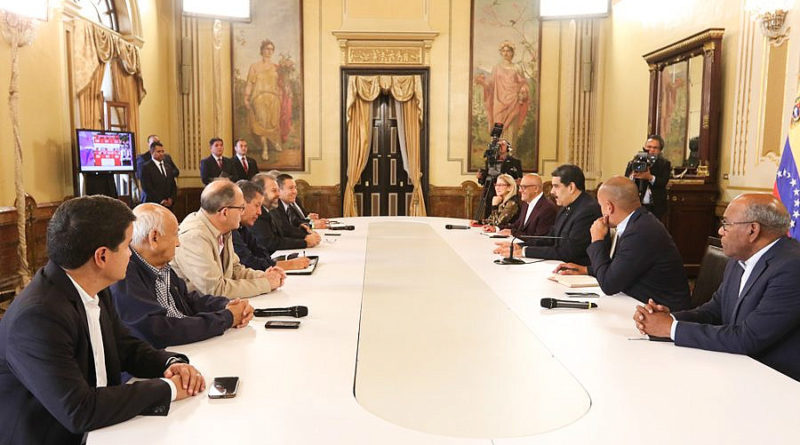 On Monday night Venezuelan President, Nicolás Maduro, received at the Miraflores Palace the members of the National Dialogue Table, with whom he met to evaluate the progress of the agreements reached between the government and the opposition, including the electoral rules and agreement, facing the parliamentary elections that will be held this year in Venezuela.

This was stated by the Minister for Communication and Information, Jorge Rodríguez, after finishing the meeting held in the Simón Bolívar room of the Miraflores Palace, in Caracas.

Rodriguez said that, at the meeting, we entered “into deep matters in terms of electoral guarantees, in terms of the representation of indigenous peoples and the need for a deeper participation of our ancestors in the National Assembly.”

He highlighted the actions that are being taken in the National Assembly to elect the new members of the National Electoral Council (CNE) as agreed in the National Dialogue Table last September. These actions will allow “clear electoral rules and guarantees to be established”, so that “we can participate in the next parliamentary elections” in peace. “This is so that we do not resort to unchallenged shouts, to calls for violence, to try to hinder what is a mandate of all those who call ourselves democrats,” said the socialist leader.

Recently, the “Bloque de la Patria” (Chavista AN bench) and members of the AN approved the creation of a commission to designate the new members of the Electoral Power. During the meeting, in addition, the six points agreed upon last September were reviewed, when the Dialogue Table was installed in the Yellow House. The conclusions of this day, stressed the minister, will be announced shortly, as he said that this Monday’s event shows “respect for the elementary norms of democratic coexistence, for respect for the sovereignty of the Bolivarian Republic of Venezuela”.

They urge AN to expedite selection of the new CNE
On the other hand, the leader Claudio Fermín, spokesman of the opposition and member of Solutions for Venezuela, said that “they have urged the National Assembly to expedite the process of selecting a new National Electoral Council and move towards proportional representation in the legislative body”.

In a radio interview on “Union Radio” the evangelical opposition politician, Javier Bertucci expressed his good expectations on the next steps to be taken by the National Dialogue Table and urgue all political forces in the National Assembly to show commitment to the fatherland and advance in the election and swearing of the commission to designate the new electoral authorities.

Bertucci also mention that disregarding their optimism they know that if there is no agreement by March 20, a decision should be taken and if the opposition deputies do not reach an agreement, the Supreme Court would have to take the step following constitutional rules and increasing the chances for abstention.

Jorge Rodríguez also called on the National Assembly not to impede the process of designating a new national electoral council in the country. “That the CNE is chosen, that it is a process of renewal and that clear rules be established that allow everyone to participate in the parliamentary elections established by the Constitution,” he told the media present.