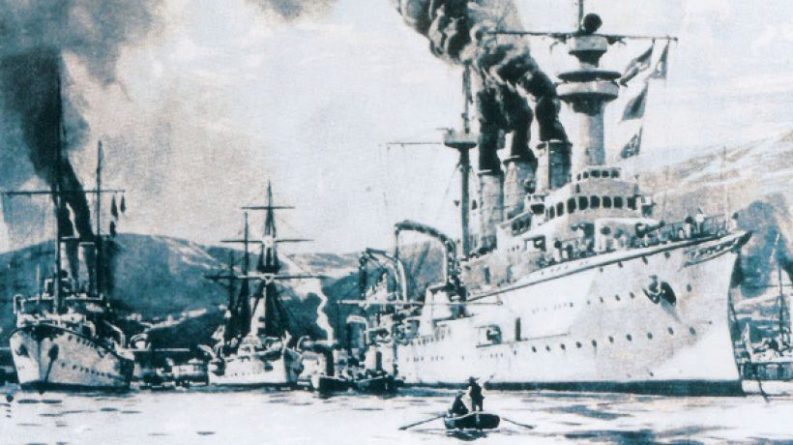 In December of 1902, 20 ships from Germany, England and Italy blocked the exit to the sea of Venezuela as a mechanism of pressure for the government of Cipriano Castro to pay the external debt contracted by previous governments.

The transgression was extended until February 1903, when the United States intervened on the scene to serve as a “mediator” between the parties and reached an agreement that would dissolve the threat of intervention by foreign powers in Venezuelan territory.

We bring up this part of our history in light of suggestions about a US naval blockade against Venezuela after the failed strategies carried out by the national and international antichavismo to overthrow President Nicolás Maduro and to begin a fratricidal civil war.

WHAT TRIGGERED THE NON-PAYMENT OF THE FOREIGN DEBT?
The beginning of the 20th century received Venezuela with a deep structural crisis. The wars that gave way to the birth of the Republic were followed by decades of constant confrontations between caudillos and civil wars, which did not allow a minimum of political governability.

The economic sector, on the other hand, based exclusively on the export of coffee and, to a lesser extent, cocoa, was vulnerable to the dynamics of the global capitalist market, and the decrease in the prices of raw materials affected the country’s monoproductive structure.

In 1899 the price of coffee had declined by 40% on the international market, while domestic production also declined, which reduced the value of the product by 46%.

In turn, weak fiscal policies combined with poor administration of resources had an impact on the precariousness of the situation. The financing of the wars took a good part of the income, being insufficient to cover the rest of the expenses of the State. In this sense, the request for external financial assistance became recurrent, which was an instrument with which previously acquired debts were honored and resources were injected into the multiple uprisings and revolts of the time unleashed by personal political projects of the caudillos.

The balance of this economic policy was that of a public debt of 190 million bolivars. In 1896, at the end of the government of Joaquín Crespo, this translated into four times the fiscal income of the Republic.

Under these conditions, Cipriano Castro was established in power, after triumphing with the Restorative Liberal Revolution in 1899. He was obliged to meet a debt that exceeded the national income, just when the country had the productive apparatus atrophied by civil wars and coffee prices suffered a sharp drop.

Given this, Castro declared in January 1901 his refusal to pay the bulky loans that had been acquired before his government and in February 1902 suspended the payment of the debt. The situation alerted the creditor powers, which financed regional caudillos in terms of overthrowing the government.

Breaking with the political system servile to foreign interests led to the decision by foreign capital to put together an uprising to depose Cipriano Castro. This is how the Liberating Revolution advanced, led by the banker Manuel Antonio Mato and with the support of the New York & Bermúdez Company, the first transnational company operating in the country to extract hydrocarbons with minimal royalties and taxes for the country.

The operation failed in November 1902 with the triumph of the government in the Battle of La Victoria. The European countries decided, then, to execute the naval blockade on the coasts of the Caribbean Sea.

FROM 1902 TO 1903: CHRONOLOGY OF THE SIEGE ON THE VENEZUELAN COAST
England and Germany gave the ultimatum on December 7, 1902. Two days later a fleet of 15 warships arrived at the port of La Guaira to enforce the blockade. On December 11, Italy joined the aggression. The ports of Puerto Cabello, Maracaibo and La Guaira were attacked. The most violent attack occurred on December 12 at Lake Maracaibo.

New demands from France, Spain, United States, Holland and Belgium joined the original ones of Germany, England and Italy. In addition, the Europeans annexed the claims of damages caused to the goods and businesses of their subordinates during the civil wars.

The response of Cipriano Castro to the undeclared war action was the call for national unity throughout the territory against imperialist aggression. He received solid support from the population, including those who opposed him, reinforcing his leadership internally. For this reason he ordered the return of the exiles and the release of the political prisoners, while he ordered the capture of the English, German and Italian subjects who lived in the country.

The internal support could only crystallize with the end of the siege on the part of the European empires. In this way and in spite of Castro’s certain resistance, on December 17, 1902 the Venezuelan Foreign Ministry requested the intervention of the US Plenipotentiary Minister Herbert Bowen to serve as an arbitrator in the resolution of the conflict.

The foreign powers also accepted the diplomatic measure with suspicion. On February 13, 1903, the “Protocol of Washington” was signed, where the claims were divided into two parts: those acquired before Castro’s government and those corresponding to his administration. Its cancellation would be guaranteed with the 30% section of customs duties.

The total of the commitments acquired with the powers that attacked the sovereignty of the country was paid in 1913.

THE BACKGROUND OF THE NAVAL BLOCKADE INAUGURATES THE POLICY OF THE “BIG STICK”
Locating the geopolitical context of the time is crucial if we want to identify the true motives behind the excessive attack on a sovereign state that presented evident vulnerabilities to settle its external debt.

European hegemony in the new continent staggered with the emergence of the United States as a power. The coincidence of England and Germany (rival countries in the control of the global market) in besieging Venezuela served to measure the US response on that side of the Atlantic.

The manifest interests of the European naval blockade aimed at annexing strategic territories, under the figure of dependencies or protectorates, beyond the simple compliance with the Venezuelan debt. Germany, for example, intended to expand its naval fleet and establish coal bases and stations in different areas of the world map. The island territory of Nueva Esparta was ideal for establishing a naval base in the Caribbean.

It was an opportunity for this and other European powers that were aiming to capture, through military deployments, new markets that avoided the stagnation of their economies.

During the nineteenth century, the United States was responsible for displacing European influence from Latin American soil. In its impulse to become a power, it understood that it was necessary to control the maritime passages that surrounded it as well as to guarantee the influence of its decisions in the peripheral countries. The “stability of the hemisphere” became a matter of national security.

Two parallel events took place in other parts of the regional geography and were closely related to the participation of the United States in the Venezuelan conflict. In 1899, it annexed the islands of Cuba and Puerto Rico to its territory by defeating Spain in the Spanish-American War. At that time, the Philippines and Guam were also under US guardianship.

The other fact was the pact, at the end of 1903, with the newly established Republic of Panama to build the transoceanic canal, immediately after the separation of the Isthmus from Colombia. In this way, the Caribbean waters passed to the American domain. The foreign policy that it drew then was directed to the defense of a strategic region for commerce and naval communication, with special emphasis in the isthmic channel.

With mediation in Venezuela, the United States, led by President Theodore Roosevelt, consecrated the “manifest right” to be an arbitrator in the affairs of Latin American countries. The government of Washington diluted the pretensions on the part of the old continent to collect debts with an occupation of the territory, to the advantage of its own settlement as hegemony in the Caribbean region.

Rooselvet took advantage of the default of payments and the war threat declared by Europe to justify his intervention, reinterpreting the Monroe Doctrine of 1823 that was later modified by the Roosevelt Colorada in 1904, declaring that the United States would intervene “against its will” when a nation did not behave in a “civilized and responsible” way, giving theoretical support to the intervention as international police in the Venezuelan conflict and to the subsequent interventions in the Dominican Republic, Nicaragua and Haiti.

The “pacification” of the naval blockade resulted in the diplomatic recognition of the Venezuelan government’s obligation to its foreign creditors, who, on the other hand, did not receive any condemnation from the United States before the evident use of force to achieve its stipulated will.

LESSONS FOR THE PRESENT
Although the US government was favored by the naval blockade, laying the foundations of what would be its interventionist foreign policy in the continent and guaranteeing the control of raw material and maritime routes for future incursions in the XX century wars, the aggression of the European countries aroused a general rejection in the young Latin American nations, which shared the same trait of having become indebted in their own processes of constitution as States.

The alarming use of war resources in Venezuela made the region conceive the basis of the prohibition of the use of force that later became part of international law. In this regard, the clearest position was the declaration of the Argentine government, which gave birth to the Drago Doctrine.

The answer was drawn by Luis María Drago, an Argentine jurist who between 1902 and 1903 served as the Minister of Foreign Affairs of his country and expressed the principle of prohibition of interference in the internal affairs of nations for the preservation of peace.

Drago rejected the imperial move by declaring that these procedures “would set a dangerous precedent for the security and peace of the nations of this part of America.” The military collection of loans implies territorial occupation to make it effective and the territorial occupation means the suppression or subordination of local governments in the countries to which it extends”.

Their considerations were directed exclusively to the United States and Europe and were adopted by the Hague conference with some modifications to limit the use of force in the collection of contractual debts from one government to another.

Despite the fact that in the years that followed, the country was subjected to the dark military dictatorship of Juan Vicente Gómez that ended up responding to foreign interests, the diplomatic action of Argentina endorsed by the Latin American countries, together with the national unity of the population Venezuelan in favor of Castro’s call to defend national sovereignty, were two important capitalizations that arose from the dissuasion of war and that should be mentioned.

The behavior of respect for self-determination that the nascent republics demanded, despite having weak institutions and suffering the structural consequences of the independence wars, make historical noise with respect to the warmongering positions of the countries that sought to define the new balance of powers on the global map.

More than 100 years later, Venezuela, both for its energy resources and for the project of integration into the multipolar world it develops, is once again the continental epicenter that defines the global reordering of the powers, with China and Russia on the horizon.

To this event comes the United States, dusting off the manual of the “big stick”, before the creative exhaustion of the American elite to maintain hegemonic control. It does not arrive as an arbitrator and, in its eagerness to isolate the emerging world, puts its own participation in the new global leadership at risk.

Just as the naval blockade of 1902 marked the dawn of Washington’s continental hegemony, today’s financial aggressions and threats of war against Venezuela are angety measures that seem to close the interventionist century in the region, given the increasingly unlikely scenario of resuming the power of the country on the part of great western capital.