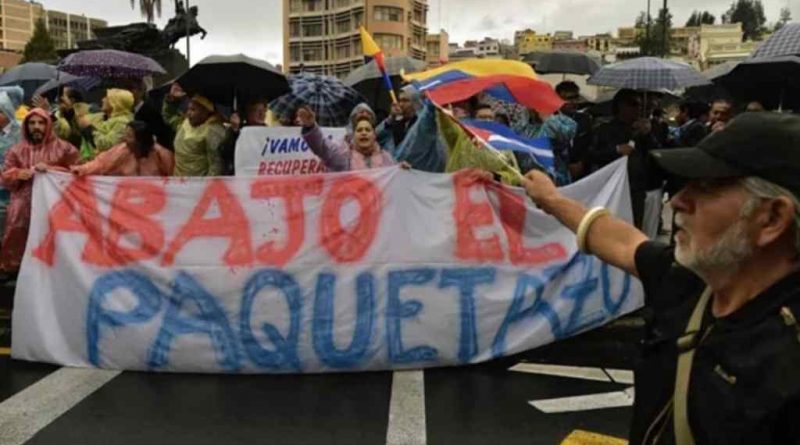 Former Vice-President Elias Jaua looks at the current anti-neoliberal uprisings in Ecuador and Argentina through the lens of decades of similar struggle in Venezuela.

Recent events these past weeks leave no doubt that the people are very wise.

The strong popular rejection of [Mauricio] Macri’s government and its policies in Argentina (1); the institutional crisis in Peru (2); social upheaval in Colombia, unfortunately amid a new massacre of social leaders (3); and social protests and political instability in several countries in the region and the popular rebellion in Ecuador, in development, (4) are evidence that our societies have been inoculated against the neoliberal recipe.

In Latin America, all of us were sold that recipe, which was applied in the early 1990s, under the idea that monetary restriction was an antidote to the evil of inflation. Privatize, reduce social “spending,” freeze wages, liberalize imports and prices, weaken labor relations, these were the main steps to be taken to cure the economic ills stemming from our “populism.”

“Hold on a bit longer, austerity is only for the short term, later on the champagne glass will trickle down to everyone,” was the meta-story of the monetarist choir of the time, and it is the same line used today.

However, the cure turned out worse than the disease.

By the end of the 1990s, the region’s gross domestic product (GDP) had fallen dramatically. Poverty and inequality had also increased, and there was a drastic de-industrialization and loss of sovereignty over our resources. Chaos, as well as social and political violence among other aggravated evils, prevailed in all our nations.

In the first decade of the 21st century, our peoples’ struggle against the previous decade’s neoliberal model created the conditions for the emergence of a popular democratic leadership that attained political power in most Latin American countries.

This leadership enabled the development of a sovereign and inclusive economic model in each of these countries.

We, the Venezuelan people, alongside Commander [Hugo] Chavez, were the forerunners of this insurgency through the [Caracazo] popular rebellion of 1989, the 1992 [4F] military rebellion, Chavez’s 1998 electoral victory and the popular adoption of the first constitution that safeguarded against neoliberalism, the current Bolivarian Constitution of 1999.

Sound state intervention in all our countries during the period of the so-called progressive governments allowed the region to maintain sustained GDP growth. This was achieved through policies including the recovery of economic control, the defense and restoration of sovereignty over our assets and resources, the restitution of labor and social rights, the expansion of the purchasing power of the working people, and the support and massive financing for national production.

As such, both the historic social inequality and poverty decreased, and we would become the region with the greatest political stability in the world and with significant advances in the integration and unity of our peoples.

As we contrast the two models and their results, no one can be surprised with what is currently happening on the streets of Ecuador and other countries.

The people are not going to let themselves be sacrificed again for the sake of a model that offers them hunger today and breadcrumbs tomorrow. People have proved that we can live with equality, justice and dignity, and they will fight for it. They will always fight.

Here in our homeland, we must cast out any doubts about the urgent need to recover our model of economic control. If we want to avoid greater ills, we must ignore the siren chants of monetarist fundamentalism. It is in the midst of economic aggression and blockade when we must stay furthest away from the neoliberal fallacy.

Today, the phrase of Commander Chavez is more relevant than ever: “Neoliberalism is the way to hell.” Likewise is the reaffirmation of our economic path through the 2012 Homeland Plan which we approved some 7 years ago when we last elected Hugo Chavez as president. Chavez told us in that plan that “We will continue to shape a system of social relations of production, based on the values of knowledge and work and at the service of the full satisfaction of the human needs of our people.”

Alongside [Simon] Bolivar, we can say that faltering is losing ourselves. It is through Chavez’s way, and no other, that our people will clear the horizon towards a better future.

Notes
(1) Public cutbacks, real wage decreases, spiraling inflation, and the agreement of huge IMF aid packages for Argentina have meant that Macri is trailing in the initial voting tendencies to the progressive and Kirchner-esque candidate of Alberto Fernandez in the upcoming Argentinian presidential elections, scheduled for November 24.

(2) Sitting Peruvian President Martin Vizcarra dissolved the opposition controlled parliament late in September and called for early parliamentary elections in order to force through his nominations for the Supreme Court, sparking accusations of a coup and international and local condemnation.

(3) Protests, led by left wing sectors and students, have rocked the Colombian capital Bogota in recent weeks. Likewise, the return to arms of a faction of the FARC-EP has sparked a new wave of persecution against social leaders, mayoral candidates, and trade unionists in the country.

(4) Indigenous and left wing groups have led anti-neoliberal protests in Ecuador this week, which stormed the parliament building, forced the government of Lenin Moreno to move to the country’s second city, and brought the capital Quito to a halt. The protests were sparked by Moreno’s move to eradicate a state subsidy on fuel and agree to an IMF bailout package conditioned on labor law changes and other austerity policies. Moreno was eventually forced to walk back the measures.

Featured image: The people of Ecuador, who are protesting against neoliberal austerity measures, have received much solidarity from Venezuela. (Archive)