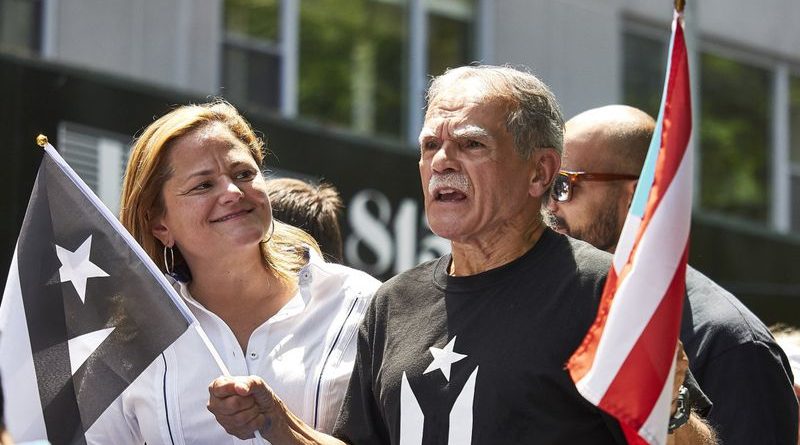 New York, NY – Over 300 people gathered at Columbus Circle in New York City on September 21 to rally and march for Puerto Rican independence. The action was just one of many organized by various groups around different issues over the weekend, in response to the United Nations General Assembly.

The rally started with a series of speeches and chants. The crowd then marched to Dag Hammarskjöld Plaza, near the UN. The program continued with speeches from Puerto Rican, oppressed nationality, and solidarity organizations.

Lorraine Liriano, one of the emcees from A Call to Action on Puerto Rico, led chants and encouraged the crowd to continue fighting for liberation.

“We don’t need to be given our freedom. We need to fight for our freedom,” said Liriano.

One notable speaker of the day was Oscar Lopez Rivera, a prominent Puerto Rican liberation activist and freed political prisoner. Rivera spoke about the importance of Puerto Ricans being unafraid to fight back against U.S. imperialism, and for the youth to continue the struggle. He also emphasized the need for solidarity with other countries under attack by the United States, including Cuba, Venezuela, Bolivia and Nicaragua.

RELATED CONTENT: Trump: “Puerto Rico, One of the Most Corrupt Places on Earth”

“Imperialism will never stop trying to destroy anything that is against it,” said Rivera. “In Cuba right now, we have an embargo, trying to stop Cuba from moving forward. All of us have the obligation to give support to Cuba. Cuba has shown us what solidarity is all about. Cuba has shown us that we could defeat imperialism.”

The rally ended with a cultural performance and music. The action was organized by Frente Independista Boricua and NY Boricua Resistance.