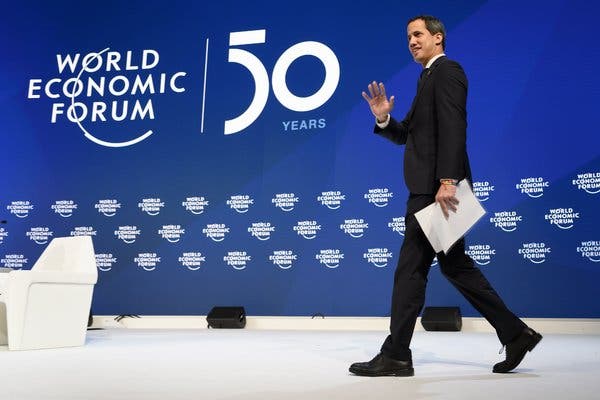 The US newspaper The New York Times highlighted on Thursday in a journalistic piece, the failure of the Venezuelan deputy Juan Guaidó in his participation in the World Economic Forum, held in Davos, Switzerland, which he attended as alleged Venezuelan interim president. From the beginning, the US media refers to the failure of his participation in the event, headlining their article: “Guaidó, promising a change for Venezuela, fails to conquer Davos. ”

The article is written by Mark Landler, head of the London offices of the New York newspaper, who has been working there for 27 years. He has also been a correspondent for economics sources in Europe and a reporter for the business bureau in New York.

In its content, the New York Times piece recounts the events presented during the participation of Guaidó, in which he was answering questions about why the president of the Bolivarian Republic of Venezuela, Nicolás Maduro, remained in power after a year of his self-proclamation as supposed “president in charge” of the country, with the support of the United States.

“But as Mr. Guaidó made the rounds at this year’s gathering of political and business figures — having come to Europe in defiance of a travel ban at home — he seemed like a man whose moment had passed,” the piece said.

Similarly, it emphasized that, despite having the support of the US since the beginning of 2019, Guaido never held a meeting with US President Donald Trump in Davos, besides highlighting the absence of former National Security adviser, John Bolton, who was fired last year by the US president.

“Mr. Trump did not even mention Venezuela in his speech at Davos,” said the influential US outlet. Trump held -at least- 5 bilateral meetings during his visit to Davos according to the White House youtube coverage.

During his speech -the outlet reported- the right-wing parliamentarian “found it difficult to offer fresh ideas” to get support from European countries for his intention to tighten the aggression against the South American nation.

“Venezuela is already under harsh sanctions, which until now have failed to get Maduro out. In an election year, the United States is much less likely to consider more aggressive options like a military intervention,”says the newspaper, referring to the coercive measures imposed on Venezuela that have caused losses in the millions, with the aim of overthrowing the Bolivarian Revolution.

Among the questions asked of Guaidó is the supposed support of military forces. On this fact, the opposition deputy said that they offered the military a kind of “amnesty” to those who “turned their backs” on the President of the Republic, Nicolás Maduro; nevertheless “it did not sit well with high ranking officers.”

On repeated occasions, the deputy, together with members of the Donald Trump administration, have called on the officers of the Bolivarian National Armed Forces (FANB) to “turn their backs” on the head of state. “They remain their bastion of support,” Guaidó emphasized to a half empty room in Davos.